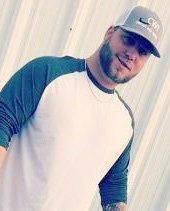 Tyler DWayne Lowe-Brock died September 3, 2021 east of Lexington at the age of 25 years 11 months 23 days. Funeral Services were held Friday, September 10, 2021 at the Wanette First Baptist Church. Interment followed at the Wanette Cemetery, entrusted to the care of Wadley’s Funeral Service. Online condolences may be made and service live streamed at www.wadleysfuneralservice.com.

Tyler was born September 11, 1995 in Norman, Oklahoma, to Kevin Philip Lowe and Kristina Kay Salyer. He was raised and attended school in Wanette.

When he was younger, Tyler loved playing baseball as well as riding sheep (mutton busting), and then moved up to calves. Tyler enjoyed hunting, fishing, riding dirt bikes and side by sides. He was always the life of the party, laughing, etc. He was a hard worker, and enjoyed breaking things, and aggravating his family and friends. Tyler loved spending time with his family, especially his children, Tatum and Taylen.

Tyler was preceded in death by his grandfather, Danny Salyer and his grandparents, Tom and Sue Estell.

Survivors include his parents, Kristina Brock and husband, Charles, of Wanette; his father, Kevin Lowe and wife, Billie, of Noble; his children, Tatum Dean Lowe and Taylen D’Ann Lowe;  his significant other, Teri Williamson of Wanette;  his siblings,  Josh Wood and wife, Taylor, of Oklahoma City, Kelby Wood and wife, Kiya, of Oklahoma City, Taylor Williamson and husband, Dakota, of Lexington, Trip Weaver-Lowe of Moore, Tristan Weaver-Lowe of Moore, Kristyn Dieterich and husband, Kyle, of Crescent, Charlotte Loessin and husband, Colton, of Norman, Kaleb Brock of Norman and Charles R. Brock of Pennsylvania; his grandmother, Marilyn Salyer of Wanette; his grandparents, Sharon and Kenny Roberts of Stigler; his aunt, Kellie Lowe of Newalla; his uncle, Kris Lowe and wife, Angie, of Norman; and numerous other relatives and friends.