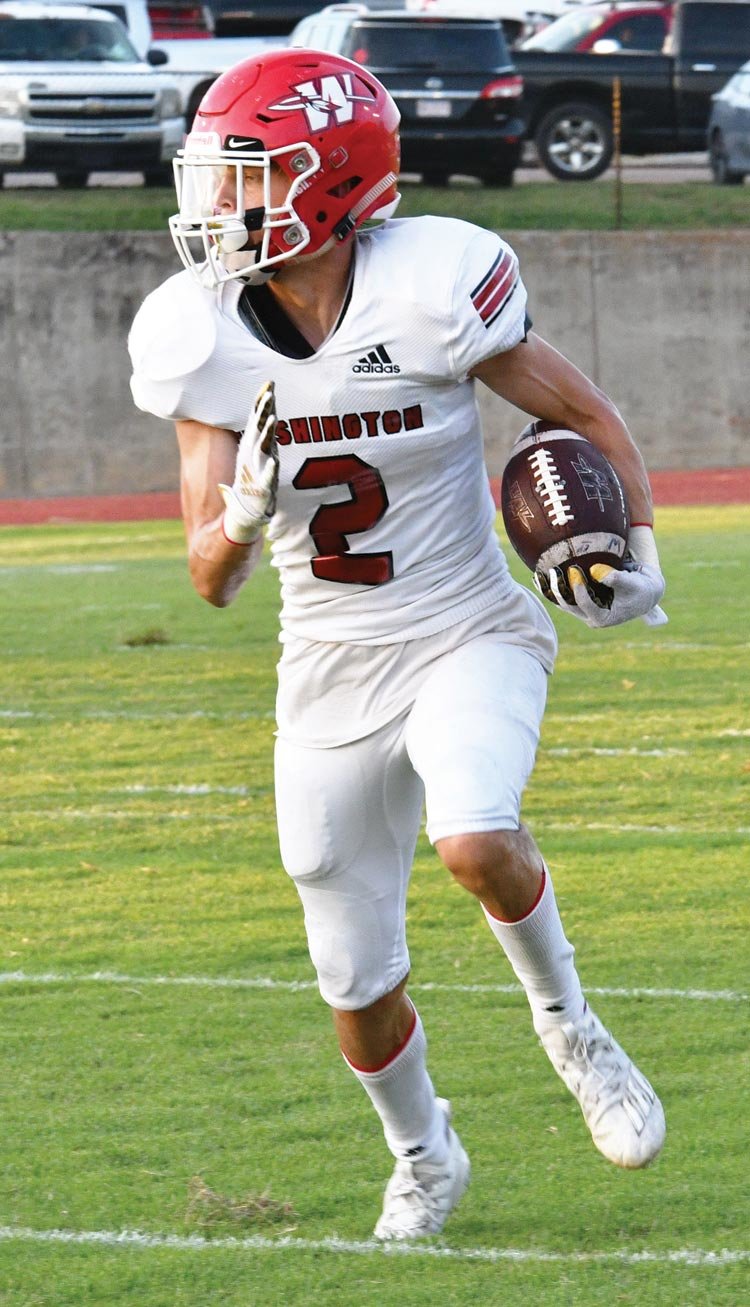 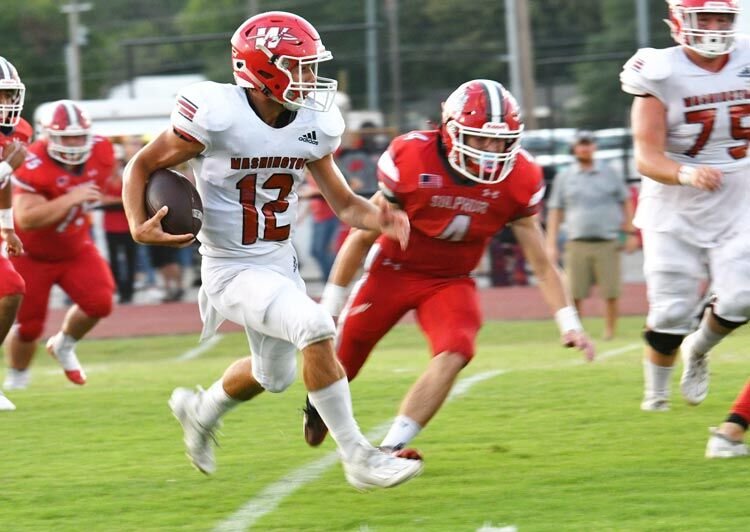 Emitt Wilk carries the ball for Washington Friday night during the Warriors’ 31-20 victory over Sulphur. Wilk also had a 70-yard touchdown pass to Luke Hendrix in the game.

Not one but two goal line stands by the vaunted Washington defense not only set the tone for the game in Murray County last Friday night but eventually set up a 31-20 victory for the Warriors.

“It was a great team win,” head coach Brad Beller said. “For a young, inexperienced team it was a great confidence booster.”

After a Washington punt was returned to the Warrior 15, the first defensive stop was cued up.

Sulphur had a first and goal inside the Washington five yard line and were stuffed.

The Warriors coughed up a fumble and Sulphur was in business again inside the Warrior 10 yard line.

“The defense set the tone for the whole game,” Beller said. “After those two goal line stands you could see our confidence grow and we felt like we could win the game. You could feel the energy on the sidelines and in the stands.”

That allowed the Warrior offense to get into gear.

Kaden DuBois opened the scoring in the second quarter with a school record 51-yard field goal.

After Sulphur scored to go ahead 7-3 Washington took over.

Emitt Wilk hit junior Luke Hendrix over the top for a 70-yard touchdown pitch and catch.

Sophomore quarterback Jaxon Hendrix stepped in when Wilk had a calf injury and found Hendrix for a 65 yard touchdown play.

“Jaxon was poised and did a great job,” Beller said.

Even when Wilk was able to return Hendrix stayed at quarterback and Wilk moved to the slot receiver spot.

The Warriors finished with 172 yards rushing and 212 yards passing.

“We pretty well took control in the third and fourth quarters,” Beller said.

Washington eventually built their lead to 24-7 and led 31-13 before Sulphur scored their final touchdown of the evening.

But the night belonged to the Washington defense.

“They really played well. And, our two inside linebackers Chase Allison and Jadon Sanchez played great all night,” the coach continued.

Junior defensive back Lane Steele put an end to another Bulldog threat picking off a pass in the second quarter.

Unlike last week when the Warriors had a difficult time moving the ball on the ground, Beller noted how much improvement the offensive line showed against Sulphur.

“They did an excellent job of stepping up and picking up the blitzes,” Beller said. “Sulphur gave us a different set, one that we hadn’t seen before. They didn’t panic and were very physical.”

“They were motivated and proved that we are a bounce team,” the coach said. “We were able to run the ball effectively.”

“He was a game changer last Friday,” Beller said. “He had four catches for 186 yards and two touchdowns.”

Up next for the Warriors is the 2020 home opener when Lindsay comes to town Friday night for a 7 p.m. kick off.

The Leopards are 0-1, losing last week at home to Purcell.

They run a spread offense and operate out of a 3-4 on defense.

“The key for us is to slow their passing game down,” Beller said. “Their quarterback is experienced and does a great job of running the show. We have to limit their offensive capabilities.

“They are aggressive on defense. They fly around. We have to keep them off balance and not let them pin their ears back get into the backfield.”

Hendrix had four pass receptions for 186 yards and two touchdowns against Sulphur.

The Defensive Lineman of the Week nomination went to Rope Scott.

Scott finished with seven tackles including two for losses.

Seth Tague was nominated as the Offensive Player of the Week. He graded out at 86 percent against the Bulldogs.

Beller nominated Chase Allison as the Defensive Player of the Week.