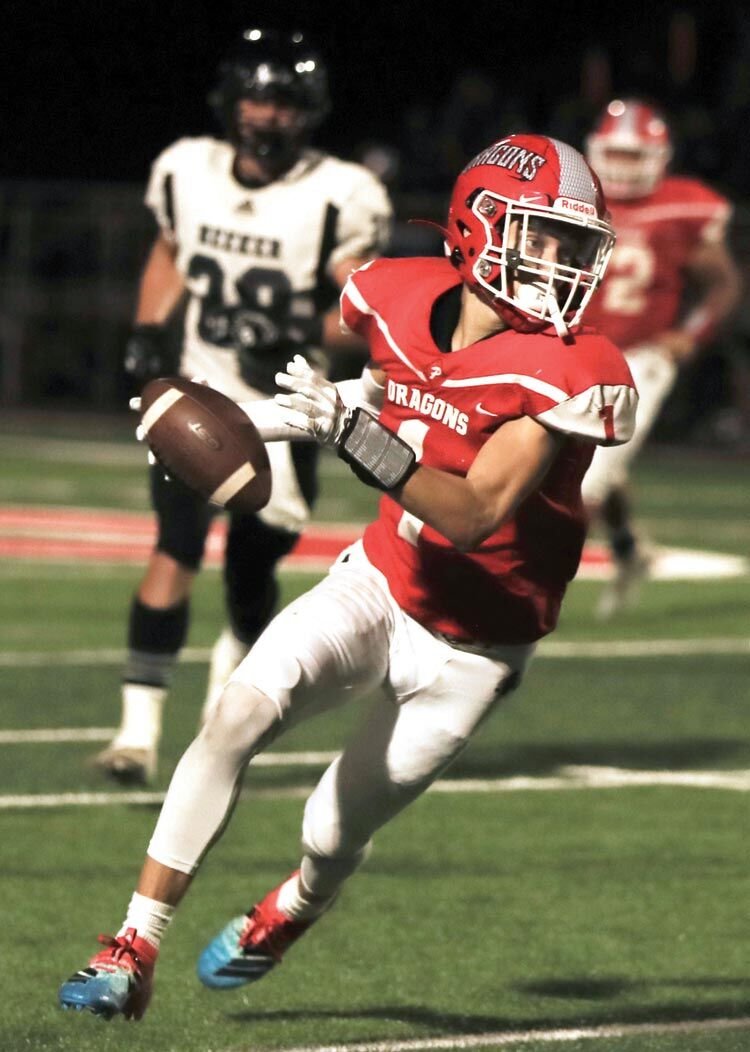 Mojo Browning picks up part of his 174 receiving yards against Meeker Friday night. Browning also had a pick six in the game. The Dragons were defeated 25-24 by the Bulldogs. 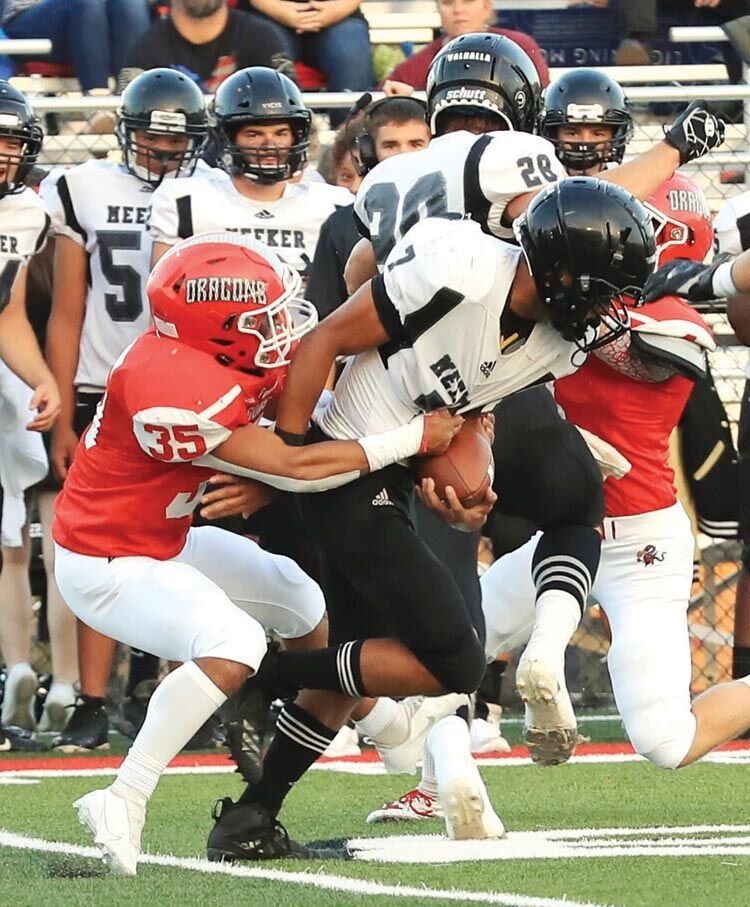 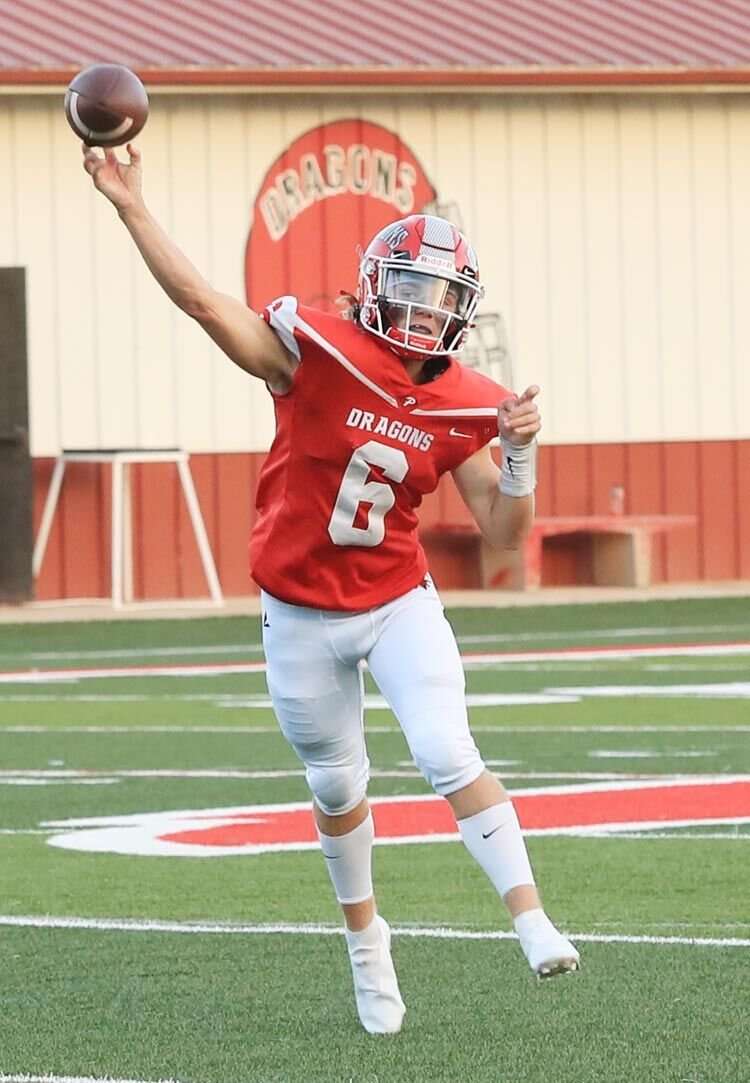 Kody Kroth lets a pass fly Friday night against Meeker. The Dragons fell to the Bulldogs 25-24. 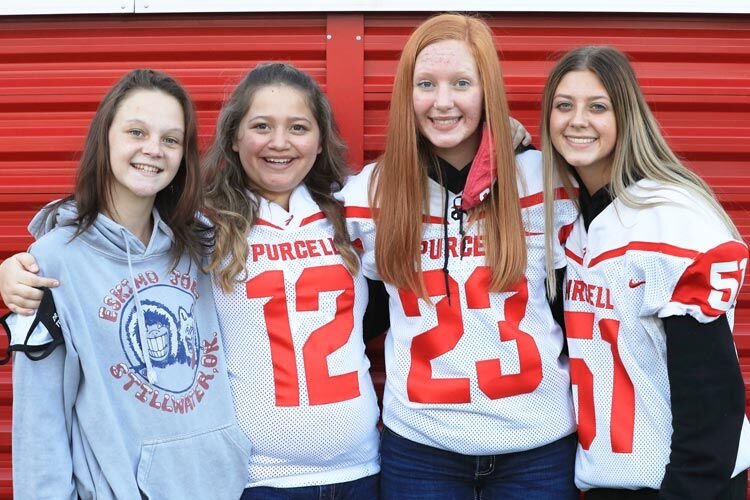 A basket full of mistakes last Friday night at Conger Field led to Purcell’s second one point home loss of the 2020 football season.

Meeker scored its final touchdown with 2:50 left in the game to edge the Dragons 25-24 in a game that went back and forth all night long.

A turnover by the Dragons led to Meeker’s first score of the game. The Bulldogs eventually built a 13-0 lead in the second period but Mojo Browning’s pick six sent the players to the halftime locker room with the score 13-6.

Purcell scored the next two touchdowns to forge an 18-13 lead.

That’s when quarterback Kody Kroth hit Mojo Browning on a beautiful 56 yard touchdown pass and run when the Dragons retook the lead, 24-19.

The Dragons turned the ball over after Meeker’s last score but got the ball back with about a minute to play but couldn’t get to the end zone before the clock ran out.

Kroth was 19-42 for 293 yards, two touchdowns and two interceptions.

Browning had 10 catches for 174 yards and a touchdown.

Head coach Tracy Scott said several players played well on the defensive side of the ball.

“We had to play pretty well defensively due to all the stinking turnovers,” he said. “Sam Wofford played really well. “We played pretty good defense considering how often they got the ball on our side of the field.”

Wofford led the squad with 18 tackles. Smith had 14.

Marquez had 12 tackles from his defensive lineman position.

“Dayton Smith played really well and so did Creed Smith and Mojo at corner,” the coach continued. “Up front, Johnny Marquez, Jaysen Shea and Mateo Ramirez all played well. And other guys are starting to play better.

“We’ve just got to be able to run the football and we can’t right now,” the coach confirmed. “We’ve just got to get it together on both sides of the ball. We’re off this week so we’re going to focus on getting better. There’s a lot of work to do,” Scott concluded.

Scott nominated Johnny Marquez as the Defensive Lineman of the Week.