Touching the face of God 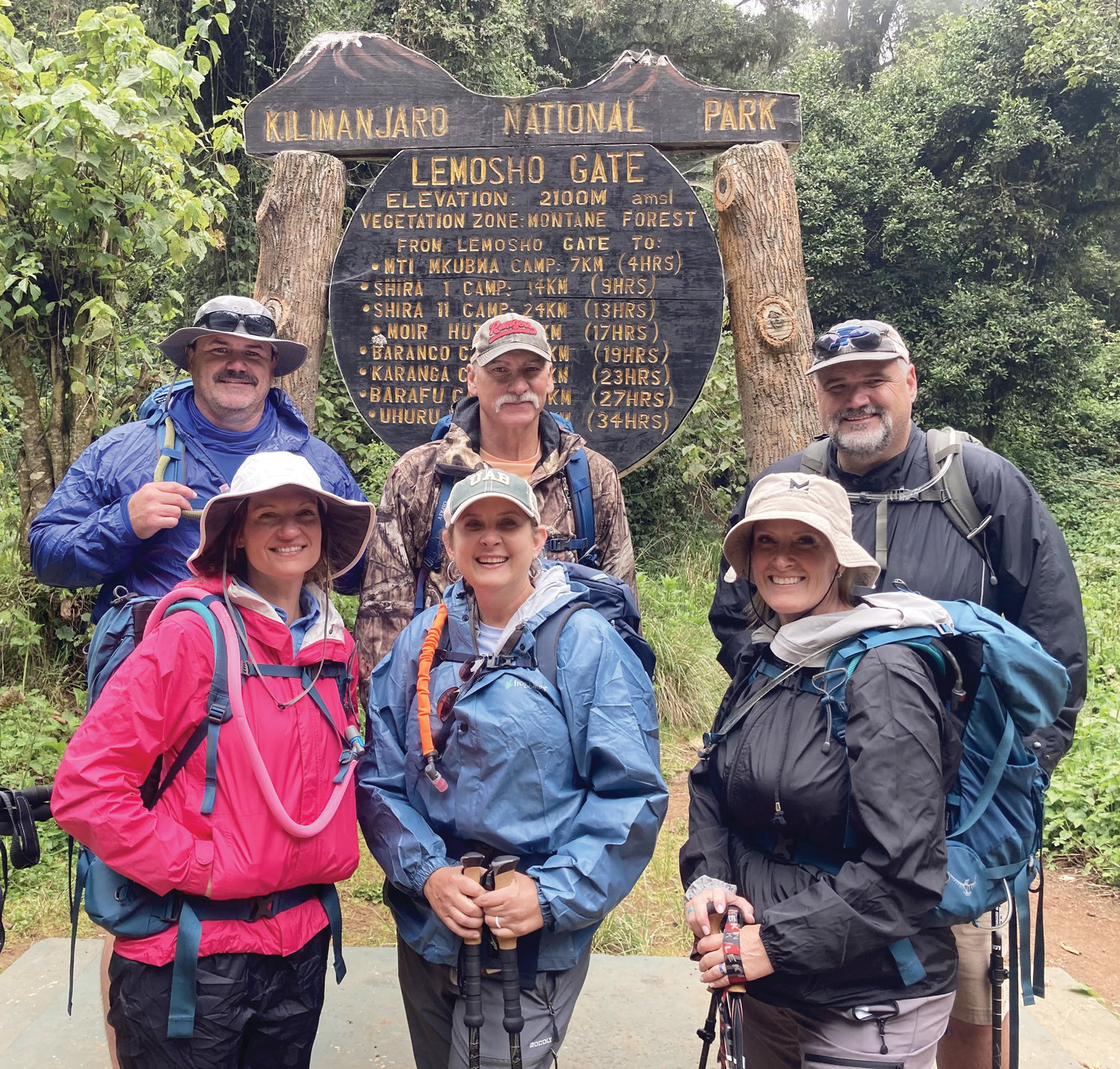 On their way in Kilimanjaro National Park, from left, back row, Justin Carr, Vince Fulks and Ted Cox. On the front row are Nicolle Carr, Kimberly Fulks and Lori Cox. 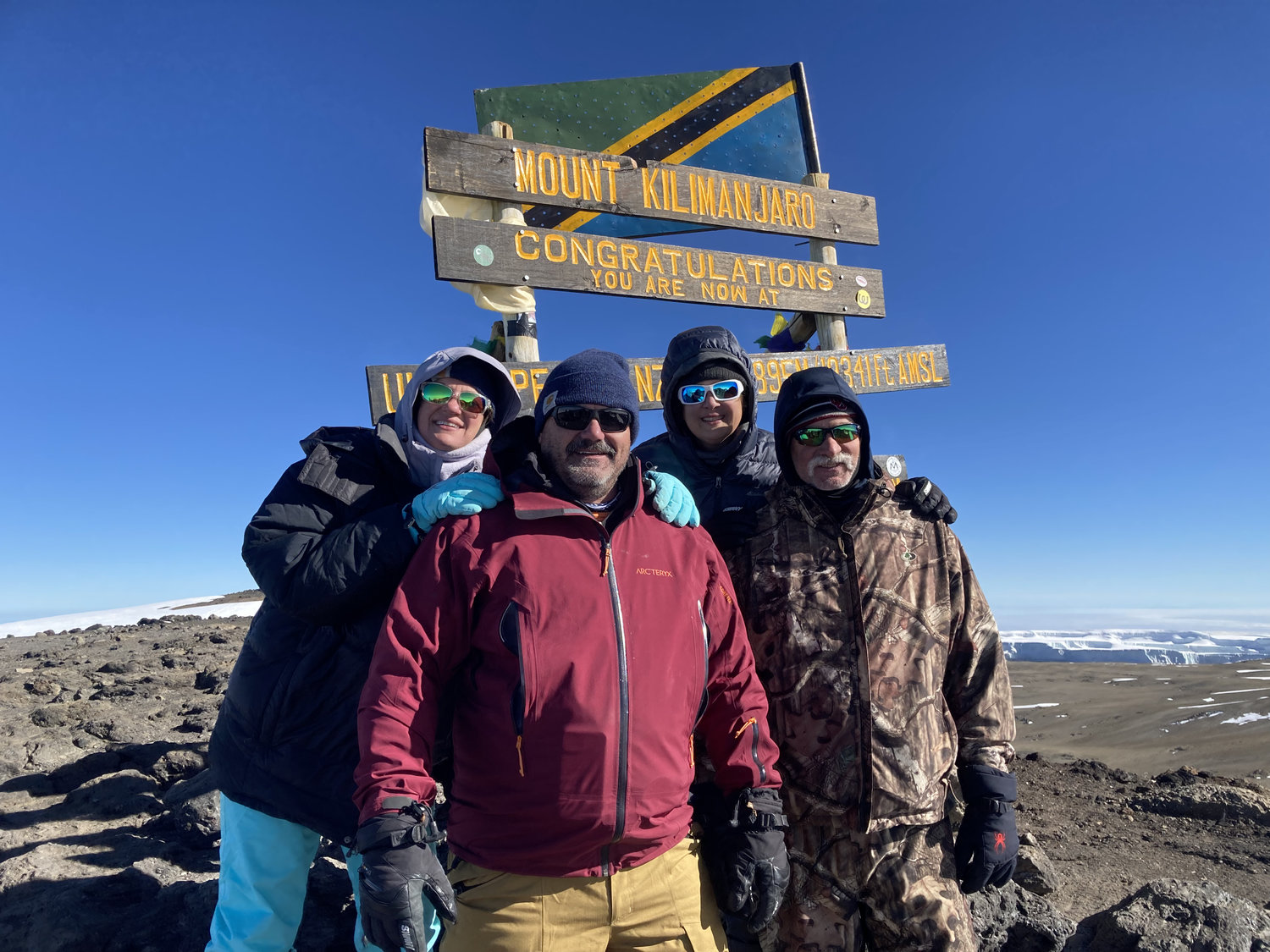 Vince and Kimberly Fulks are flatlanders bred and born.

He is 53 and coaches the Paoli Pugs in football. She is 50 and a breast cancer survivor.

At home on the plains, neither is a mountain climber.

Or weren’t until this summer when they scaled all 19,340 feet of Mount Kilimanjaro in Tanzania.

“Justin and Nicolle Carr came up with this crazy idea and we invited ourselves,” Vince said.

Soon, Ted and Lori Cox invited themselves, as well.

They began conditioning themselves for the mountain.

Their training consisted of “just a lot of walking” and trips to the Ouchita Mountains in southeast Oklahoma where Vince grew up.

“My family is from southeast Oklahoma and that helped me to know how to walk up steep slopes,” he said.

There were also two trips to Pikes Peak in Colorado to acclimate themselves to high altitude, although Pikes Peak’s elevation – 14,115 feet – doesn’t really compare to Kilimanjaro’s 19,340 feet.

In Colorado, they concentrated their training on the Devil’s Playground and its seven-mile trail rising 4,300 feet to the Pikes Peak summit.

Kimberly bought Vince a mask that he could adjust to duplicate Kilimanjaro’s elevation.

“I ran with the mask on to see if I could compensate for the lack of oxygen,” he said.

A six-mile hike at home took roughly an hour. Six miles on Kilimanjaro was all day.

“We would walk five or six miles a day,” Kimberly added. “It’s very easy to do six or seven miles in Oklahoma compared to two miles on the mountain.”

The couples carefully researched guide companies – no one is allowed on the mountain without permits and a licensed guide company.

Eventually, they settled on Ramblin’ Travel. The company is owned by Bobby Fuller, a mountain climber and guide here in the States.

The company is run by natives in Tanzania.

The Oklahomans left June 20 for their three-week adventure. Vince estimated the cost for himself and Kimberly between $16 and $20,000.

They also booked a safari on the side.

“They tricked me by telling me we could fish in Lake Victoria,” he said.

The lake was “absolutely beautiful” and worth the side trip, even if the fishing wasn’t as expected.

From guides and porters to a chef and waiter, the native staff on Kilimanjaro was “phenomenal,” Vince said.

“They treat you like family,” he explained.
“We let them into our world and they let us into theirs.”

On the mountain they were confronted with five climate zones – rain forest, heath land, moorland, alpine desert and arctic.

They would spend eight days reaching the summit, Uhuru Peak.

The peak is one of seven summits of the world – the highest mountains on each of the earth’s seven continents.

Every day (or night) they hiked high and then low to their camp.

Vince said the only time the height was an issue was on one of the walls.

The rest of the time it was just a matter of putting one foot in front of the other.

“We had to have permits and guides at all times,” he continued. “I’m really glad we picked who we picked. Our guide was Brown and he wanted to know everything about you medically.”

Kimberly said the Oklahoma group was unlike his usual clientele.

“We were very different from the others,” she said.

The climbers’ diet had to be carefully monitored and protein intake was limited as they gained elevation.

“The mental prep is a lot of it,” Kimberly said.

She face planted on rocks early on the climb, but at each stage hid her pain and presented herself as fit to continue.

The guide had the power to send anyone he deemed unfit to continue back down the mountain.

She hid, as well, the pain in her back where surgeon’s removed a muscle during her 2017 treatment for breast cancer.

There was a ranger station at each campsite. The rangers are there to keep an eye on porters who weren’t supposed to carry more than 30 pounds.

In a group of six, not everyone could hike at the same speed.

Kimberly was slowest in the group and left camp before the others, who would catch up to her on each leg.

As they gained elevation, the day’s hikes got underway in the middle of the night when the ground was frozen.

Footing became treacherous when the sun thawed the ground.

Above the clouds, the warmth of the day was instantaneous as soon as the sun’s rays reached the ground.

On the eighth day, Vince and Kimberly reached the summit at Stella Point.

They continued to walk another hour, covering 500 feet to Uhuru Peak.

They were told they would cry on reaching Uhuru Peak. So did their native staff, sharing their joy.

“The summit was more of my own journey by myself,” Kimberly said. “There’s emotion that comes with it. It’s very spiritual, the most incredible experience I ever had in my life. I talked to God a lot and don’t remember much of walking by myself.”

Vince was the most physically fit of the group and the only one to reach Uhuru Peak carrying a backpack.

That said, all mountains from this day forward are “safe from me.”

“After eight days, my back said ‘No more.’ It’s something I don’t want to do again.”