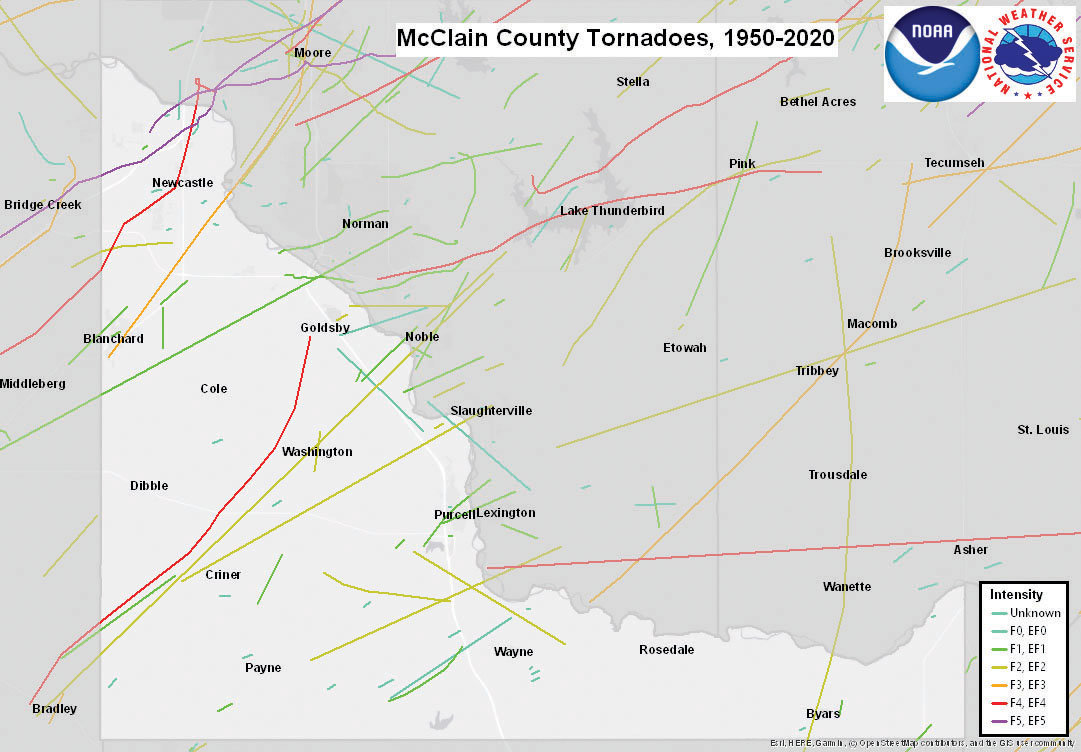 Tornadoes aren’t unknown in McClain County and take many tracks across the county, as this graphic illustrates. The National Weather service changed the Fujita Scale (F) to the Enhanced Fujita Scale (EF) Feb. 1, 2007.
Posted Thursday, March 17, 2022 9:00 am
Jeannie Grimes

Don’t think they can’t happen here. Or now. Or then.

Because tornadoes can – and do – happen everywhere. At any time. In any season.

Pigeon-holing the most violent storm in Mother Nature’s devastating weather arsenal is a serious lapse of judgment.

The National Weather Service reports McClain County was visited by 64 tornadoes from 1950 through 2019.

The strength of two tornadoes went in the books as unknown.

The tornado that day churned a swath 3 miles long and 200 yards wide.

Three more would lose their lives and 56 were injured when a tornado took a 52-mile path across northern McClain County and into Cleveland, Pottawatomie and Lincoln Counties on April 30, 1949.

That same day, a separate tornado was on the ground for 25 miles from southeast of Lindsay to near Wayne. One person was reported injured.

Granted  most of the tornadic storms occur in the spring.

But don’t take that as a given for all tornadoes.

The F3 tornado claimed eight lives and injured 46 on its 24-mile path from Blanchard to Moore, Del City and southeast Oklahoma City.

Most people will recall the May 3,1999, tornado. On the ground for 38 miles, this F5 monster killed 36 people from Bridge Creek to Midwest City  and injured 583.

Then on May 20, 2013, another the skies brought more death and destruction along nearly the same path.

Seven of the 24 fatalities that day were elementary school children crushed under a collapsed wall at Plaza Towers Elementary School.

It is possible to survive even in an F5 tornado. But first, remember, there are no public storm shelters in Purcell.

According to FEMA, these are the steps to take and things to not do:

For more information on how to prepare for tornadoes, build a safe room or clean up after a disaster, visit Ready.gov.