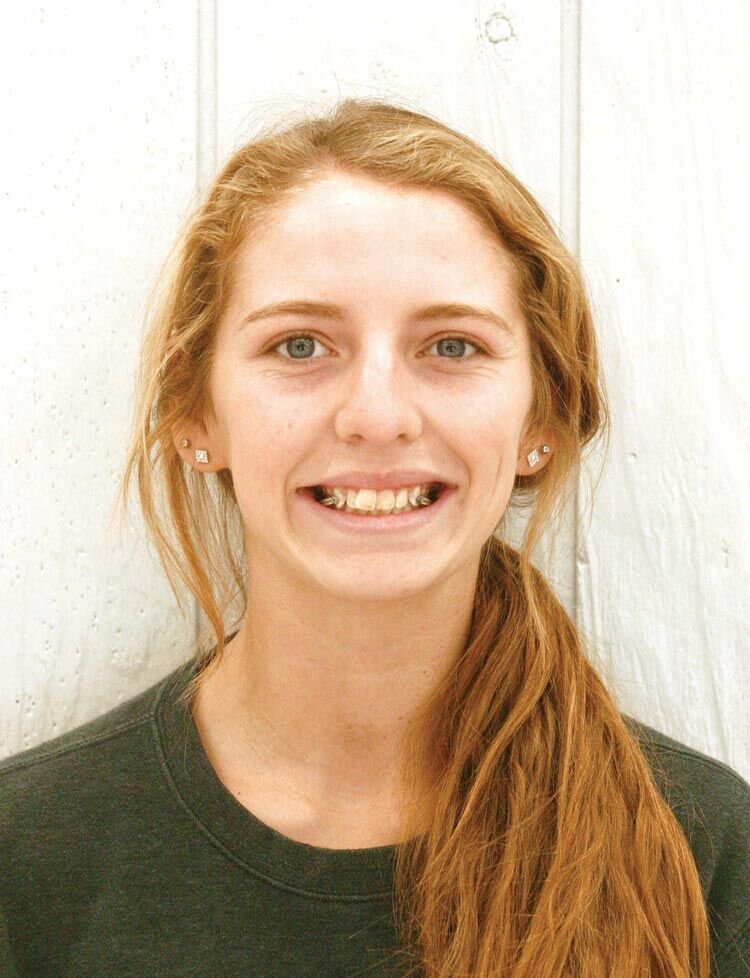 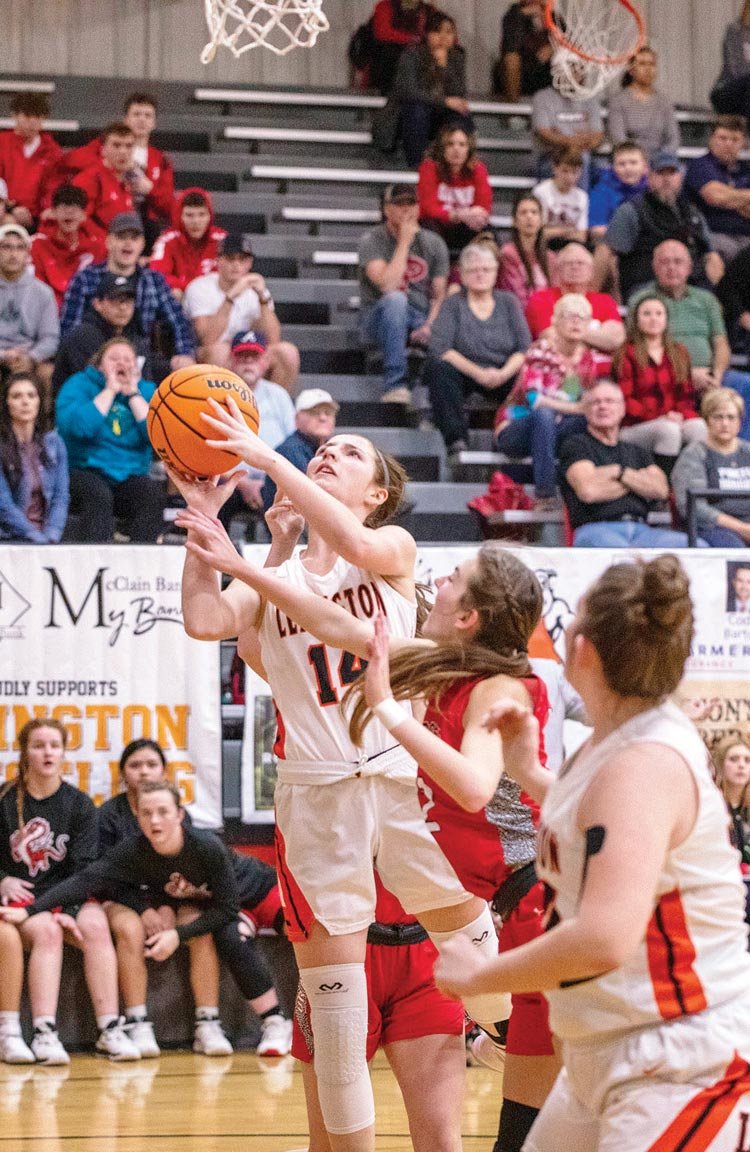 Emilee Jenks fights for a rebound this past season against Purcell. She averaged 10.2 points per game along with eight rebounds and 2.8 assists per game as a senior at Lexington.

Emilee Jenks of Lexington is getting ready to start her freshman year at Seminole State College.

One would think that a two-sport athlete with a great academic record would want to take some time to relax – just a little – this summer.

But, that’s not the case with Jenks. She was hard at work on her father’s farm last Friday.

She might have been tired and weary from a hard day’s job out in the hot sun. But, there’s no room for rest in her world. She’s a go-getter.

“I’ve been working on my father’s ranch and I work at a day care also,” Jenks said. “Sometimes I get some rest but I’ve been pretty busy this summer. It’s been worth it.”

Jenks was a two-sport standout for the Lexington Lady ‘Dawgs in both softball and basketball.

In softball, she played both fast-pitch and slow-pitch with abandon – always hustling, always entertaining.

She’s going to play softball at Seminole State and get her degree in business.

During her fast-pitch career in the late summer and fall, Jenks was simply an outstanding slugger and all-around player for the ‘Lady Dawgs.

During her 2019 senior season of fast-pitch, Jenks hit the ball for a .459 batting average along with .512 on-base percentage and an .811 slugging percentage.

She had 34 hits, eight doubles, six triples, two home runs, and 19 runs batted in. Jenks helped the Lady ‘Dawgs to their first-ever appearance at the Class 3A fast-pitch State tournament in Shawnee.

Lexington lost to Washington, 5-1, in the quarterfinals to finish the year at 17-6 - but having won 14 of their final 17 contests.

In the spring of 2019 during her junior year, Jenks hit a blistering .658 with 17 home runs and 42 RBIs during the slow-pitch season.

Lexington lost to Muldrow, 8-7, in a Class 5A Regional tournament to end the season 13-12 after a slow and sluggish start.

In the spring of 2018 during her sophomore season, Lexington made it to the Class 5A slow-pitch State tournament and ended the year 22-6 following a 17-7 loss to Heavener in the quarterfinals.

“She’s a great kid and one of the best all-around athletes that I’ve coached,” Lexington head softball coach Kayla Stewart said. “She’s very athletic. She can run the bases, she can hit the ball, and she can play anywhere on the field. She plays basketball, too. She’s just an athletic kid and very talented.”

Jenks was a versatile player for Stewart who wasn’t afraid to play her anywhere on the field.

“What position did she not play for us?,” Stewart said. “I mean, she can play anywhere on the field. She played third for us this last year in fast-pitch. But, she also played shortstop, second base, and some outfield for us. We were able to move her around when an injury happened to another player. She was very versatile and she succeeded at whatever position I put her at.”

Jenks simply had a great time on the diamond with her close friends at Lexington. She played with fellow seniors Amanda Graddy, Kaylee Fink, Hannah Robbins, Anna Sample, Lauren Beason, and Lindsey Barber.

“It was a great journey playing softball,” Jenks said. “My favorite part was just playing with the girls. We all got so close and we made the best of it. I had so much fun in softball and they’re the best friends I could ever have. When I moved to Lexington, they instantly made me feel welcome. I felt like I had been around them forever.”

Jenks made the short move with her family from Wayne to Lexington when she was in the sixth grade. Her father’s name is Mike Jenks. Her mother’s name is Tasha Creswell.

Emily has two sisters named Madysen and Haylee. She also has a brother named Brady Vanschuyler.

Jenks was looking forward to making the slow-pitch State tournament in the spring. But, the worldwide outbreak of the Covid-19 virus put a sudden halt to the season as well as the school year.

“We had a stellar group this year for the slow-pitch season and I felt that we were going to have a great year,” said Stewart, who as a standout shortstop for Lexington when the Lady ‘Dawgs won the 2008 State title with a 9-4 victory over Blanchard. “I thought we had a great shot at winning state.

“It stinks for those seniors because they won’t be able to get that opportunity back. We had a chance at winning State this year in slow-pitch. For that to come to an abrupt halt was a very tough thing for the seniors to take. I won State my senior year and if this would have happened back when I played, I’d have never received a State championship ring. I truly feel for all those seniors. They’ll never know what could have been. We were going to have a great season, I know.”

She was a post-player down in the paint most of her career. She was a vital cog for the team and she was a true leader as a forward.

“Coach Clark and I went at it sometimes in a friendly way,” Jenks said fondly. “Playing basketball for him was great and it was fun. He is absolutely amazing. Amanda, Lauren, and I had a great trio going and I’m really going to miss playing basketball. I loved being on the court with everybody and coach Clark made it so much fun because he loves the game of basketball.”

Jenks explained that Clark is a close friend who grew up with many members of her family.

She learned as much following the tragic death of her grandmother Sheila West last year, who died from cancer at the young age of 60 and underwent three rounds of chemotherapy before she succumbed.

“He’s mild-mannered and he actually grew up with several members of my family,” said Jenks of Clark. “When my grandma passed away last December, I was going through some photo albums and coach Clark was in so many of the family pictures. He’s a great coach and a friend to our family.”

Clark said he is indeed very close to Jenks’ family. “I know a bunch of her relatives and I was good friends with them even before I took the job at Lexington,” Clark said with a laugh. “She was a young kid then, though. I’m surprised she remembers!”

Lexington enjoyed perhaps the finest year of any basketball team in school history.

The Lady ‘Dawgs went 20-6 and ended the year at the Class 3A area tournament in Chickasha with a 48-34 loss against Hugo. It was the first time in Lex girls’ basketball history that the Lady ‘Dawgs posted 20 wins.

“She is extremely athletic,” Clark said. “She was always the one willing to do the ‘dirty work’ on the court. She was always the first one to jump on the floor after a loose ball. She was always fighting for rebounds underneath. She hustled more than I’ve seen a player hustle. She was a hard worker and she did anything you’d ask of her.”

Clark described Jenks as a true “gamer.” She averaged 10.2 points per game along with eight rebounds and 2.8 assists per contest as a senior leader.

“She made some big plays but it’s the little things she did on the court for us that made her a great player,” Clark said. “She was a gamer and she might not have had 20 points every game but she was a heck of a rebounder. If there was a “50-50” ball loose, she was going to get it over anybody else.”

“We had a great year,” Clark said. “That was a great group that we had. All of the seniors made great contributions and they helped us win 20 games. They set a foundation that we can go build upon in the future. I know they set good examples for the younger kids in our program who got to see good basketball played at Lexington. Emilee was leading the way. She always gave 110-percent.”

Like all high school seniors in Oklahoma, Jenks was very disappointed about her year coming to an abrupt close because of Coronavirus.

“We had just started our season in slow-pitch when the virus shut us down,” Jenks said. “I didn’t realize that it was such a big deal and how much it would affect everybody. I hated that I wasn’t able to finish the slow-pitch season and my senior year. It shut down everybody’s daily life.

“It was traumatic and I wasn’t expecting it. It was tough to handle and it seemed like it came out of nowhere. It was weird not to go to school and be with your friends and seeing your teachers – doing what you always do. But, we’ll get through this somehow and things will get better.”