Runners-Up and third for Wayne

The Wayne Bulldogs, coached by Jackson Embry, were runners up in the Graham-Dustin tournament over the weekend. They had wins over Macomb and Porum but lost to Maud in the championship game, 60-54. 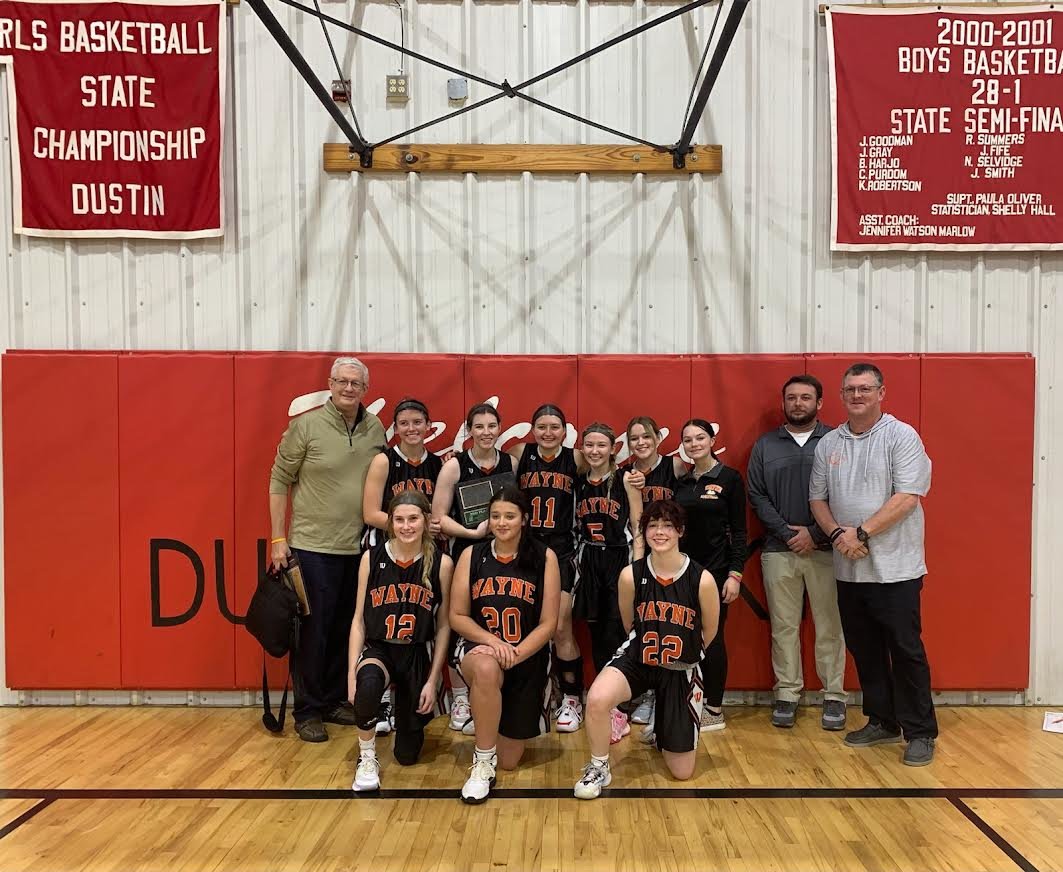 The Lady Bulldogs, coached by Bill Burnett, notched a 58-43 win over Maud to finish in third place in the Graham-Dustin tournament over the weekend. Senior Kaylee Madden and junior Jordynn Debaets were named to the All-Tournament team.
Previous Next
Posted Thursday, January 12, 2023 9:00 am
Emily Montgomery

Kaleb Madden and Jaxon Dill were named to the All-Tournament team for the boys bracket.

Kaylee Madden and Jordynn Debaets were named to the All-Tournament team for the girls bracket.

“We were the one seed and the guys were excited to go out there and show that they deserved it. We played well,” head coach Jackson Embry said.

In their first game, the Bulldogs shellacked Macomb, 64-24. They tallied 52 rebounds in the win.

Wyatt Webster led the team with 21 points. Madden and Ty Kemp were in double digits with 14 and 10, respectively.

“We started slow but then picked it up in the second quarter. Once we got things going, we played well,” Embry said.

Macomb held a slight, 8-4 lead through one quarter of play. But, 26 points for Wayne in the second helped to build their commanding lead that would carry them to victory.

“Wyatt finished the game with 15 rebounds and he realized in this game just how effective he could be.”

Next, Wayne was matched up with Porum. And, once again, Wayne handily beat the Panthers, 60-44, thanks to 28 points from Madden and 18 from Dill.

In the championship game, Wayne faced Maud, a tough team with a 10-2 record.

“They’re a tough team. Giving up offensive rebounds is what killed us.

Despite outscoring Maud in the third, the Tigers’ nets heated up as they poured in 22 fourth quarter points to pull away for good.

Madden and Dill were in double digits with 17 and 16 points.

In total, Madden had 59 points through all three tournament games. Dill had 43.

Madden eclipsed the 1,000 point mark in Wayne’s loss to Maud.

Monday night, Wayne hosted the Oklahoma School for the Deaf and got a 53-33 win.

“We played well and the game allowed for a lot of our reserves to get more playing time,” Embry said.

Wayne held a 25 point lead at the half and despite a fourth quarter run from OSD, the Bulldogs picked up the 20-point win.

The Bulldogs jumped out in front from the first quarter and never looked back, outscoring the Knights in the first three quarters.

Madden had 27 points while Dill added 20 in the win.

The Bulldogs (8-6) are set to host Stratford on Friday night.

The Wayne Lady Bulldogs started the Graham-Dustin tournament with a 52-36 win over Schulter.

The Bulldogs were down 8-3 after the first quarter but came back to outscore Schulter in the final three stanzas.

Next up the Lady Bulldogs ran into Sasakwa and lost 59-27.

“Sasakwa hit everything they put up. We played well, even in the loss,” head coach Bill Burnett said.

Once again, Madden was the high scorer for Wayne. She had 15 points in the loss.

In their final game of the tournament, Wayne got a 58-43 win over Maud to take third place.

“Saturday’s win was a good one. We stayed after them. We got a lot of easy looks and buckets in transition,” Burnett said.

In the win over Maud for third place, Madden had a triple-double. She finished with 35 points, 10 rebounds and 10 steals.

“Kaylee had an outstanding tournament. And, Jordynn got key buckets when we needed them.

“Faith had a good tournament too. She does a good job on the inside and on the boards,” Burnett said.

Monday night, Wayne picked up a 55-23 win over Oklahoma School for the Deaf.

Three Lady Bulldgs were in double figures. Madden had 23, Madi Sharp added 15 and Keeler had 12.

Last Tuesday, Wayne just fell short in a 33-31 loss to the OKC Knights.

Despite 13 apiece from Madden and Debaets, Wayne couldn’t pull out the win.

The Wayne Lady Bulldogs (8-6) will be back on the court Friday night hosting 2A #15 Stratford.

“We’ll have to bring our A game and get after it,” Burnett said.