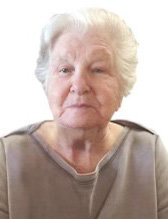 Rita Mae Bennett Benn Liberty, 83, died of Lewy Body Dementia on May 25, 2022. She died quietly at her home with her family.

She was born on November 22, 1938 in Arnoldview, Oklahoma. She was the youngest daughter of George and Era (Fowler) Bennett. Rita graduated from Wayne High School class of 1956.

In October of  1956, she married Donald Keith Benn of Dibble Oklahoma. They settled in Blythe, California, in the mid-1960s, opened a successful radiator shop and raised four daughters. In 1980 she moved back to Purcell to help with her parents and be closer to family.

She worked at the prison and then became a home health care worker until she retired in 2012. She loved helping people and loved her career in Home Health. Rita loved her family and she loved her Lord. She looked forward to when she would be able to meet Him face to face in heaven and spend time with family already there. She would want everyone to know for sure they will see her again one day. John 3:16, Romans 5:8, Romans 10:9.

She is survived by her younger brother, Qunin Bennett; three daughters, Anita Miller of McAllen Texas, Brenda Backhaus of Orangeburg, S.C., and Cindy Holden of Norman Okla.; seven grandchildren and 11 plus great-grandchildren.