Defense comes up with key turnovers 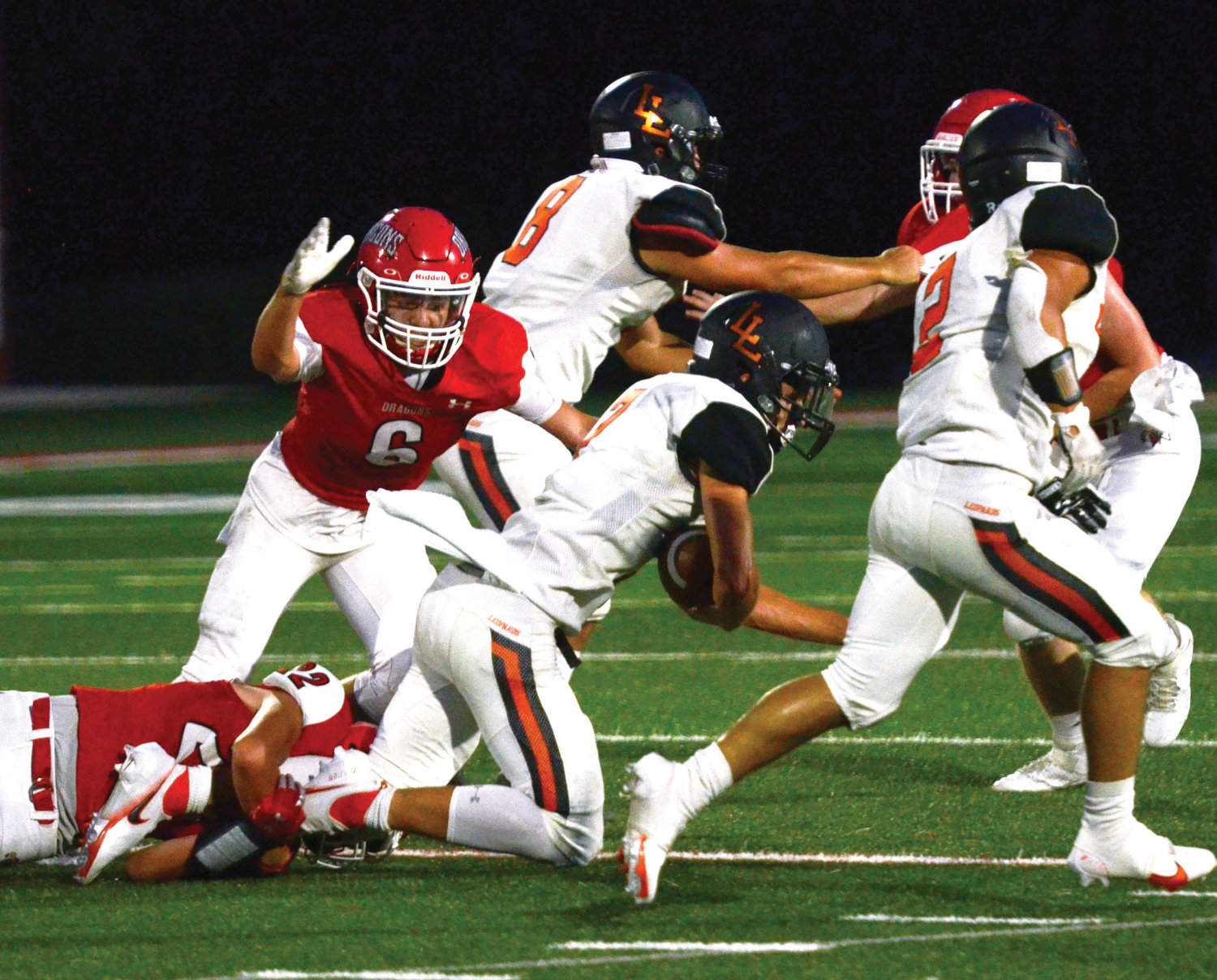 Purcell freshman Kash Guthmueller (6) goes airborn to finish off a Lindsay runner after Payson Purcell (22) grabbed his legs. The Dragons defeated the Leopards 20-14. They travel to Meeker Friday for a 7 p.m. kickoff.
John Denny Montgomery 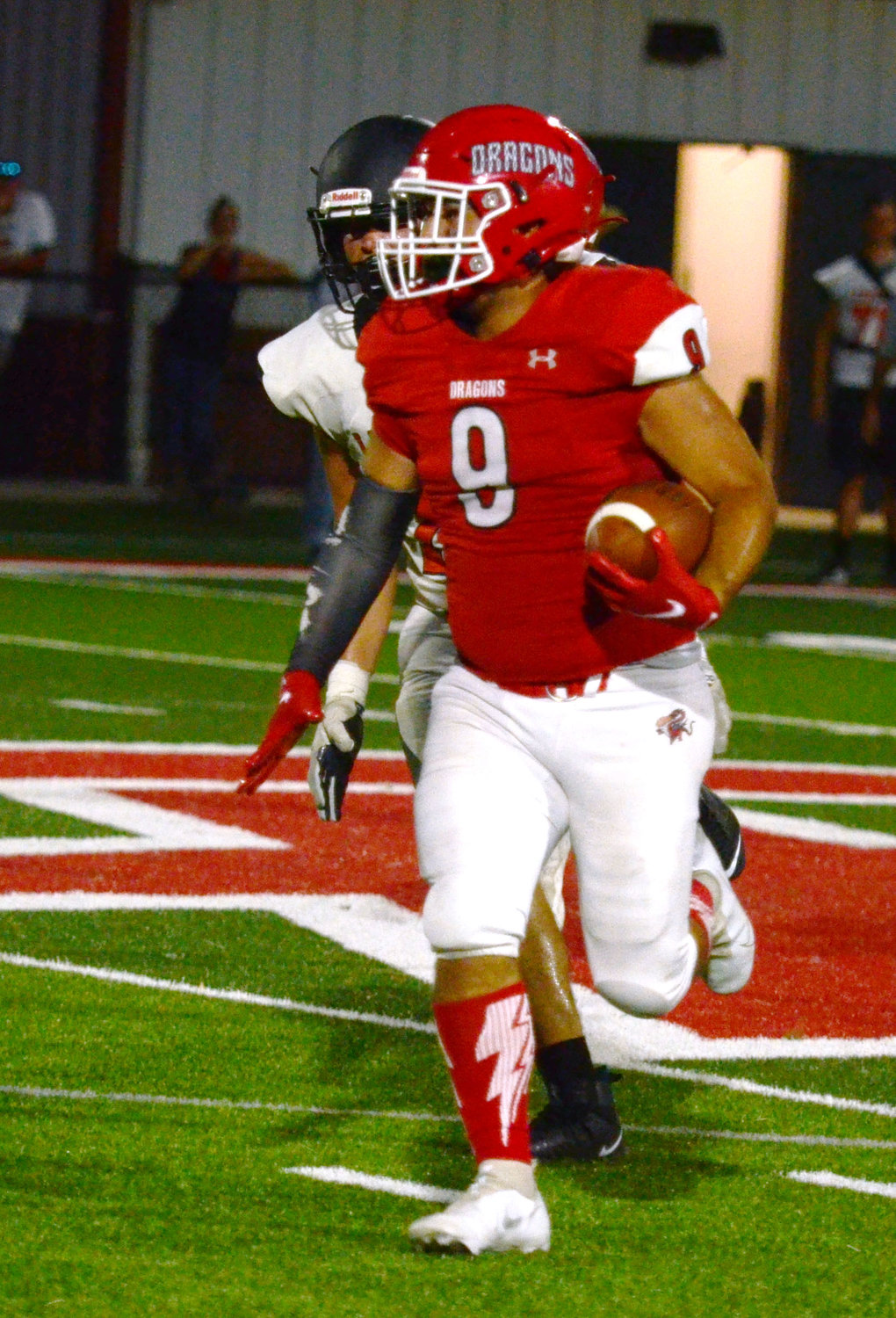 Purcell senior Brodrick Smith came up with a huge interception to set up a Dragon touchdown just before halftime during Purcell’s 20-14 win over the Leopards. Purcell plays at Meeker Friday at 7 p.m.
John Denny Montgomery
Previous Next
Posted Thursday, September 9, 2021 9:00 am
John D. Montgomery

A bad Lindsay center snap and heads up defensive play turned the tide on the visiting Leopards last Friday night at Conger Field in a hard-fought 20-14 Purcell victory.

Lindsay’s defense stiffened and forced Purcell to punt with 5:22 left in the game.

The Leopards had driven to the Purcell three yard line with just over a minute left looking like they were either going to tie up the score or go up by a point.

But the low snap caused the Leopards to lose 17 yards. A desperation pass fell harmlessly to the turf and Purcell had leveled its season record to 1-1.

Creed Smith carried the offense, rushing 12 times for 116 yards and two touchdowns. He was 8-13 passing for 86 yards and one touchdown.

Smith scored on runs of one yard and 29 yards and he hit Titus Mason on a 34 yard touchdown strike, accounting for all three Dragon scores.

Mason finished the night with four catches for 47 yards and the six pointer.

Head coach Tracy Scott said Smith and Titus both played well on both sides of the ball.

“Creed had a heck of a game,” Scott said. “Both he and Titus played very well. And, I thought the defense as a whole did a good job.

“The defense played well in the first half and then played pretty good in the second. Lindsay made a stand when they had to. I thought our young guys grew up a lot from the first game and improved a bunch. But we still have a long ways to go.”

Scott had words of praise for Brodrick Smith, Payson Purcell and Kash Guthmueller for their play on the defensive side of the ball.

“We played better up front,” Scott said. “I thought Austin Burton played well at corner. We tried to keep people fresh so we started Brody Holder at defensive end and Tavian Engert in the defensive line.

“Brendan Bacon played both ways most of the night and did a good job,” the coach said. “He spent a lot of time on the field.”

Up next for the Dragons is 1-1 Meeker. Kickoff Friday night is slated for 7 p.m.

Meeker will line up in a 4-2 on defense and are multiple on offense.

“They are more of a one back offense but last week they lined up in some two back sets,” Scott said.

“Their quarterback is a really good athlete,” Scott noted. “We’ll have to keep him in the pocket. Overall, we’ll have to play well and not turn the ball over. I think we match up with them pretty well.”

Purcell Head Coach Tracy Scott nominated Creed Smith as the Offensive Player of the Week. Smith rushed the pigskin 12 times for 116 yards and two touchdowns and was 8-13 passing for 86 yards and a touchdown.

Nominated as the Offensive Lineman of the Week was Carter Goldston, who graded out at 70 percent against Lindsay.

Getting the nod in the Defensive line was Brody Holder who made 7 tackles.

Nominated as the Defensive Player of the Week was Jose Ochoa. He had nine tackles, one quarterback hurry that caused an interception, made an interception and broke up a pass.