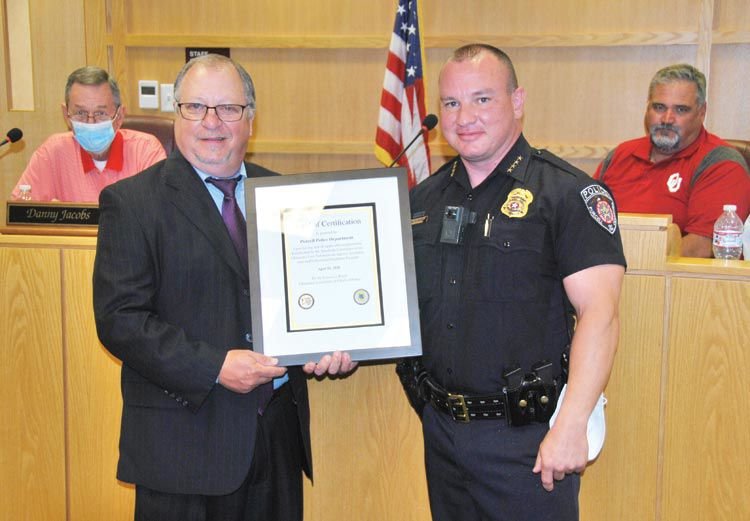 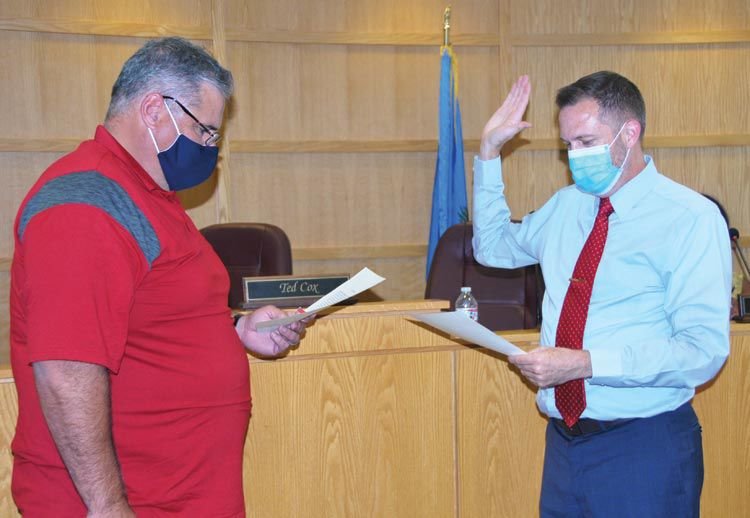 Mayor Ted Cox officially swore in Graham Fishburn for another term on the Purcell City Council Monday night at the Community Room of the Police Service Building. 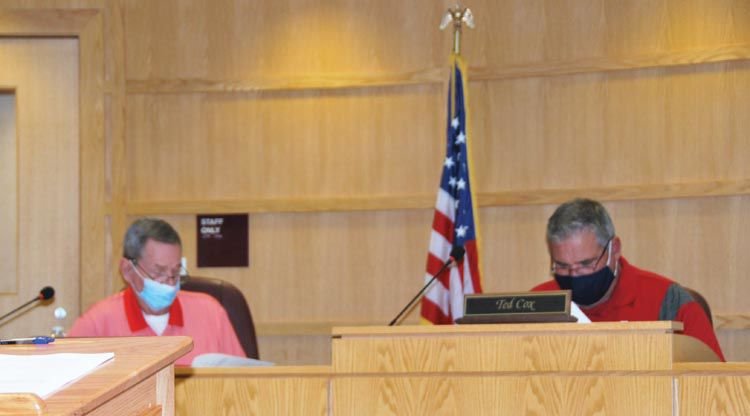 Danny Jacobs, left, and Ted Cox were re-elected by the Purcell City Council Monday night as the Vice Mayor and Mayor to serve another term in those capacities.

Graham Fishburn was sworn in for another term and Ted Cox was elected to another term as Mayor but it was the Purcell Police Department that stole the show at Monday night’s regular city council meeting.

A project that now Purcell Police Chief Bobby Elmore started back in 1998 has come to fruition.

Purcell’s Police Department now joins just 21 other police departments across the state to be an Oklahoma Law Enforcement Accredited Program.

Kevin McCullough, a Law Enforcement Specialist with the Oklahoma Municipal Assurance  Group (OMAG) presented Elmore and the department with Accreditation and Certification from OMAG.

“This is unique and special,” McCullough said. “Purcell has become one of the best in Oklahoma. We look at the policy manual. We look at procedures and compare them to the state’s and national’s best practices.

“Your department exceeded the best in Oklahoma,” McCullough continued.

“It takes an entire agency to accomplish this,” Elmore said.

The chief gave credit to Accreditation Manager  Cpl. Josh Van Ort for putting the finishing touches on the report and project.

Fishburn commended the department, that has 20 full time officers.

“I applaud you to have an outside agency come in and have the reassurance from experts we are doing things correctly,” Fishburn said.

Another gesture of good will from the Purcell Department came from Officer Brooke Gaines.

Danny Jacobs, who was re-elected to another term as Vice Mayor at the meeting in the Police Service Building, singled out an act that Gaines recently did.

Jacobs told a story about a senior couple from Ada who had been to a doctor’s appointment in Oklahoma City. On their way back to Ada they got hungry and pulled into McDonald’s in Purcell.

Gaines was also in line and paid for the order the couple had placed.

“And the reason I know this story is because the man taught me chemistry and he told me the story,” Jacobs said during the meeting. “Officer Gaines went above and beyond service above self.”

After an executive session the council approved collective bargaining agreements with the FOP and IAFF for the fiscal year 2020-2021.

City Manager Dale Bunn said the parties agreed that because of the serious unknowns, especially economic, caused by the COVID-19 coronavirus pandemic, pay rates would hold at current levels.

“This matched what the City of Purcell was doing throughout all its workforce,” Bunn said.

In other actions, the council:

In his report, Bunn said the attempts to level basketball courts have failed. He said the architect is making a formal claim to tear up the one court and replace it.

He said a planned employee lunch was cancelled due to the pandemic. The Purcell Lake Trails bathroom has been delivered and Sullivan Engineering is working on a storm sewer punch list. He told the board the hospital financing bond sales have been finalized and the cash was deposited in the bank.