Purcell goes for win in OT 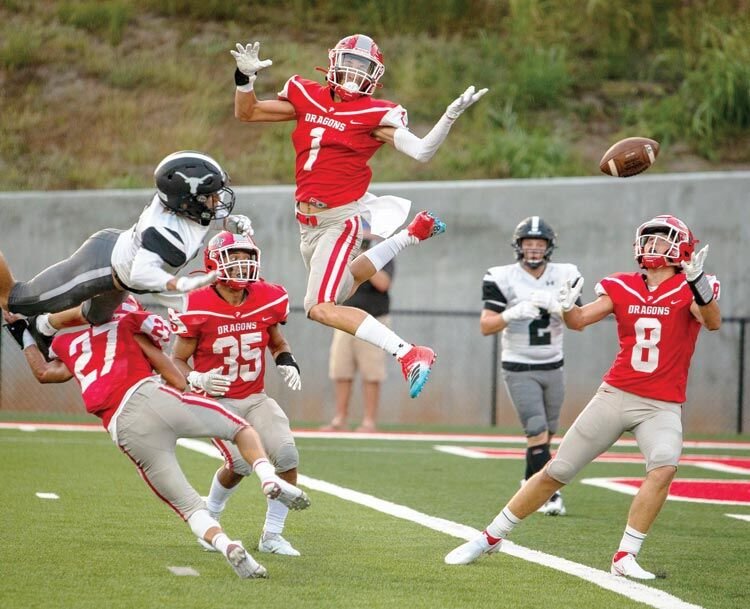 Mojo Browning (1) tips a ball to Brody Galyean (8) for an interception Friday night against Lone Grove. Dayton Smith (27) and Sam Wofford (35) also defend on the play. The Dragons lost to the Longhorns 41-40 in overtime. 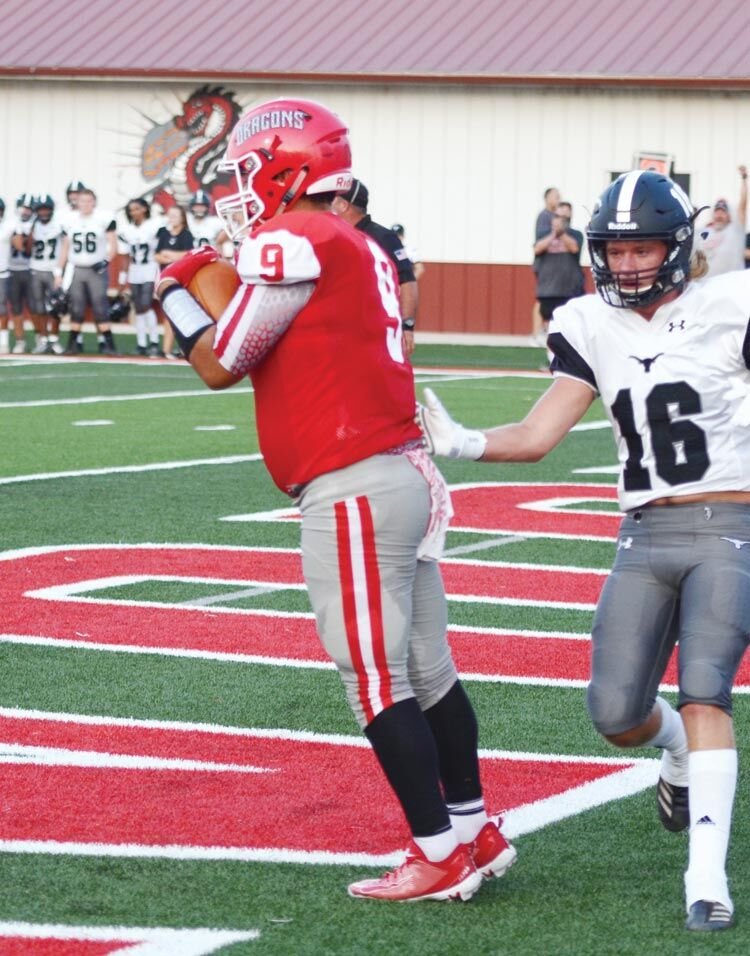 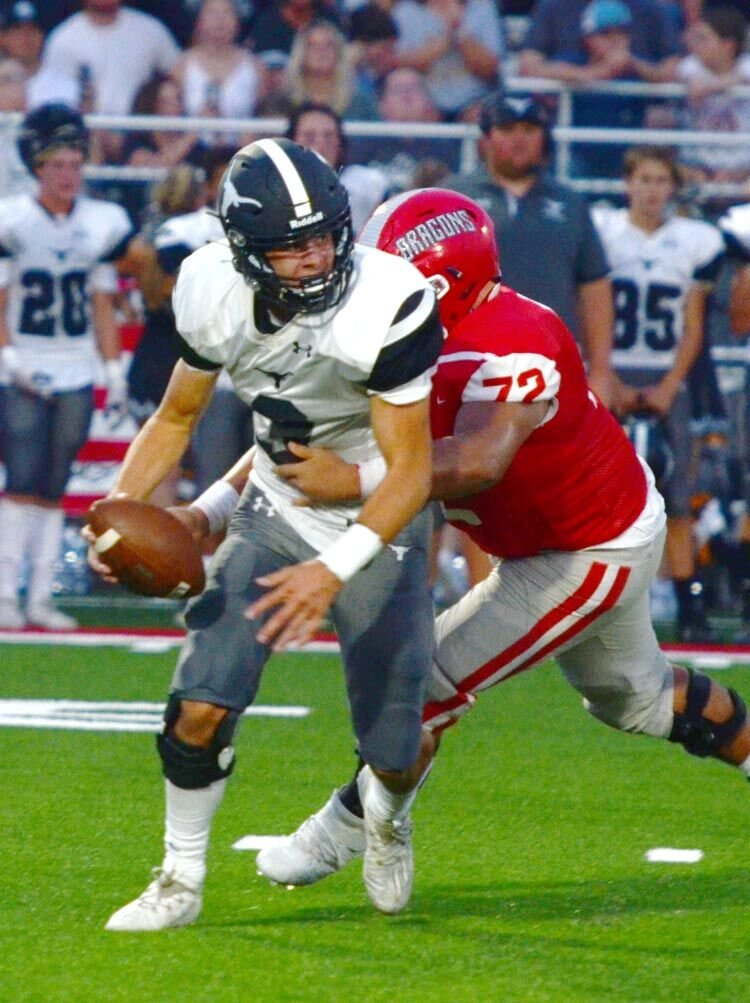 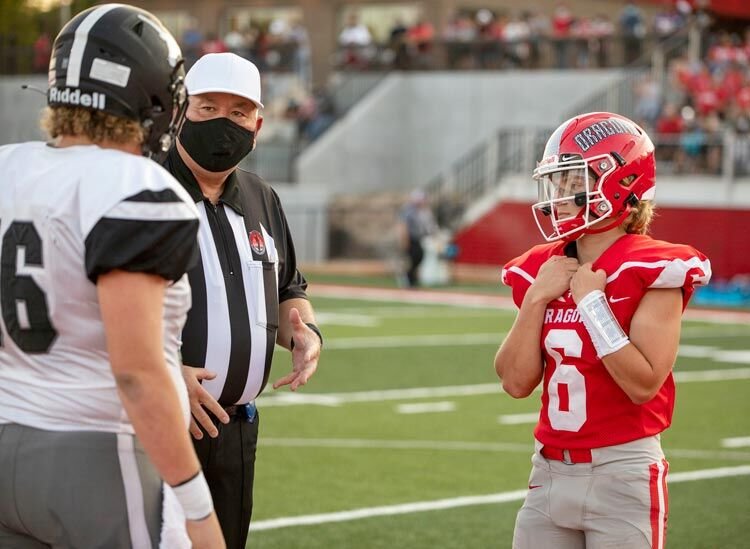 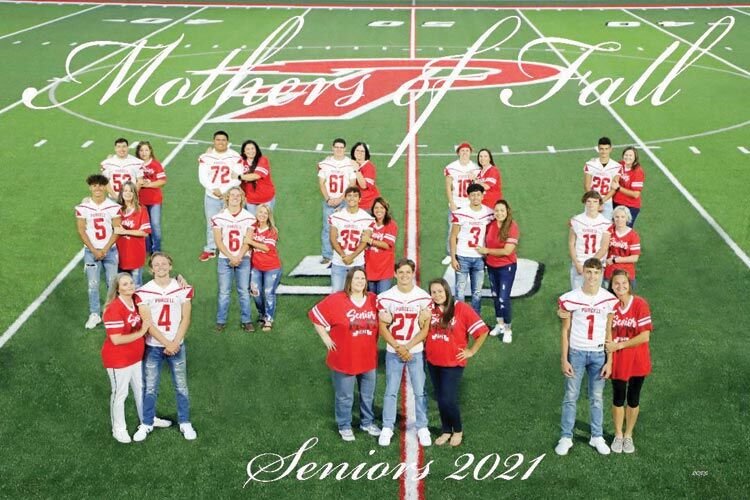 Previous Next
Posted Thursday, September 3, 2020 10:00 am
The Purcell Register

A fantastic come from behind finish to score twice with 3:25 left in regulation, forced the season opener with Lone Grove to overtime.

Purcell coaches decided to go for two after they scored in the OT and the ball slipped through the intended receiver’s fingertips handing Purcell a 41-40 loss in extra innings last Friday at Conger Field.

Senior quarterback Kody Kroth was excellent completing 39 passes in 56 attempts including four touchdowns and no interceptions. The Dragons racked up 381 yards through the air and had a total offense of 481.

Kroth spread the wealth around with 17 receivers making catches.

Titus Mason led the receiving corps with 12 catches for 103 yards and a touchdown.

Freshman Ryker Fink rushed the pigskin 14 times for 54 yards including a one yard touchdown plunge. Sam Wofford also scored on a one yard run.

Head coach Tracy Scott was extremely pleased with the effort and the never-say-die mentality of his club.

“We certainly can’t fault their efforts and the never-give-up mentality,” he said. “We were down two scores with 3:25 to play and forced overtime.

“We had plenty of chances to give up the ghost which is a credit to them. Lone Grove had five offensive linemen that didn’t play a snap on defense. We had several players going both ways and fatigue was a factor.

“That’s why we decided to go for two. We thought we had a good play called. The ball just went through our fingertips,” the coach said. “It could have gone either way.”

Scott said there were numerous players that turned in top performances in the game.

“Up front on offense we did a good job especially Johnny Marquez, Gage Askew and Jaysen Shea,” he said.

The running back by committee rushed for just under 100 yards, led by Fink with 54.

“Pretty good for a freshman,” the coach said. “Payson Purcell did a good job. Sam did play some offense but he has to be in there every play on defense so we’re going to rest him on the offensive side.”

“He came in there in his first start and had 13 tackles. He was all over the field,” Scott said. “He also did a good job on offense, too.”

The defensive forward wall of Marquez, Shea and Askew did a good job when they weren’t cramping, the coach said.

Scott pointed the play of freshman Tavian Engert and also the work of Mateo Ramirez.

“And as the game progressed Brodrick Smith played better. Sam is always steady and a good player. Titus Mason had a really good game at cornerback and sophomore Brody Galyean gave up one long pass but got better as the game went on.

“Creed Smith played well at outside linebacker. He has to do some growing up but I think we can get there,” Scott said.

The Leopards run a 3-4 defense just like the Dragons and have a very similar offense.

“I feel good about our team,” Scott said. “They bust their butts. We’ve just got to get ‘em rolling and be ready for Friday,” he concluded.

Purcell Head Coach Tracy Scott nominated Kody Kroth as the Offensive Player of the Week. Kroth was 39-56 passing for 381 yards and four touchdowns with no interceptions.

Dayton Smith got the nod as the Defensive Player of the Week for his 13 tackle performance against the Longhorns.

Jaysen Shea is the nominee for Offensive Lineman of the Week. He graded out at 88 percent against Lone Grove.

Scott nominated Johnny Marquez as the Defensive Lineman of the Week. He made 10 tackles against Lone Grove.