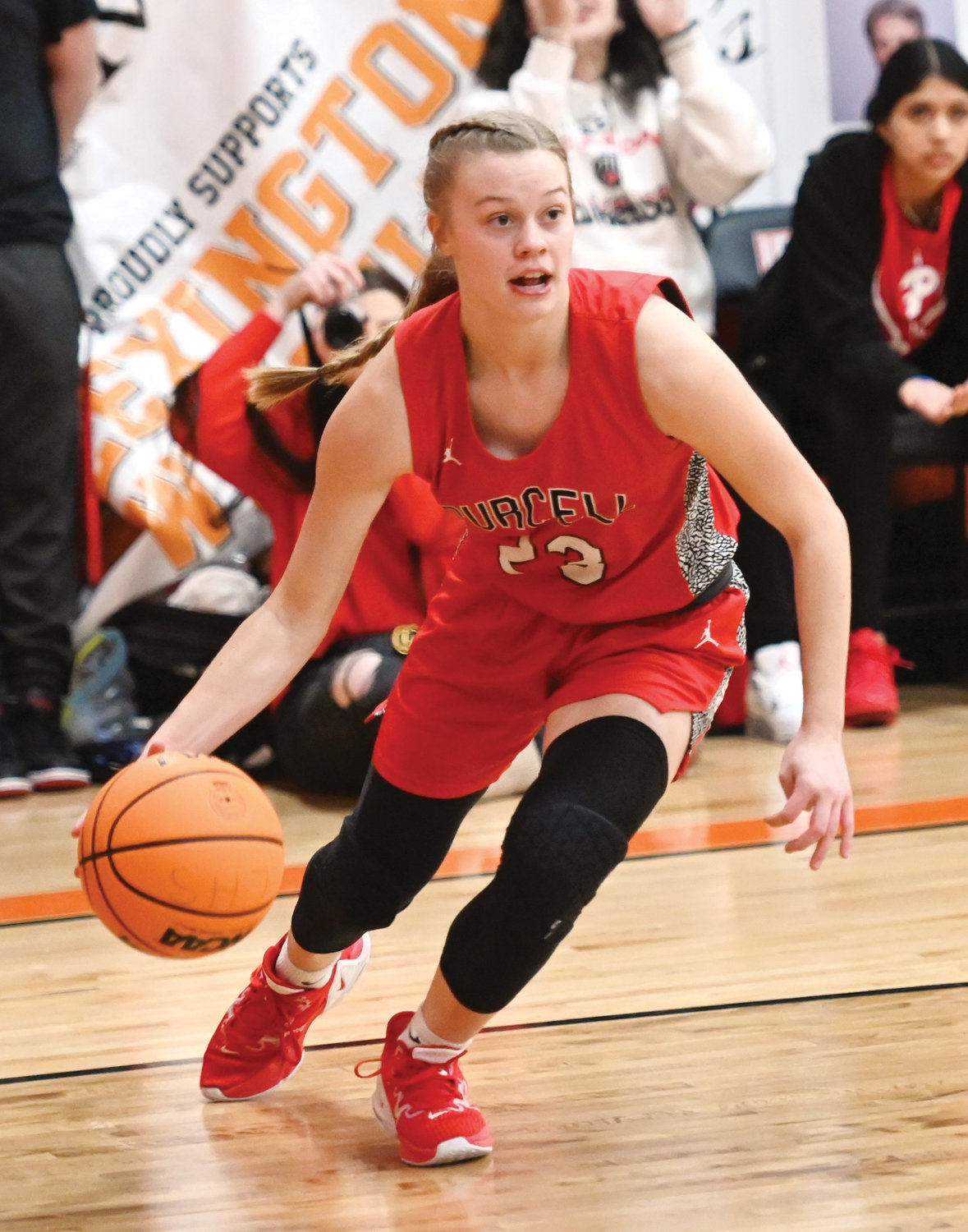 Hadleigh Harp gets low as she cuts to the basket in Purcell’s 61-40 win over Lexington last Friday night.
John Denny Montgomery 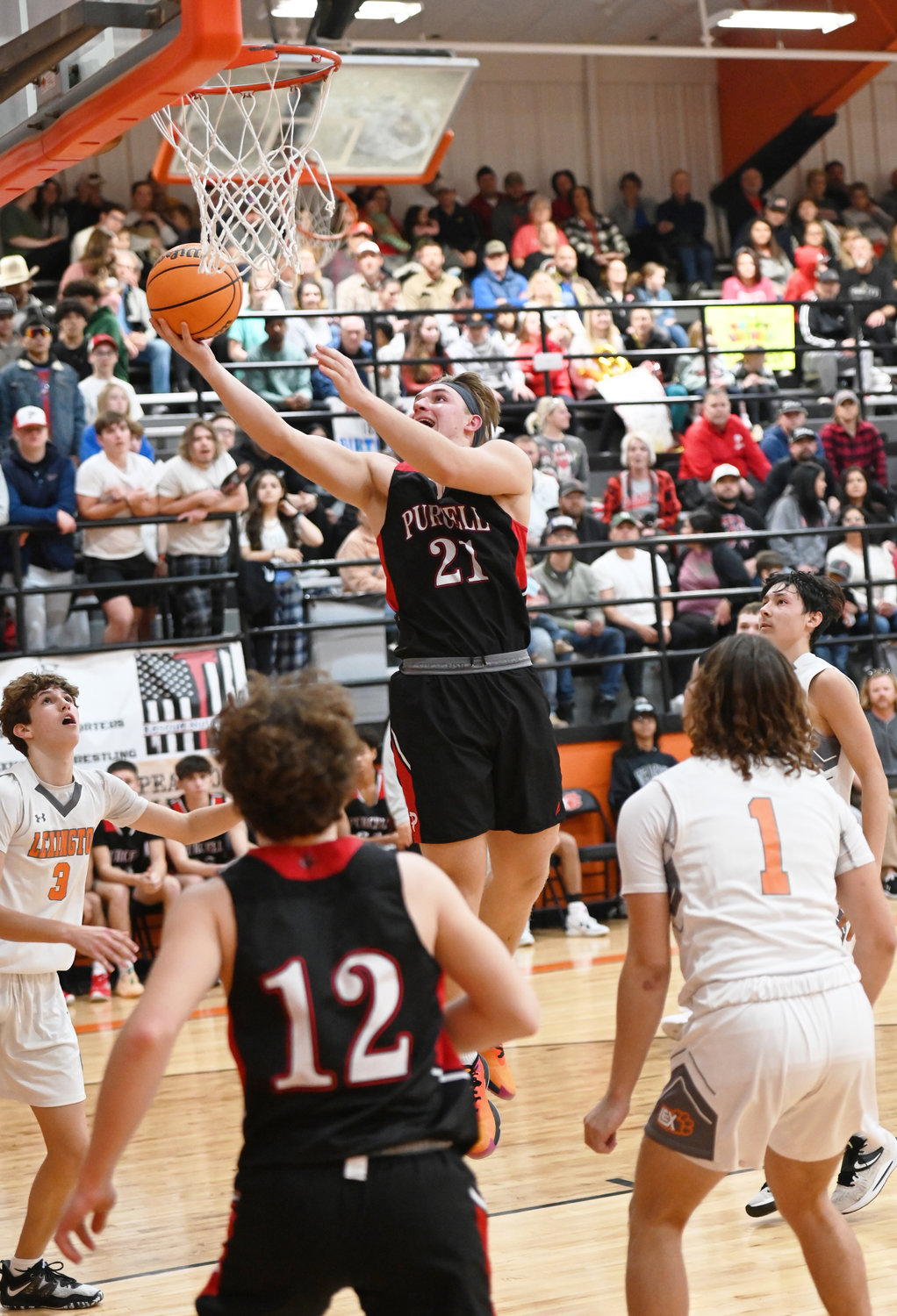 Purcell’s Hayden Ice gets up for a quick two in the Dragons’ 54-29 win over Lexington last Friday. Ice led his team with 15 points.
John Denny Montgomery
Previous Next
Posted Thursday, January 19, 2023 9:00 am
John D. Montgomery

Since their two point overtime loss to Coweta in the Verdigris tournament, Purcell’s No. 11 rated girls have ripped off back-to-back victories over Marlow and Lexington to hike their season record to 9-3 heading into Tuesday’s game at Washington.

Led by Kenna Esparza’s 13 points the Dragons popped Marlow on the road last week 52-35. The feisty Dragon defense limited Marlow to single digits in three out of the four quarters and had eight players figure into the scoring.

Purcell led 25-14 at the halftime break and out-scored the Lady Outlaws 27-21 in the final two frames.

That was an important game for our team as we continue chasing a conference title,” head coach Toney Cooper said.

“Defensively we were locked in from the opening tip,” he continued. “Led by Lauren Holmes, we keyed in on Marlow’s Whitney Wade and held her in check for most of the game.”

“We were led by Kenna Esparza, with key contributions from KK Eck. Jenna Avery was able to get to the line quite a bit as well. Given we were swept last season by Marlow, our team was determined to get this win. I’m proud of their efforts and proud of the results.”

Coach Roger Raper’s No. 1 ranked Dragons bounced back from a 57-39 loss at Marlow to pin a 55-29 loss on the Lexington Bulldogs on Friday the 13th.

Hayden Ice led the offense with 15 points while guard Malachi Evans finished with a baker’s dozen.

Kobe Freeman was the high point Dragon in the Marlow loss with 13 while Evans and Ice both finished in double figures with 10 apiece.

“Marlow played outstandingly and we did not play very well,” Raper said not mincing any words.

“Since I have been here at Purcell we were 12-0 against Marlow. We had won 20 consecutive conference games and just became the number one ranked team in 3A. We hope to learn from this experience and grow as a team because of that game,” the coach said.

“Our conference is very tough and every night you have to be ready to play or you could get beat. Tuesday night we were not ready. I take full responsibility for having this team ready each night and on Tuesday I didn’t have their attention,” Raper said.

“I was very proud of how we bounced back on Friday night at Lexington. We played with much better energy and effort. We went from having only 15 rebounds at Marlow to having 44 in the Lexington game,” the coach said.

Raper said rebounds are a great example of the effort a team is putting out each night.

“We still have not clicked on the offensive end as a collective group,” Raper confirmed. “We have moments, but really need to become much more consistent on that end of the court.

“Our defense is what has led us to the position we are in right now. When our offense catches up with our defense we will be a really tough team to beat,” he concluded.

Dragon notes: The Lexington win was Roger Raper’s 100th victory as head coach of the Dragons.