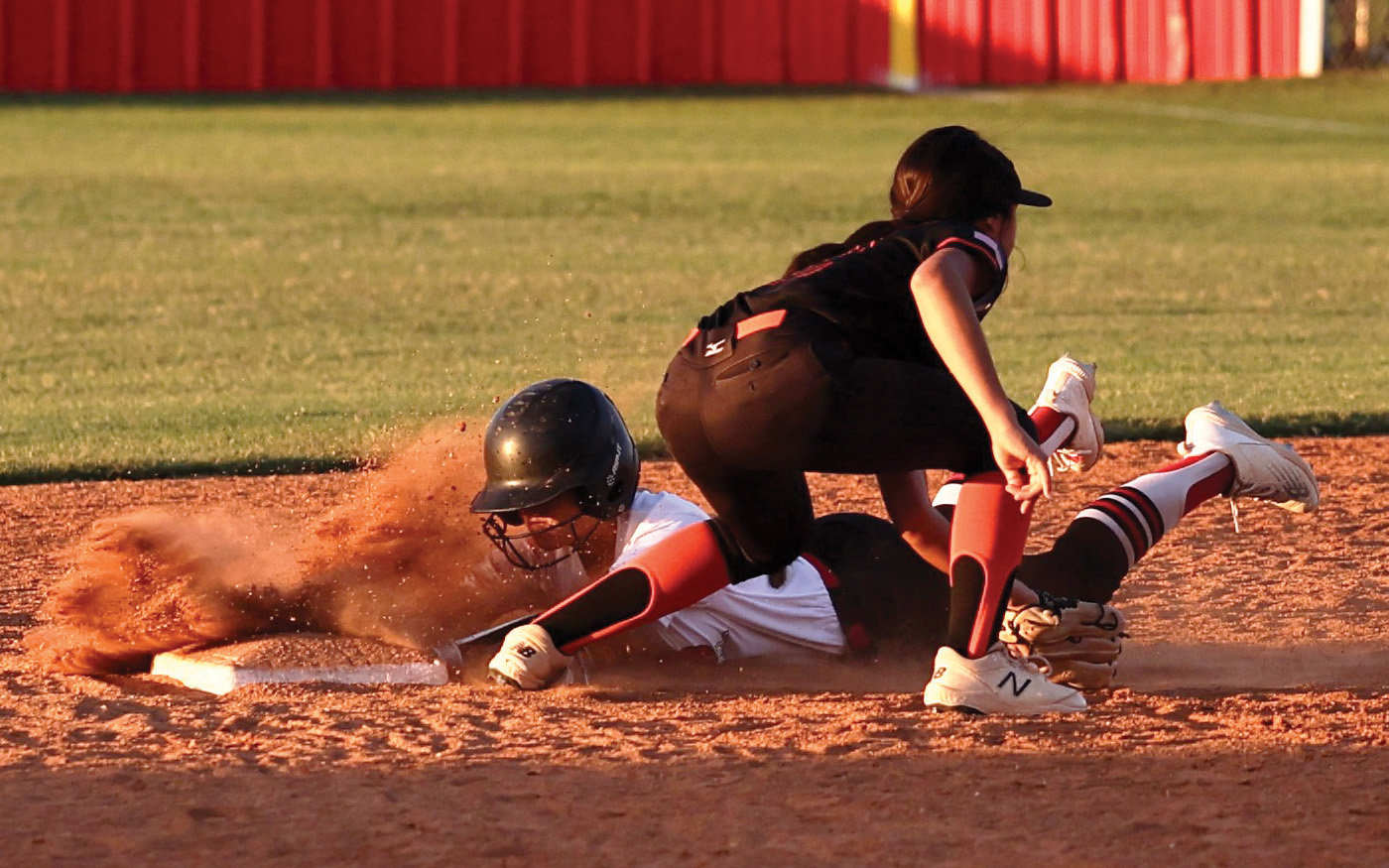 Purcell senior KK Eck beats the tag to safely slide into second base against Lexington. The Dragons fell 8-6 to the Bulldogs.
Janet Moore 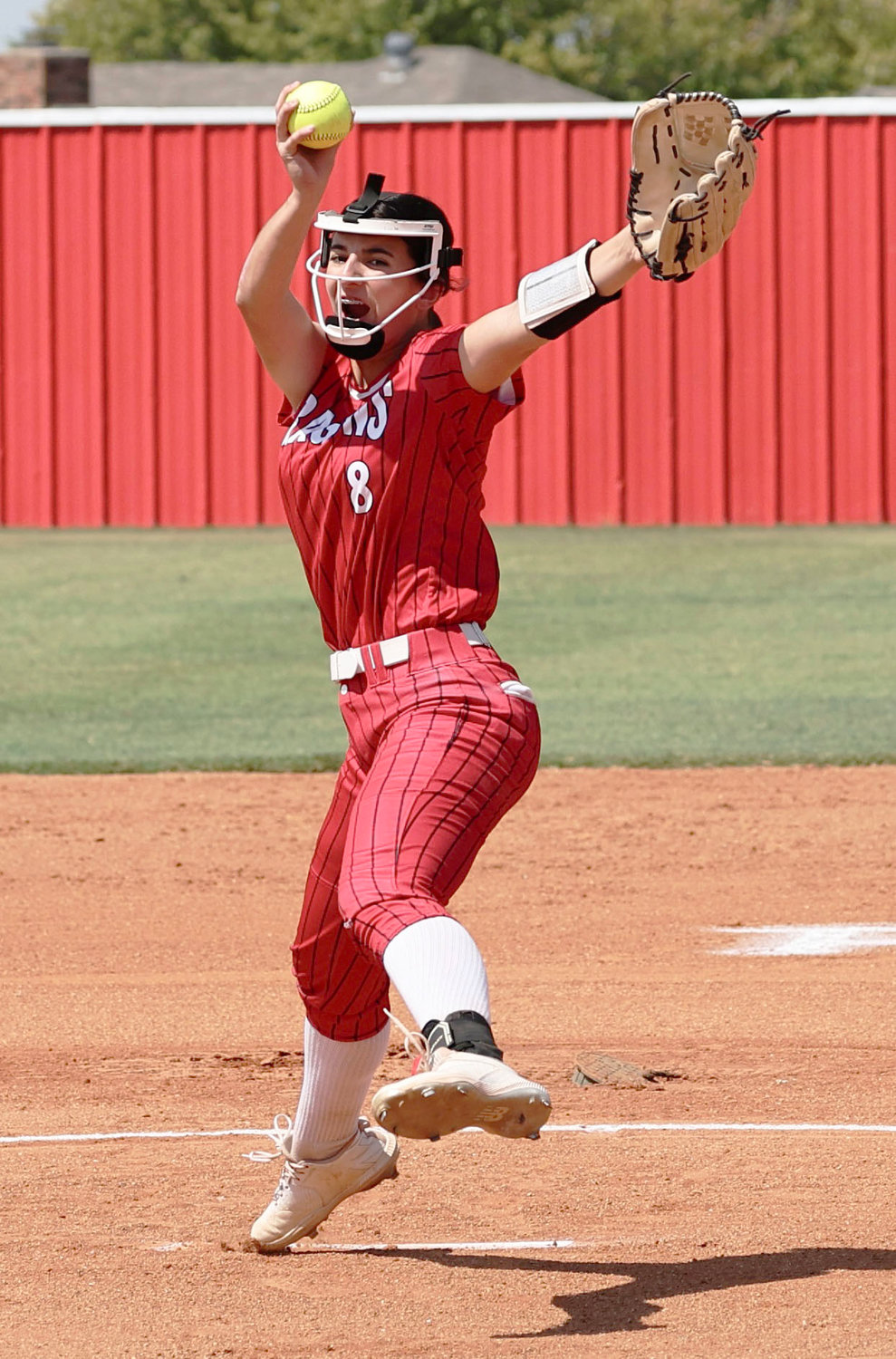 Purcell had a very busy week on the softball diamond playing eight varsity games and three junior varsity games with the varsity going 3-5.

“Then we turned around and played Lexington in a big district game on Monday.

The Bulldogs prevailed in that key contest 8-6. Lexington scored four runs in the top of the seventh and then held the Dragons scoreless in the bottom half of the frame.

Freshman Lili Del Toro was the big stick for Purcell going 3-4 with a pair of RBIs.

“That game could be the a determining factor in where we end up in regionals,” Jones said. “We spoke before the Lex game that no matter where we go for regionals we will have to beat someone twice.”

Depending on outcomes of Tuesday’s games the Dragons will know their destination for regionals. Jones said it could be Washington or Lindsay.

It all depended on the Little Axe vs. Lex outcome and Candler vs. Bethel Tuesday.

“Those games last Friday got the best of us because we were so tired,” Jones said.

Hadleigh Harp’s 2-2 outing at the plate led the offense.

Jones said pitcher Ella Resendiz was in a great deal of pain. Del Toro came in and finished the game allowing only one hit.

In the Silo game Jones said despite their fatigue the Dragons played with a lot more energy.

“After we had a break we had a lot more energy. We had much better at bats. Hannah (Whitaker) and Lili (Del Toro) spent time in the circle and did a good job. But our defense was struggling. I was proud of the girls for keeping up the energy when I knew they were tired.”

In that game the Purcell bats were quiet with Whitaker and Carli Thomas getting the only two hits.

In a 4-1 loss to Tuttle last Thursday the Dragons hit the ball hard but once again stranded too many base runners.

“We left eight runners on base,” Jones said. “We just needed a couple of those hits to fall and it’s a different game. Tuttle had a good pitcher we needed to see. Ella had a good game in the circle striking out seven and allowing one earned run.

Purcell traveled to Little Axe September 13 and posted a 3-2 victory over the Indians. The Dragons out-hit Little Axe 8-4 but committed four errors that kept them in the game.

Whitaker started in the circle fanning six.  Resendiz came in an finished the game with five strikeouts.

“For some reason playing at Little Axe makes things a little harder for us. When we play them at home it is a completely different tempo. Playing there we aren’t ourselves but we got the W.”

“It was a good day because a lot of girls got a lot of playing time,” Jones said.

Anika Raper went 2-2 at the plate and had an RBI. Savanna Edwards, Harp, Helton, Carli Thomas, Payci Constant and Kenna Esparza all had hits.

Jones said Edwards, Helton and Del Toro combined to strike out 14 in the circle.

Purcell is scheduled to play at Blanchard today (Thursday) and then begin the playoffs Saturday. They have one more regular season game at Lone Grove next Monday.

Regionals begin on the 29th.