Class 4A and 5A teams at CCS 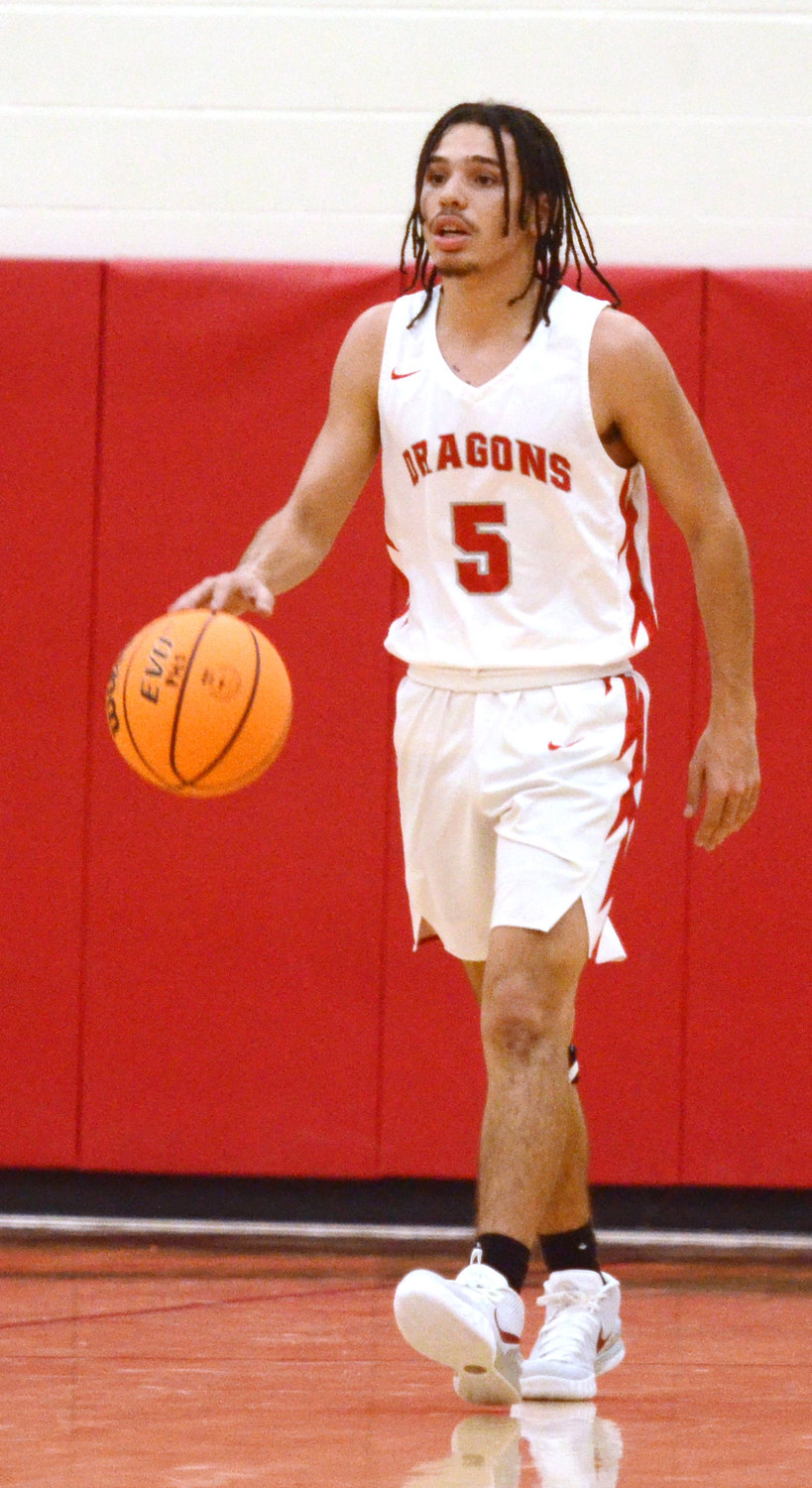 Purcell junior Malachi Evans dribbles the ball up the floor for the Dragons. Evans led Purcell with 19 points in their 69-59 win over Harding Prep last Saturday.
John Denny Montgomery 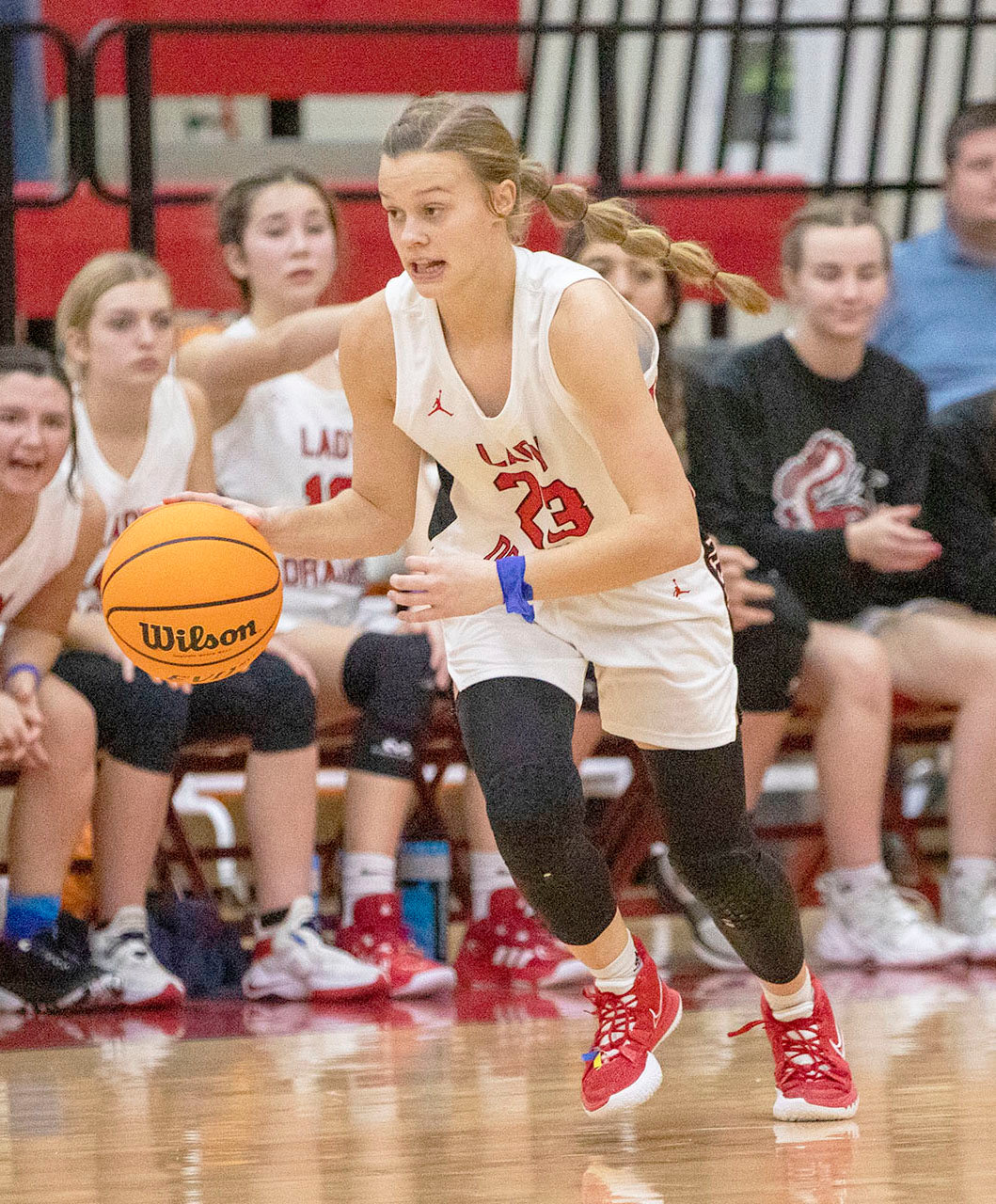 Purcell freshman Hadleigh Harp races to the other end of the floor with the ball. Harp and the Dragons are 5-1 this season.
Greg Gaston - double g images
Previous Next
Posted Thursday, December 16, 2021 9:00 am
John D. Montgomery

Both Purcell’s boys and girls ran their records to 3-0 with victories over Davis December 7.

Coach Roger Raper’s Dragons, led by a trio in double figures, knocked off the Wolves, 62-45.

Hayden Ice led the offense with 18 points. Lincoln Eubank finished with 13 points and Jorge Munoz had 11.

KK Eck led the offense with a dozen while Lauren Holmes finished with 11.

Both teams ran into some Class 4A and 5A power houses in the CCS Tournament and found the sledding tough.

Class 4A No. 9 Bethany pinned a 64-33 loss on the girls but Sikes’ troupe rebounded to post victories over Southeast and Noble.

Purcell had 12 girls score in the 74-29 shellacking of Southeast, led by Ella Resendiz with 11.

Eck led the offense with 14 points with Lauren Holmes right on her heels with 13.

“A good 4A No. 9 ranked Bethany really put it on us on Thursday. I wasn’t sure how we would respond but we rebounded from that loss very quickly.

“We put Southeast away early on Friday,” the coach said.

The Dragons shot out of the gate in the Noble game putting up 22 points in the opening period but cooled off in the second and third quarters. However, they fought back to out score the Bears, 18-10 in the final stanza.

“We started extremely fast on Saturday against 5A No. 18 ranked Noble. We had them down early then our youth showed with fouls and bad decisions and we let them crawl back in it and eventually take the lead,” Sikes said.

“But the fight and determination of my young team came out and we battled back to win. We still have a lot to work on and we are learning every game. But I’m proud of what we have accomplished so far,” he concluded.

Purcell took a 5-1 mark to Lindsay on Tuesday.

Raper’s Dragons played Class 4A No. 8 Bethany tough, eventually lost by a deuce, 42-40.

This was an extremely good tournament from top to bottom.

“We had several chances to put the game away,” Raper said. “We had to make some adjustments in our lineup and rotations and weren’t in sync down the stretch.”

In the second round the Dragons matched up with 4A No. 11 Anadarko and again played tough only to come up short, 56-45.

“We would make runs but could never get over the hump,” Raper said. “Anadarko got us at the free throw line with 24 attempts to our eight. They made 17 to our five and that seemed to be the difference in the game.”

Despite playing in foul trouble, Purcell pulled out a 10 point victory over Harding Prep on Saturday, 69-59.

Purcell finished with four players in double digits including Malachi Evans with 19, Lincoln Eubank with 16, Nate Willis with 15 and Kobe Freeman with 11.

“We were in foul trouble in game three with both Nate Willis and Hayden Ice on the bench midway through the first quarter and all through the second quarter.

“I was extremely proud of our kids fighting to stay in the game. Jett Tyler, Kobe Freeman and Brayden Tharp came off the bench and gave us some great minutes,” Raper praised of his young players.

Malachi Evans and Lincoln Eubank along with Freeman provided our offense keeping it a six point game at halftime.

We ended up with four players in double figures giving us great balance offensively,” the coach said.

“Willis and Ice came up big on both ends on the boards. We are now 4-2 and head to Lindsay on Tuesday for a return to conference play,” Raper concluded.