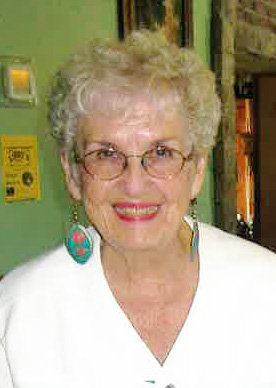 Peggy graduated from Lexington High School in 1947. She was a charter member of the Lexington High School Alumni Association and worked diligently to maintain addresses and stay in touch with fellow classmates. She went to work for Wilson Foods at 25 and retired at 62 after 37 years. She served as organizer of the Wilson retiree reunion yearly until 2017. Many of the friends she made there were like family and remained close until Peggy’s death.

Peggy was baptized at First Baptist Church in Lexington and later was a member of Northwest Baptist Church in Oklahoma City. She enjoyed traveling and catalogued her many trips around the world. She was a member of the Order of Eastern Star for over 50 years. She was a volunteer at Integris for over 1000 hours, and also volunteered at Frances Tuttle Technical Center. Peggy lived at Southern Plaza Assisted Living in Bethany her last four years, and dearly loved her friends and the staff who cared for her there. She was also very appreciative of Good Shepherd Hospice who cared for her during her last days. She was affectionately known as ‘The Queen,’ and was always feisty, outspoken, quick witted and loving to those close to her.

She was preceded in death by her parents; one brother and four sisters and spouses:Wendell Kelley and Mary, Juanita Peery and Stan, Monace Schmidt and Smitty, Fredona Lurry and Ed and one nephew Kelley Schmidt. Peggy was caretaker for her mother and two of her sisters in their later years until their passing.

Survivors include nieces who were caregivers, Mary Beth Kelley Hetrick of Edmond, Wende Lurry Jones of Nevada Mo., and Cheryl Peery McCown of Lexington. Other nephews and nieces are Wendell J Kelley of Georgia, Terry Schmidt of Texas, Joe Ed Alford of Texas, and Susan Postil of Michigan. Internment will be at Lexington Cemetery and memorial contributions may be made to First Baptist Church of Lexington, P.O. Box 507, Lexington, OK 73051.