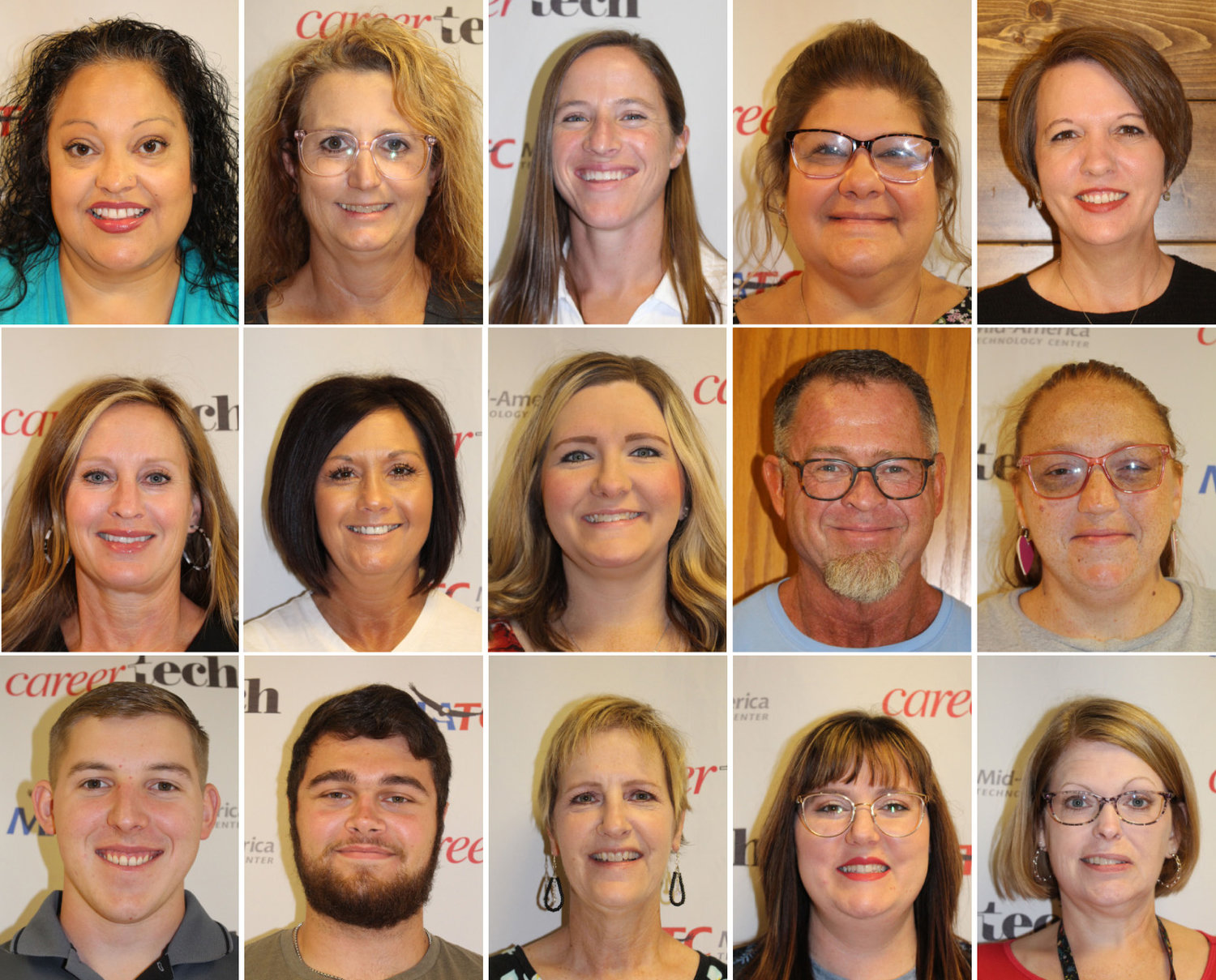 Chavez is a Practical Nurse Program instructor. She lives in Pauls Valley with her 2 sons, Rayne and James.

She graduated from Wynnewood Public Schools and the LPN program at MATC. In 2002, she attended OCCC for her RN degree. She is currently enrolled to further her education.

Chavez has more than 30 years of health care experience. In 2000 she took a job with Pauls Valley General Hospital and also worked part time at the Wynnewood Nursing Home as both an LPN and RN. When the Pauls Valley hospital closed, she worked at a hospital in Oklahoma City and at the Ambulatory Surgery Center in Ardmore.

Clagg graduated from Maysville High School. She previously worked as the cafeteria manager for Maysville Public Schools. She decided to take the position at Mid-America for a new challenge.

Cope will be the school’s new Senior IT Technician. Her parents are Bennie and Valerie Cope and she has two siblings.

She attended Ada High School and received her BS in Agribusiness from Oklahoma State University. She is currently working on a Master’s in Educational Leadership from East Central University.

Couch is the director of Practical Nursing. She has two children – Olivia and Isaiah.

She was previously a PN instructor at Mid-America for 12 years, starting her teaching career in 2010. She also worked for a pediatrics practice, Pauls Valley General Hospital and Norman Regional.

Dawley is the Student Accounting Coordinator. Her husband is David Dawley, and her children are Jonathon,  Cheyenne, Sara and Josiah.

She graduated from Noble High School and Mid-America Christian University where she obtained a bachelor’s degree.

Eubank will be the school’s new Special Services Coordinator. Her husband is MATC Superintendent Mike Eubank. She has a daughter, McKenna Gilley, and two sons, Keller and Lincoln Eubank.

Hamilton will be a teacher’s aide and bus driver. She is married to Mike Hamilton and has one son, Tanner Hamilton. She graduated from Wynnewood High School and is licensed in cosmetology.

Klein works in Business and Industry as a Customer Service secretary. Her husband is Jerrod Klein, and she has three daughters, Kayden, Kelsey and Karsyn.

She graduated from Purcell High School in 2005 and received an Associate’s degree from  Oklahoma City Community College. She is currently attending the University of Central Oklahoma where she is working on her bachelor’s in Workforce Development.

Lefler will be a teacher’s assistant. His wife is Julie Lefler, and he has two daughters, Kate and Lizzy.

He graduated from Bartlesville College High School. He previously worked as an area manager for Pizza Hut and was an auto body adjunct instructor at Mid-America for five years.

Lewis will be in housekeeping. Her mom is Jana Grigsby, and she has two sons, Kevin and Heath.

She graduated from West Monroe High School. Previously, she owned a small business and worked at Eternal Blessings, in Louisiana, transporting elderly individuals to appointments.

McDoulett will be the CNC Machinist teacher. His wife is Morgan McDoulett. He graduated from Tuttle High School and Canadian Valley Technology Center, where he received his education in machining.

Miller will be in Maintenance. His wife is Mackynzie Miller. He graduated from Purcell High School.

His previous work experience includes Purcell Public Schools and Ace Hardware. He took the position at Mid-America for a “great opportunity for career growth and self-improvement.”

Pruitt will be the Veterinary Assistant teacher. She is married to Mike Pruitt and has a daughter and son.

She attended Gotebo High School and Oklahoma State University where she received her bachelor’s in animal science. She previously worked in a veterinary clinic for 22 years and was a teacher’s assistant for the equine program at Mid-America.

Raney will teach Pre-Nursing. She is married and has two children. She graduated from Lexington High school in 2008 and from Mid-America Technology Center’s PN Program in 2009, obtaining her LPN license. She achieved her RN associate degree at OSU in 2018.

Thompson will be teaching Biology II and Anatomy and Physiology. She is married with two children.

She attended Westmoore High School and received her bachelor’s degree from the University of Central Oklahoma.

Previously, she taught English in Sanger, TX; English and Literature at Belle Isle Enterprise Middle School in Oklahoma City and science at Whitebead Schools for 19 years.