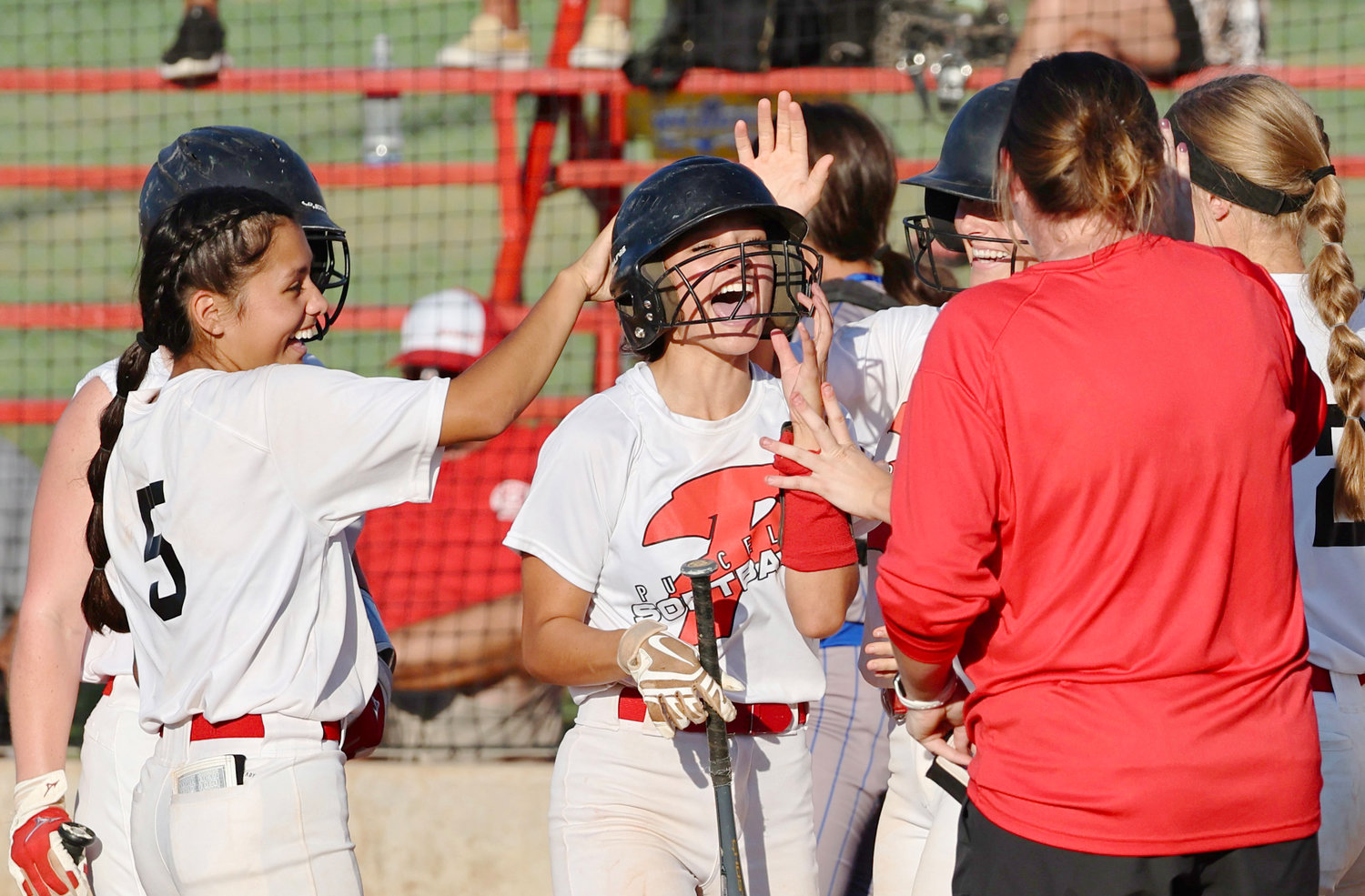 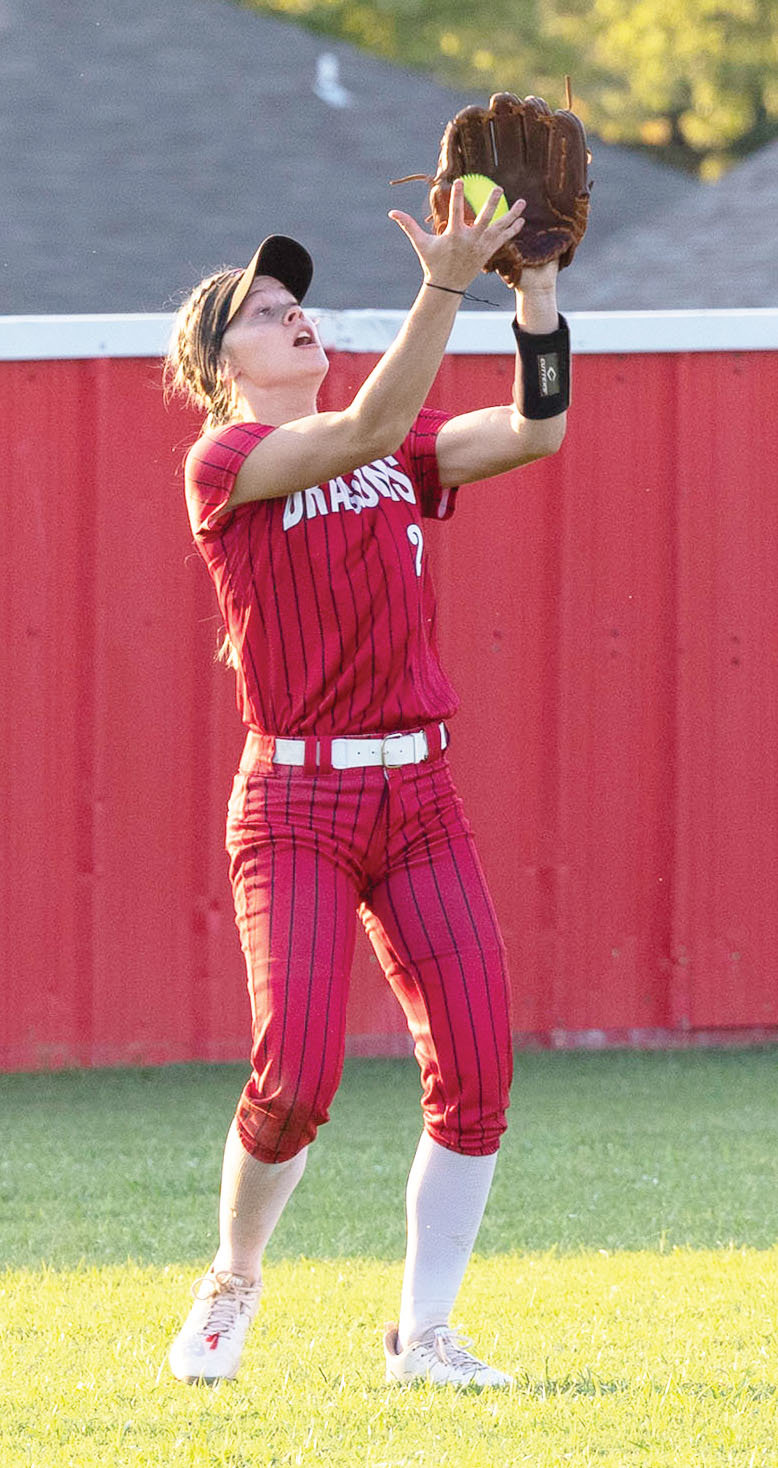 Purcell sophomore Hadleigh Harp makes a catch in the outfield for an out for the Dragons. Purcell defeated Bethel 8-0 Monday in a key District showdown.
Greg Gaston - double g images
Previous Next
Posted Thursday, September 15, 2022 9:00 am
John D. Montgomery

Purcell won three out of four softball games last week on the diamond.

The Dragons knocked off Chandler, Cache and Bethel while dropping a 4-1 decision at the hands of Chickasha.

The Dragons picked up a district victory with their 3-1 win over Chandler.

“This was a good win,” head coach Sarah Jones said. “They beat us the first time we played them. We were a little shaky on defense but made up for it at the plate.

“We did a good job of making things happen and causing them to make errors,” the coach said.

Ella Resendiz and Hannah Whitaker both went 2-3 and Savanna Edwards smashed a triple in the game.

Purcell struck first in the bottom of the fourth when Hadleigh Harp was hit by a pitch. She stole second and went to third on a passed ball.

The Dragons added a pair of runs in the sixth after a leadoff triple by Edwards. Whitaker’s single to right field scored Edwards who was knocked in by Resendiz.

“Ella had a great game with five strikeouts and no walks,” the coach said.

After losing to Cache earlier this season, the Dragons got a revenge victory, 5-1.

“They beat us earlier when we should have won,” Jones said. “I’m glad we got a second chance.”

“Our bats made up for it,” Jones said. “We had great intensity and hit up and down the lineup.”

Lauren Holmes went 3-3 while Edwards and Whitaker both had two hits. Resendiz and Constant both had hits in the game.

Both Edwards and Holmes went yard in the victory while Edwards swatted a double.

“Hannah completed the game with three strikeouts and only four hits in the circle,” Jones said.

Purcell collected another district victory in their 8-0 whitewashing of Bethel.

The Dragons out hit Bethel 12-3 hitting up and down the lineup with Edwards and Resendiz both getting three hits.

KK Eck and Whitaker both had two hits while Kailynn Helton and Constant both had hits with Payci’s a true in-the-park home run.

“Our defense was great both in the infield and outfield and Ella pitched a heck of a game.”

Resdendiz fanned four batters and limited the Wildcats to only three hits.

The lone blemish last week was a 4-1 loss to Chickasha in a game Jones said could have gone either way.

“It was a playoff atmosphere,” Jones said. “Both teams were fired up. I am beyond proud of everyone for this game. We learned a lot.”

“Their right fielder made a fantastic play on a line drive by Kailynn that would have scored Payci and Hadleigh,” Jones said.

Purcell was scheduled to play at Little Axe Tuesday in a district contest, make up a district game with Crooked Oak Wednesday starting at 1:30 p.m. and host Tuttle and Bridge Creek today (Thursday) at 4 and 7:30.

The Dragons will play in the Dale Festival Friday at 10 a.m. against Southmoore and at 1 p.m. against Silo at FireLake.

Purcell, who is 13-7,  is scheduled to host Lexington on Monday and travel to Meeker next Tuesday.