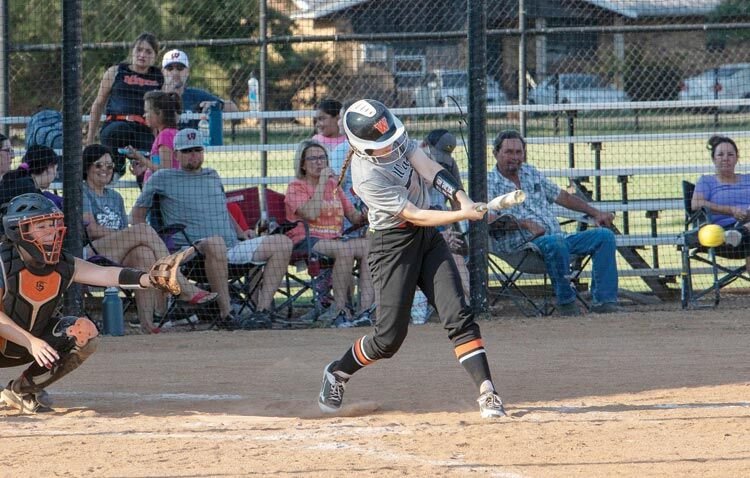 Kaylee Madden connects for a double Monday during Wayne’s 21-3 run rule win over Alex. Madden was 2-2 and scored three runs in the game.

The Wayne Lady Bulldogs kicked off a four game homestand hosting Alex in 21-3 victory over the Lady Longhorns.

“We hit the ball pretty well, pitching was good and we played good defense. They’re young and we took advantage of their mistakes,” head coach Charles Durrence said.

Going into the final inning, freshman Faith Brazell had a no-hitter. However, Alex got 3 hits to score their only runs of the game.

“This was a good win. We’ve been up and down this season.”

The Lady Bulldogs had 15 hits in the win. Junior Haiden Parker had three while Kaylee Madden, Daliyah Fuentes, Kamryn Moss, Shyleigh Mantooth and Brazell had two each.

Fuentes and Brazell also had four ribbies a piece.

Wayne kicked off the tournament with a 6-1 win over Okarche last Thursday.

“We came out and got behind, but battled back by putting pressure on them,” Durrence said.

Brazell and Parker each went 2-4 at the plate.

Parker was also in the circle for the Lady Bulldogs. She pitched six innings and allowed just one earned run and fanned six batters.

Game two of the tournament was an 11-1 loss to Apache.

“We played back to back games and I think fatigue set in for us some,” Durrence said.

Apache had 11 runs in the win, but only two of them were earned, according to the coach.

“They’re a good team, but the score does not reflect how  we can play.”

Wayne had nine errors in the loss.

“We came out and played better defense. It took us about three innings to get going and adjust to their pitcher, but once we did our bats heated up,” Durrence said.

Like the coach said, the Lady Bulldogs bats were hot against Burns Flat.

Allie Walck, Brazell, Madden and Moss were all 2-3 at the plate.

Brazell, Fuentes, Madden and Moss each had inside the park home runs.

Parker was in the circle for the Lady Bulldogs and pitched a no-hitter. She had five strikeouts.

Wayne notched another win with a 11-9, back and forth victory over Bethel.

“We started strong, but we made some mistakes and they took advantage,” Durrence said.

With a 6-1 lead after two innings, Bethel chipped away each innings before scoring six in the final stretch.

Down 9-7 with just the bottom of the fifth inning to go, Wayne got four runs to seal the win.

The Lady Bulldogs had 15 hits against Bethel.

Walck was 4-4 at the plate with three RBIs. Brazell, Madden, Moss and Haylee Durrence were each 2-3. Each girl also added an RBI while Brazell added three.

“We hit the ball well in the game against Bethel,” Durrence said.

In their final game of the tournament, Wayne fell to Cyril 9-0.

“We just came out flat in this game. Everything we hit was right at them and we made errors on most of their hits. They only had three earned runs,” Durrence said.

The Wayne head coach mentioned that the OSSAA rankings were released this week. He saw some teams in the top 25 teams that the Lady Bulldogs have already beaten this season.

“I see several teams that are ranked ahead of us. We’re a top 10, 15 team if we play like we’re capable of,” Durrence said.

“This week is important and we’ll need to be playing some of our best ball.”