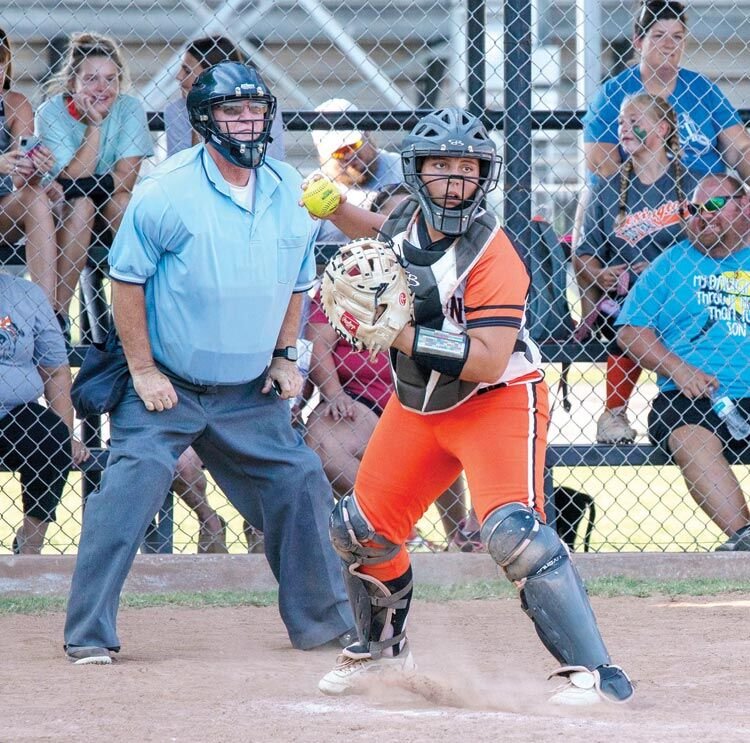 Maddy Pack makes sure base runners don’t get any ideas. The senior has been a rock for the Bulldogs this season. Lexington hosts Little Axe Monday.

Lex isn’t getting enough timely hits right now. Lex is also walking too many batters and its fielding has not been good.

Things can change in a hurry, though. That’s what they are hoping for, at least.

The Lady ‘Dawgs dropped to a 1-5 record on Monday evening following a 12-1 loss to the Davis Lady Wolves.

Lexington lost nine seniors from last year’s 17-6 team that went to the Class 3A State tournament.

Lex now starts or plays a bevy of freshman or sophomores who haven’t had varsity experience.

The inexperience is showing up in the team’s record right now.

“We’ve been struggling pretty badly,” Lexington catcher Maddy Pack said. “It’s really hard to be losing all of those starters from last year. We’re bouncing back with a really young team this year. Most of us are freshmen. But, I think we can overcome this. We just have to get out of our heads and thinking too much.”

Pack is the only consistent starter back from last season. She said the current team is thinking too much and not having fun - which is the name of the game, proverbially speaking.

“We have to quit being negative to each other,” Pack said adamantly. “We’re over thinking stuff such as when we go up to bat or trying to make a play in the field - we are playing scared. We’re thinking negatively instead of positively.

“These young players are not used to it – playing varsity softball. We’ve got to have fun and we need to quit griping about everything – just play the game to the best of your ability and have some fun.”

On Monday, Lexington fell behind Davis, 6-1, after just two innings.

In the top of the third with one out, Lexington let an easy fly ball drop in short center right in between three outfielders and the infield. That was the beginning of another three-run inning for the visitors, making the score 9-1.

“Communication is a key and we still haven’t found that groove,” Pack said of the play. “I’m struggling myself batting wise. It’s picking up a bit and I’m starting to get out of my head.

“All of those girls last year that I grew up with are gone now. It’s been a little bit of struggle trying to adapt to the changes in our team. But, I think we’ll get there soon. We just have to keep our heads on straight.”

Davis (now 8-4) scored another three runs in the top of the fifth inning to make the final score, 12-1. Kourtney Randle of Davis pitched a complete game two-hitter at Lex, allowing just two hits and one run.

Pack and Cora Vazquez were the only Lady ‘Dawgs who got hits (both singles) off of Randle.

Abby Turnpaugh started for Lexington, lasting just 2.2 innings. She allowed nine runs – but only two were earned thanks to three Lexington errors. She was wild as she walked seven and allowed four hits.

Vazquez came in to relieve Turnpaugh but she walked four Davis batters while striking out two.

She allowed a couple of runs before being relieved by Ryli Harmon in the last inning.

“Tonight, we had to be able to throw strikes and we didn’t do that,” Lexington Head Coach Kayla Stewart said. “When we did throw strikes and we let our defense try to make a play, the defense didn’t take advantage of those chances. We have to make those plays and they can’t make mistakes like that.

“We just had too many errors and too many walks tonight. We didn’t make adjustments at the plate. You can’t have those things happen and expect to win.”

The loss to Davis on Monday fell on the heels of 15-0 loss to Sulphur last Tuesday on Aug. 18.

Sulphur (now 11-3) tossed a no-hitter, in fact. Meanwhile, the Lady ‘Dawgs had four errors in that game.

It’s still not too late at this point of the season to make a recovery, Stewart said.

“I think we can recover,” Stewart said. “We’ve got a young team and it’s all about making little adjustments. We have to learn from our mistakes. We have to take what we do right in practice and apply that to our games.

“Abby just had too many walks and you can’t start out like that. When she’s throwing strikes, she’s good. But, we also have to make the plays behind her in the field. We can’t defend walks and you can’t make errors. We’ve just got to shape things up.”

The Lady ‘Dawgs will travel on Friday down to Ardmore for the Plainview Tournament this weekend.