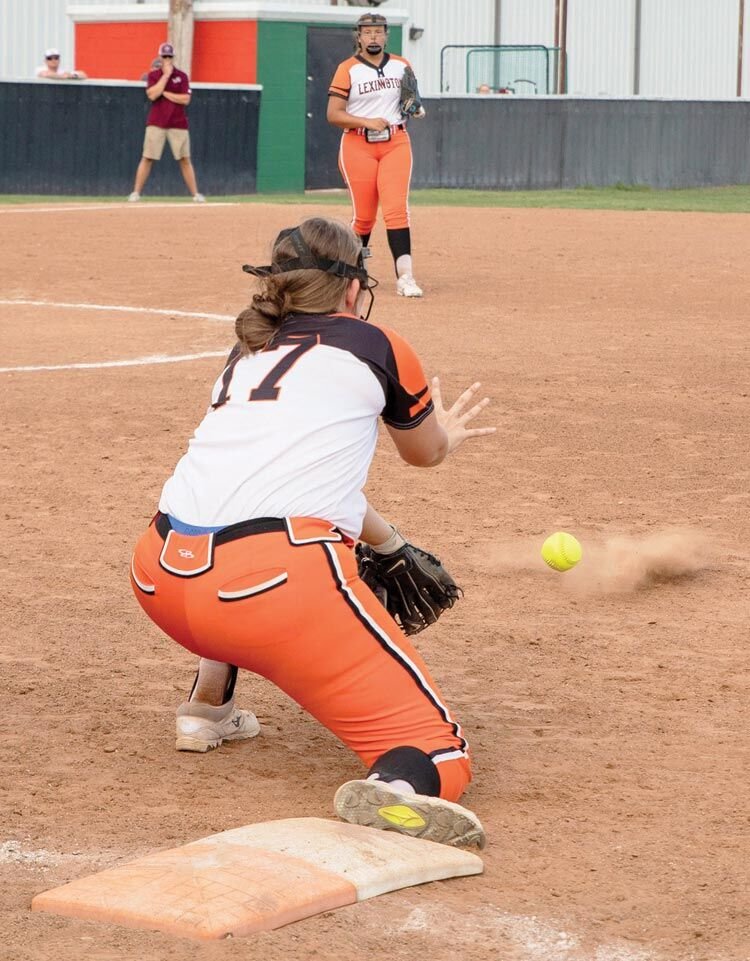 Jaci Idlett scoops up a throw at her first base position against Blanchard. Lexington was defeated by the Lions 7-2. The Bulldogs next play at Davis today (Thursday) at 5 p.m.

The ‘Dawgs were prepared to play Little Axe in a double header but the lights wouldn’t work for the second game. The two teams will resume the second game at 2 p.m. Friday afternoon.

Lexington beat an Indians team that had been in quarantine for two weeks because of the coronavirus and the layoff showed for Little Axe, which is 3-7 this season.

The ‘Dawgs scored nine runs in the bottom of the first inning, three runs in the second, and nine more in the third to secure the win. Little Axe scored once in the first and twice in their half of the third.

Lexington pitcher Abby Turnpaugh was the star of the game both offensively and inside the circle. She hurled three innings and allowed just three hits while walking one and striking out five. She also went 2-for-2 at the plate with a triple and four runs batted in.

Jaci Idlett had two hits and three RBIs for the ‘Dawgs while Leslie Barber, Kiely Givens, and Ryli Harmon also contributed two hits each in a 13-hit offensive attack for Lexington.

Lexington lost to Blanchard, 7-2, last Tuesday. Blanchard scored three times in the top of the third inning, twice in the fifth and three more times in the seventh.

The ‘Dawgs scored twice in the bottom of the second inning. Turnpaugh went the distance in a losing cause, allowing nine hits and two earned runs in seven innings of work. She struck out three batters but once again was the victim of three costly Lexington fielding errors.

Turnpaugh, Barber, and Cora Vazquez got the only hits for Lex against the Lady Lions.

“Little Axe was in quarantine mode for a while,” Lexington head coach Kayla Stewart said. “We’ll make up the second game on Friday afternoon. It was good way to stop our losing streak, though.”

The ‘Dawgs are now 4-11. Stewart said her squad has a lot left to play for and that Lexington is far from done for the season.

“We have a lot of district games left,” Stewart said. “Those are the ones that really matter the most. We’re still looking forward to those district games. Hopefully we can move up in the district and get a good draw for bi-districts.

“We’ll just have to see where we land at regional time. We have faith in the way that the district and regional tournaments are set up. We still have a chance to get a good draw and be in a good position.”