Lex opens with a W at home 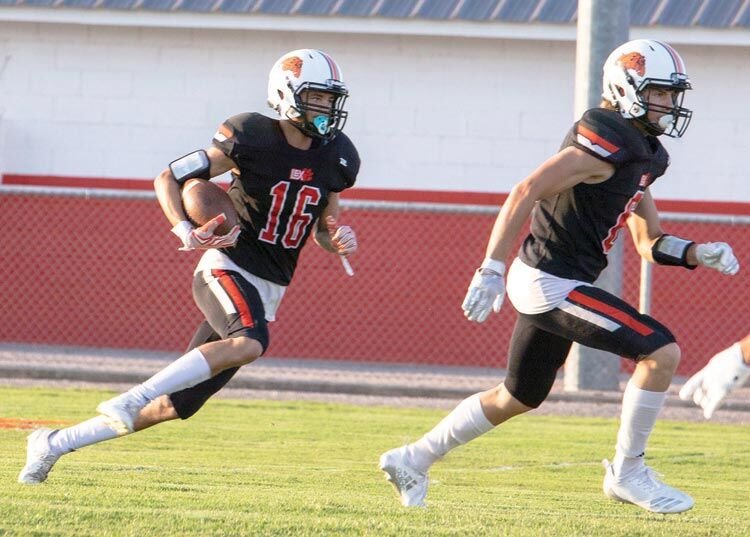 Dylan Cottrell blew the game wide open for Lexington Friday with an opening kickoff return for a score. The Bulldogs defeated Allen 21-7. 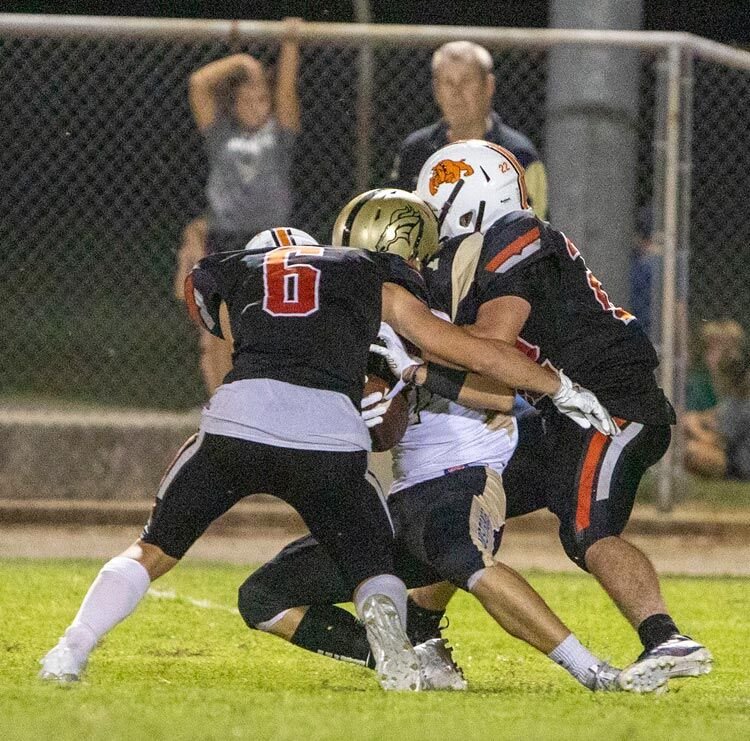 Heath Winterton (6) and Destrie Shea (22) wrap up and tackle an Allen ball carrier Friday night during Lexington’s 21-7 win over the Mustangs.

The Lexington Bulldogs football team started the 2020 season off on the right foot, beating the Allen Mustangs, 21-7, last Friday night on a hot and muggy evening at Floyd West Field.

Lexington went 6-5 last year and made the Class 2A playoffs for the second year in a row, losing a heart-breaking 49-46 contest to the Lindsay Leopards.

But, the ‘Dawgs made the debut of new Lexington Head Coach Keith Bolles a great success.

Bolles took over this year for Dale Berglan. Bolles last head coached at Newcastle for 12 years from 2005 until 2016.

Things got off to an auspicious start right from the beginning for Lex.

Dylan Cottrell returned the opening kickoff 82 yards for a touchdown and Israel Trejo kicked the point-after attempt for a quick 7-0 Lexington lead.

Then, with 4:06 left in the first quarter, running back Destrie Shea punched the pigskin over the goal line for another touchdown.

The ‘Dawgs attempted for a two-point conversion but failed, making the score 13-0 at the end of one quarter of play.

The Mustangs (who went 3-7 last year under head coach Rob Green) scored a touchdown with 5:02 remaining in the first half.

“We need to figure ourselves out here at halftime and get our rotations going. For the first game of the season, everybody is really hyped up. We just need to get more on an even keel.”

Lexington did that in the second half. The ‘Dawgs scored a touchdown with 2:11 remaining in the third quarter as running back Avery Armstead bulled his way straight up the middle for a one-yard TD run.

Armstead proceeded to make the two-point conversion for Lexington, who led 21-7 at that point and notched the finally tally.

“The kids found ways to step up and our coaches were putting kids in who didn’t have a lot of reps and they all did a tremendous job,” Bolles said after the game. “What a great job Coach (Jared) Garrett, Coach (James) Albertson, and Coach (Kyle) Wells did on the defensive side.

“Our defense played really well. We have some things to work on offensively. But, that’s what we get paid for. By next week, we’ll see those corrections and get things fixed.”

Shea was a beast out of the backfield for Lexington. He rushed for 92 yards on 21 carries.

Armstead was stout, too, running for 17 yards on six carries.

Quarterback Ezra Faulkenberry connected on four of his 10 passes for 60 yards, with a long toss of 27 yards.

Cottrell caught a 27-yard pass, Armstead an 18-yarder, Dakota Tarp had a 10-yard reception and Shea caught a 5-yard pass from Faulkenberry.

Both teams were exactly even in total yards gained with 155. The difference in the game was probably penalties as Lex committed eight for 72 yards while Allen committed 10 for 89 yards.

“That was a tremendous play on the opening kickoff,” Bolles said. “Our special teams coach is Danny Somers. He does a great job. Destrie Shea is a tough runner. I thought Avery Armstead did a great job. Our front line did an awesome job. There are just a few things we need to shore up on offense and we’ll be ready for the next opponent.”

One opponent down, another nine are coming up – or, at least, that’s what Cottrell is hoping for in light of the ongoing coronavirus pandemic.

“It just felt good to be out on the field tonight,” Cottrell said. “I’m just glad we got to play the game. With all the stuff that’s been going on with the virus, I’m glad our season didn’t get cancelled. I’m sincerely just glad to be here right now.

“I hope the virus doesn’t end our season because I really want us to go back to the playoffs this year and get our first playoff win. I felt like I had a pretty good game tonight. Now, I made a lot of mistakes tonight that I need to work on. But, it feels good to get our first game and our first win under our belts.”

Armstead had a terrific game for the ‘Dawgs.

“I just came out here tonight on our home field and played the game of football to the best of my abilities,” he said. “I tried to play aggressively and just play the way I know how to play this game. I like to think of (NFL player) Marshawn Lynch’s style. He was pure power. I try to pattern my play after his.”

Shea was undoubtedly the offensive star of the evening for Lexington.

“I think it was a huge team effort tonight,” Shea said. “We did really well as a team and we executed play after play for the most part. It was a great effort by everybody. Our defense did a really good job. At first, we were moving the ball slowly.

“But, we did well towards the end of the game. I was motivated for this game. I was ready to put my heart on the line. I really wanted to get a season opening win. I just kept going and going and never stopped.”

The one thing that marred Lexington’s victory was the gruesome injury to Keegan Martin when he appeared to suffer a compound fracture to his right ankle in the third quarter.

“I hated to see that happen,” Shea said. “But, in the end, we won the game for him. I hope he gets well soon. It sucks losing a player like him. He did really well on the line. It’s going to really suck not having him at all. He had a great game, though. I’m proud of him.”

Lexington’s next game will be at Wayne at 7 p.m.