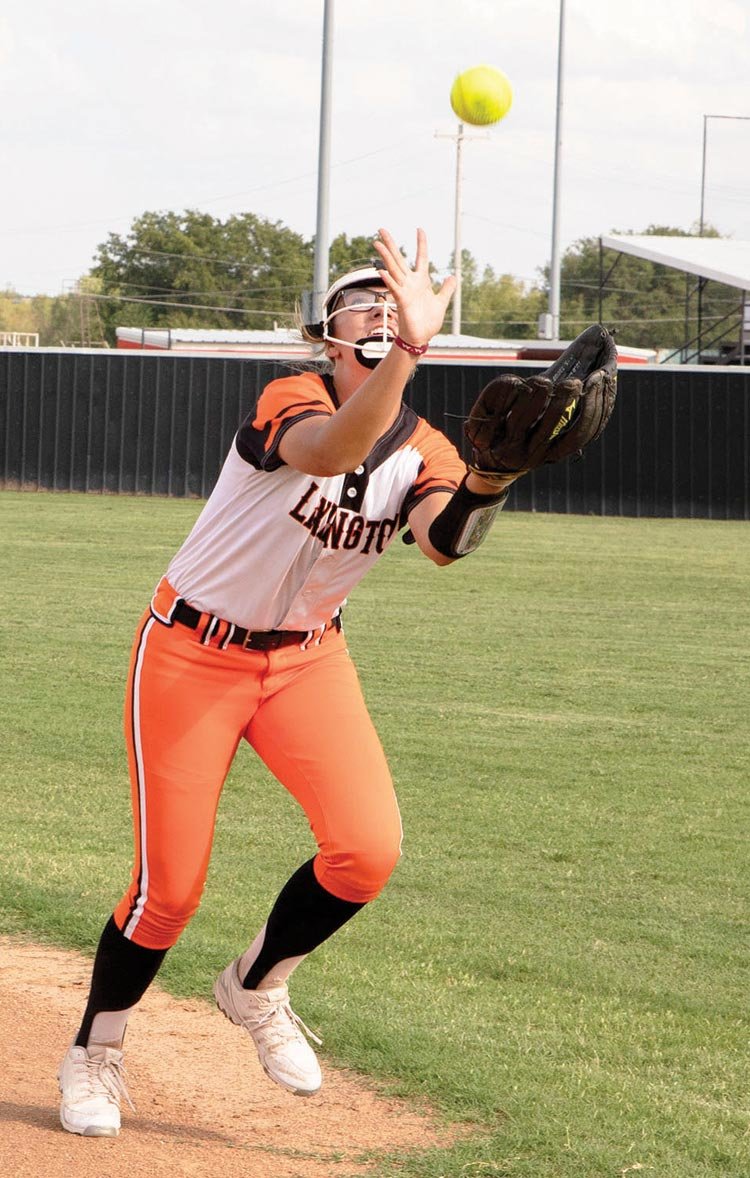 Promise Houck tracks down a fly ball for the Lexington Bulldogs. Lexington is gearing up for the State playoffs.

Lexington’s fast-pitch team finally picked up some steam last week as the Lady ‘Dawgs went 3-3 and improved their overall record to 7-13.

Lex played a double header at home on Monday against Community Christian (5-9). The two teams played two games because their first game on August 25 was postponed. In the opener, CCS was the home team.

The score was tied, 2-2, when the Lady ‘Dawgs put four runs on the scoreboard for a 6-2 lead. Then, in the top of the seventh, Lexington cut loose with seven runs for a 13-2 victory. Overall, the Lady ‘Dawgs had 13 hits.

Lexington posted a 10-0 run-rule victory in four innings in the nightcap.

Cora Vazquez tossed a one hitter while walking two and striking out five. Harmon had two hits and two runs batted in. Vazquez and Izzy Pack each had two ribbies and one double in the game. Houck and Kiely Givens also had doubles for Lex.

Last Saturday, Lexington entertained Sulphur and lost, 9-1, to the visitors. The Lady ‘Dawgs had just two hits against Sulphur – singles by Leslie Barber and Vazquez.

Turnpaugh went the distance against Sulphur, hurling seven frames while giving up nine hits, two earned runs, and two walks with one strikeout.

Last Friday, Lexington beat Little Axe 12-1. This time, the lights on the field didn’t go out and the Lady ‘Dawgs picked up their second win of the week against the Indians, who lost to Lex, 21-3, in earlier this month.

Lexington scored twice in the first, five times in the second, twice in the third, and three more times in the bottom of the fifth. Turnpaugh and Vazquez both pitched for the Lady ‘Dawgs with both showing superiority over Little Axe hitters as the two combined on a no-hitter. Vazquez was particularly impressive with nine strikeouts and no walks allowed.

Turnpaugh, Barber, Vazquez, and Givens all had two hits in the win for Lex. Vazquez helped her own cause at the plate with a double and four RBIs.

Last Thursday, the Lady ‘Dawgs traveled to Davis where they lost a hard-fought contest, 5-2.

Lexington was led on offense by Givens, who had two hits including a double. Davis scored three runs in the bottom of the fifth to secure the win.

Lexington lost at Bridge Creek, 7-4, last Tuesday. The Lady Bobcats scored three runs in the bottom of the third, two in the fourth, and two more in the sixth.

Lex took an early 2-0 lead in the top of the first inning but managed just one run in the sixth and one more in the seventh. Vazquez, though, continued her hot hitting as of late, going 4-4 with an RBI. Maddy Pack went 2-4 with a home run and two ribbies. Givens, Harmon, and Izzy Pack also had two hits for the Lady ‘Dawgs.

“We picked up two district wins against Little Axe last week which was great,” Lexington Head Coach Kayla Stewart said. “We still have some work to do. We still have to limit our errors on defense and make adjustments at the plate sooner which hurt us against Davis, Sulphur, and Bridge Creek.

“But, Abby Turnpaugh, Cora Vazquez, and Ryli Harmon are all doing well for us in the circle. As long as our defense will make plays and our offense will make small adjustments, we will be in a good spot come playoffs.”

Lexington was scheduled to host Crooked Oak for a double header on Tuesday.