Lady ‘Dawgs starting to mesh as a team 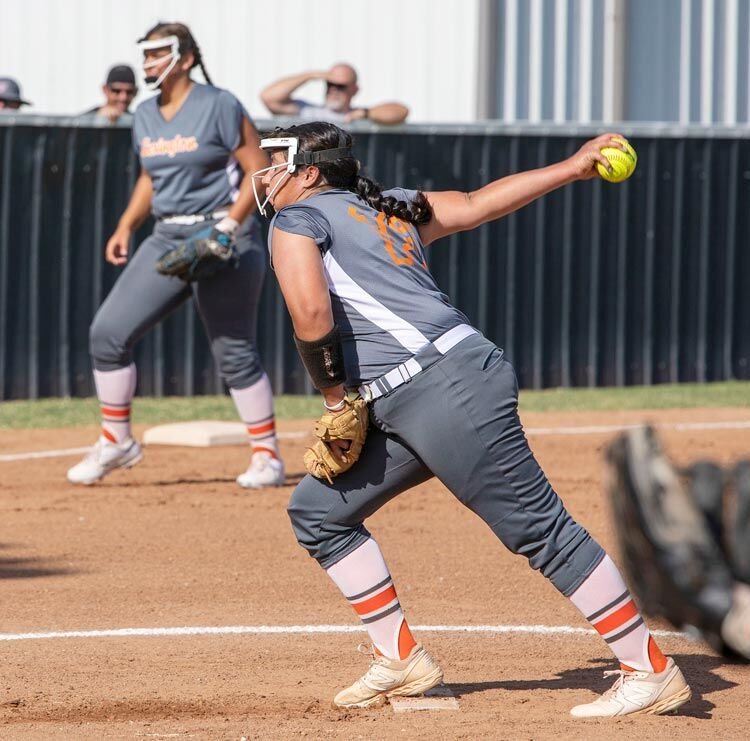 Cora Vazquez goes home with a pitch during relief work for the Lexington Bulldogs. The ‘Dawgs are 3-7 this season after picking up two wins in the Plainvew Tournament.

The Lexington fast-pitch team won two games last weekend in the Plainview Tournament at Ardmore and soothed a little of their woes.

The Lady ‘Dawgs are 3-7 and seem to be finding their way after introducing many new players into the lineup this season.

Lexington (which went 17-6 last year and made the Class 3A State tournament) first played the Class 5A Ardmore Tigers (6-8) last Friday. The Lady ‘Dawgs won, 5-4, behind the pitching of Ryli Harmon.

“We still need to clean things up on defense and our bats got off to a slow start. We did a good job of getting people on. We just didn’t have the timely hits early.

“Maddy Pack hit a three-run, walk-off homerun and had a really great tournament for us. She ended the tournament with four home runs and 11 RBI’s.”

Healdton (6-6) scored its three runs in the third inning. Lexington scored twice in the bottom of the fifth but couldn’t go any further.

Turnpaugh pitched a solid game for the Lady ‘Dawgs. She allowed four hits and two earned runs while walking nobody and striking out five batters.

Again, Lexington errors were a “bugaboo” as the team committed five miscues in the field.

Healdton’s pitcher was fantastic, though. She pitched a one-hitter and struck out seven Lady ‘Dawgs as Givens had the only safety for Lexington in the game.

“Abby Turnpaugh pitched a great game,” Stewart said, “but our defense and bats let her down. It’s hard to win games with one hit and five errors on defense.”

Turnpaugh was the winning pitcher for the Lady ‘Dawgs and Pack provided the power behind Lex’s attack at the plate, smashing two homers and driving in seven runners.

Izzy Pack and Leslie Barber both had singles. Vazquez, Harmon and Idlett had two hits each. All three clipped a double against Valliant, too. The Lady ‘Dawgs had 10 hits in the game and only one error.

“Once again Abby Turnpaugh pitched a great game,” Stewart said. “Our bats finally came alive and helped her out.”

Lexington finished the Plainview tourney on Saturday with a 7-3 defeat at the hands of Marlow.

Vazquez started for the Lex while Izzy Pack relieved.

Marlow (8-5) scored three in the first inning and four more runs in the fourth. The Lady ‘Dawgs scored once in the first and twice in the top of the third.

Maddy Pack had two hits (including a home run) while Turnpaugh, Vazquez, and Harmon singled.  Lexington only made two errors in the game – but, they were costly, according to Stewart.

“Cora Vazquez and Izzy Pack pitched well for us,” Stewart said. “Again, defense let us down. We are young defensively and we are still learning how to play together and overcome difficult situations.”

All in all, Stewart was very pleased with what she saw from her young and still-developing squad last weekend at the Plainview tourney.

“I know we went 2-2 in the tournament, but I felt like we started playing better as a team,” Stewart said. “We were finally meshing and doing a lot of things right. We still have little things to fix, but I’m proud of the team effort this weekend.”

Monday’s game against Little Axe was postponed due to a coronavirus outbreak at Little Axe.

The Lady ‘Dawgs were scheduled to play at home at 5 p.m. on Tuesday against Sulphur, weather permitting. Lex then plays host to Crooked Oak next Tuesday.