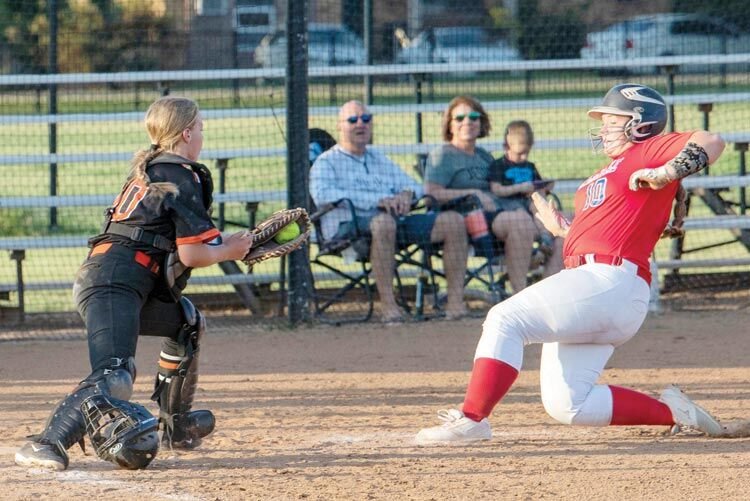 Emily Woody prepares to slap the tag on a Bray-Doyle baserunner Friday afternoon during Wayne’s 6-5 extra-inning game against the Donkettes.

Monday afternoon Wayne added another tally to the win column with a 5-2 victory over Fletcher. This brings their season record to 11-6.

Originally scheduled to host the Lady Wildcats, Wayne traveled to Fletcher where they came out swinging. The Lady Bulldogs scored five runs on 13 hits in the win.

Several Lady Bulldogs had multiple hits in the win. Kaylee Madden was 3-4 with an RBI, Allie Walck and Parker were both 2-3. Walck also added two RBIs. Haylee Durrence was 2-4 at the plate and Faith Brazell had two RBIs in the win.

Last Friday Wayne hosted the Donkettes of Bray-Doyle and came out with a 6-5 win.

With nary a run scored through two and a half innings, Wayne struck first with one run in the bottom of the third.

Bray answered with two runs of their own and three in the third.

Bray held the 5-2 lead going into the bottom of the sixth inning.

Wayne added one run in the bottom of the sixth and two more to knot the score at five-all through seven innings.

The Lady Bulldogs held Bray-Doyle runless in the top of the eighth.

In the bottom of the eighth, Walck had a walk-off single to score the winning run.

The bats were hot for Wayne in the game.

The Lady Bulldogs collected twelve hits in the win and several girls had multiple hits. Daliyah Fuentes, Mayce Trejo, Madden and Brazell each had two hits.

Moss and Emily Woody each had homers in the win. Wayne also had six RBis against the Donkettes.

Brazell was in the circle for Wayne. She fanned six batters and gave up five runs.

Wayne had seven hits in the win. Walck went 3-3 and scored three runs. Parker, Trejo, Brazell and Madden rounded out the hits at the plate.

Brazell and Trejo had three RBIs a piece.

Parker was in the circle for Wayne. She pitched seven innings, allowing two runs on seven hits. She struck out two and gave up just one walk.

The Lady Bulldogs jumped out on top, scoring two in the first inning, one in the third and three in the fifth.

Central Marlow got two across home plate in the top of the sixth, but couldn’t sustain a come back.

Wayne was scheduled to travel to Elmore City, weather permitting, on Tuesday. The scheduled game with Crooked out on Thursday was canceled and they are on the road Friday to Velma-Alma to round out the week.