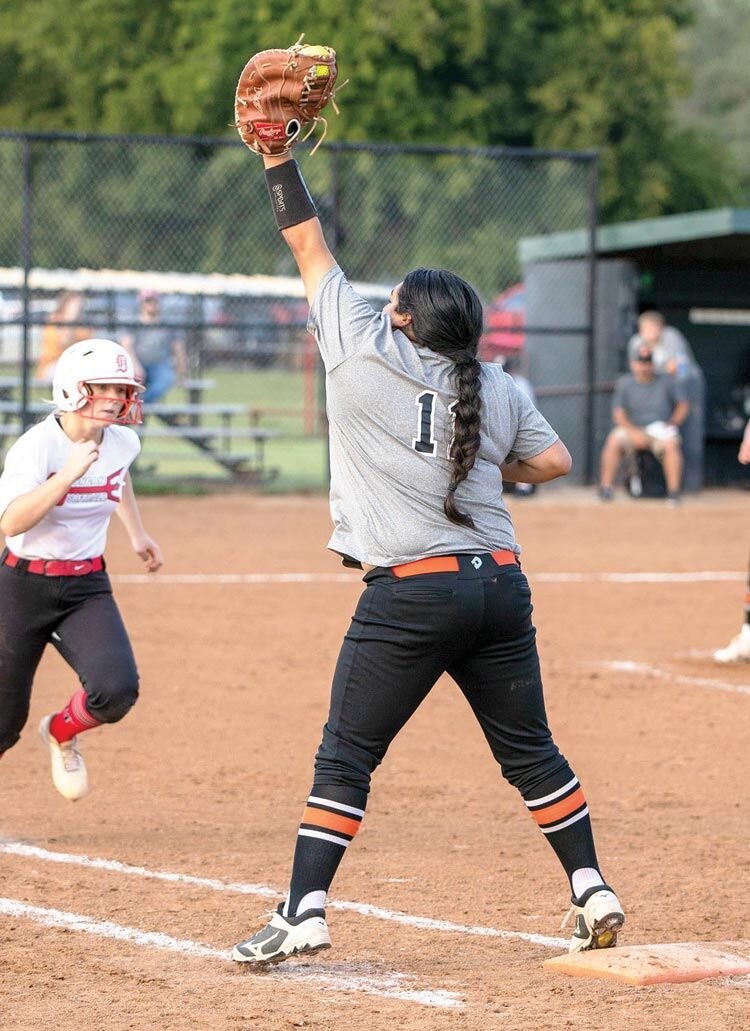 Mayce Trejo stretches to grab the ball and get the out. The Wayne Lady Bulldogs are hosting Elmore City for District play today (Thursday) at noon and 2 p.m.

In his first season at the helm of the Wayne Lady Bulldogs, coach Charles Durrence has them hosting Districts this week.

“We’re happy we get to host Districts and we like our chances. If we play like we’re capable of playing we can go out and beat a good Elmore City team,” Durrence said.

According to the coach, Wayne is firing on all cylinders.

“Our pitchers are throwing well. Our defense is solid. And our bats are hitting when we need them to, with runners in scoring position,” Durrence said.

Scheduled to host Elmore City and Alex, Durrence was informed that Alex was pulling out due to issues related to COVID-19.

District games are Thursday at 2 and 4 p.m. The if-necessary game is will be 2 p.m. Friday.

Tuesday afternoon Wayne was in Rush Springs where they bested the Lady Redskins 5-1.

Junior Haiden Parker was in the circle for all seven innings. She had 12 strikeouts and only gave up one run on just two hits.

Wayne had seven hits in the win.

“It took us a while to get our bats going. But, when we started hitting, we hit the ball really well,” Durrence said.

On Thursday, for their final home of game of the fast-pitch season, Wayne beat the Lady Bulldogs of Stratford, 5-0.

Parker was once again in the circle for Wayne. She pitched for five innings and had four strikeouts.

Freshman Faith Brazell came in as relief for the final inning. She gave up just three hits and the coach was pleased with his team’s defense behind Brazell to close out the game.

Wayne had 14 hit in the win. Including a 3-3 plate performance for Daliyah Fuentes. She also added an RBI. Several other Lady Bulldogs also had multiple hits, including Kaylee Madden, Kamryn Moss, Mayce Trejo and Brazell.

“We came out and played really well. Both pitchers are thowing well and our defense is steady. They are making routine plays.”

Finally, Wayne traveled to Wynnewood last Friday where they beat the Lady Savages in a four inning run-rule, 20-2.

“We hit the ball really well against Wynnewood. Everyone got on base and bats were hitting,” Durrence said.

Nine Lady Bulldogs had hits in the win that included 16 hits and 17 RBIs.

Moss was the leader at the plate, going 3-4 with five ribbies, including a 3-run homer.

According to Durrence, his team will be ready for Thursday.

“We had a good practice on Monday and even though the rain puts a damper on things for Tuesday, I’m excited about our chances,” Durrence said.