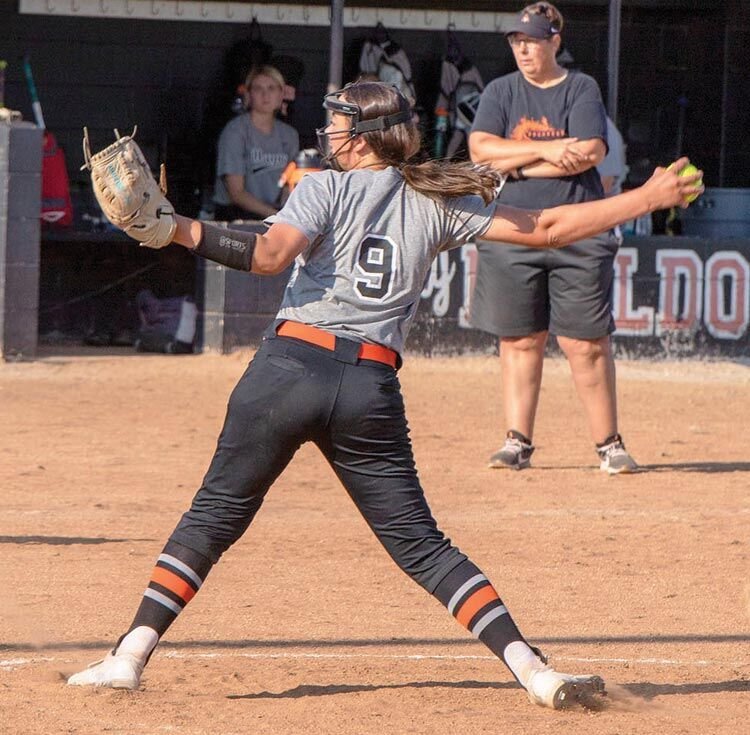 Faith Brazell delivers a pitch for Wayne. The Bulldogs will play in the Sterling Shootout beginning today (Thursday).

Last Friday head coach Charles Durrence and his Lady Bulldogs traveled to Velma-Alma where they fell to the Lady Comets 9-6.

Wayne started slow, not scoring a run until the top of the fifth inning. Velma added a run in the bottom of the fifth to make the score 4-3 with Wayne having the advantage.

Velma held Wayne scoreless in the top of the sixth then added six runs to take the lead.

Wayne scored two runs in the top of the seventh, but it wasn’t enough to regain the lead and win.

Freshman Daliyah Fuentes led the team at the plate going 3-3 with four RBIs. Faith Brazell was right behind her, going 3-4. She also added an RBI. Emily Woody and Haylee Durrence had two hits apiece.

On Thursday, Wayne was scheduled to host Crooked Oak, however the Lady Rufnex had to cancel due to COVID.

Maysville traveled to Wayne for a double header where the Lady Bulldogs bested the Lady Warriors in both games, 16-3 and 10-0.

In the first game, Wayne came out firing, scoring 13 runs in the bottom of first inning. Maysville, who scored one run in the top of the first, added one more in the top half of both the second and third innings.

Wayne added three more in the second and nabbed the run-rule victory.

The bats were hot for the Lady Bulldogs as they notched 17 hits and 15 RBIs in the win.

In the second of two games with Maysville, Wayne scored three in the first, four in the second and three more in the third while holding Maysville scoreless to once again run-rule the Lady Warriors.

Brazell, still with the hot bat, was 3-3 at the plate with three RBIs. Walck and Fuentes added two ribbies a piece.

In the circle was Brazell for all three innings. She allowed one hit and struck out five batters.

Wayne (13-7) was scheduled to host Paoli Tuesday evening and be in the Sterling Shootout from Thursday to Saturday.