Warriors prove it again in 47-6 thrashing of Idabel 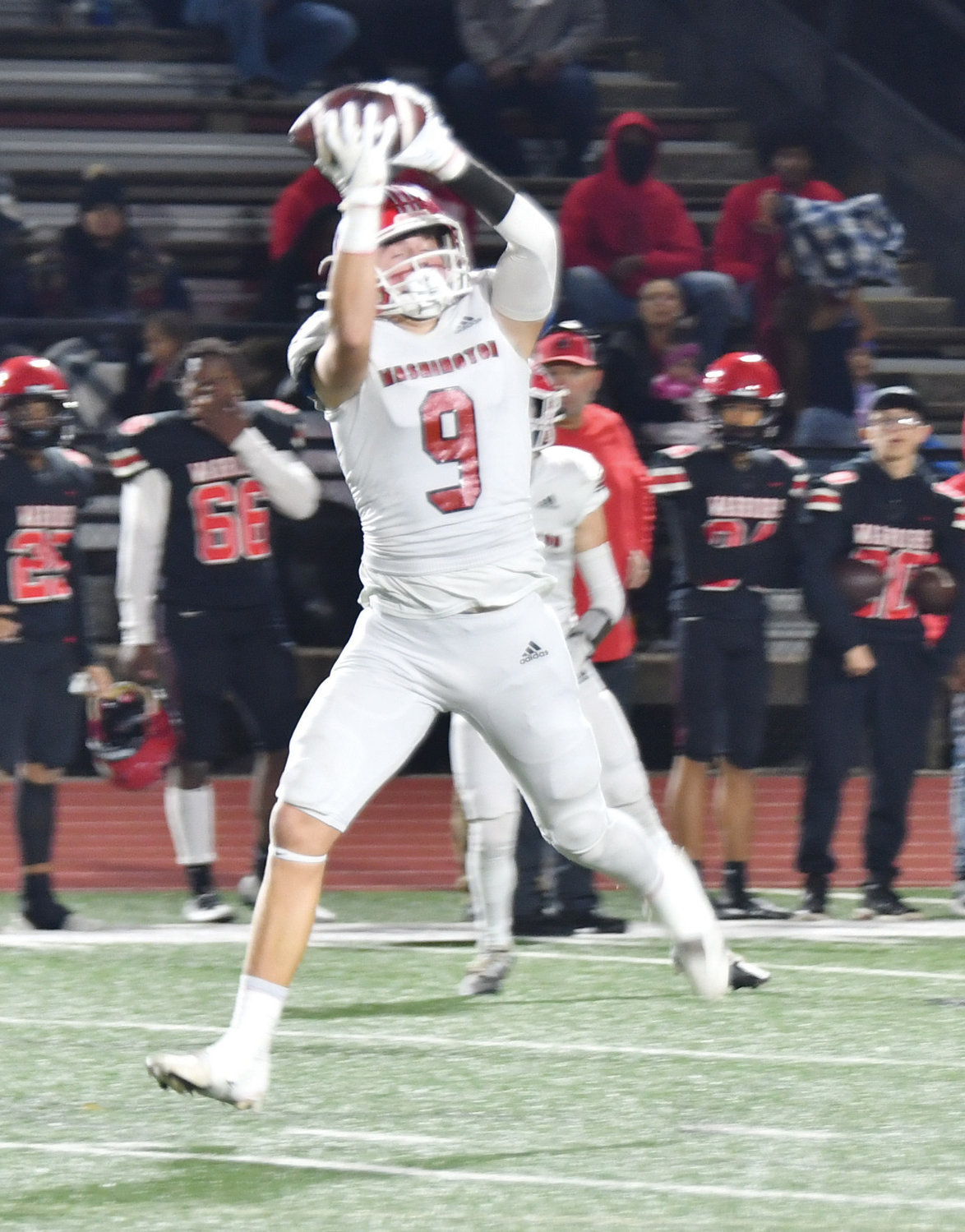 Washington sophomore Nate Roberts works over the middle last Friday during the Warriors’ 47-6 win over Idabel. Roberts caught a 79-yard touchdown pass from Major Cantrell in the game. Washington will play Jones in the semifinals Friday at Putnam City at 7 p.m.
Ron Ladlee 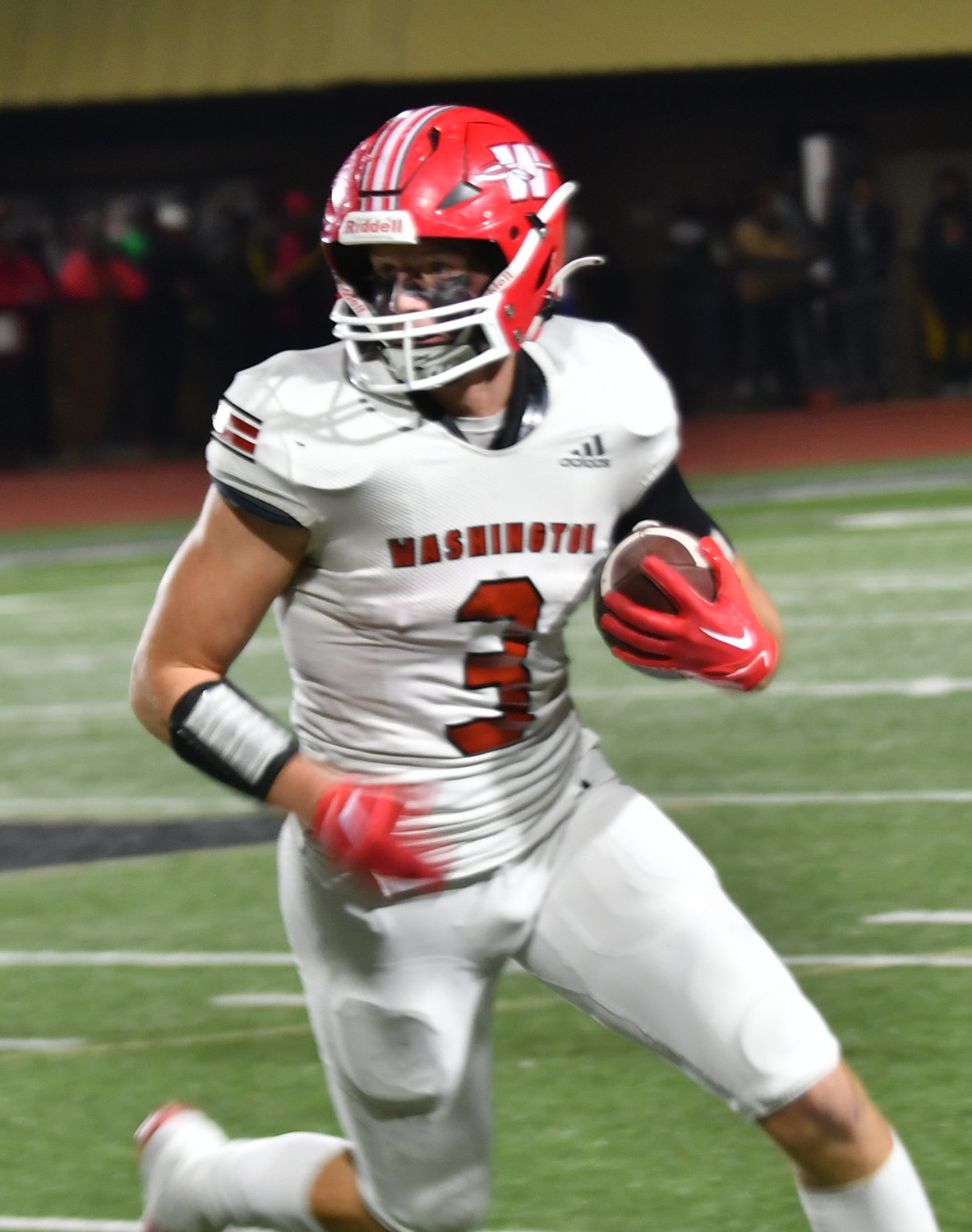 Washington junior Cooper Alexander tucks the football and gets his eyes upfield during the Warriors’ 47-6 win over Idabel last Friday. Washington will play Jones in the semifinals Friday at Putnam City at 7 p.m.
Ron Ladlee
Previous Next
Posted Thursday, December 1, 2022 9:00 am
John D. Montgomery

They came out and topped that performance in last Friday night’s 47-6 thrashing of Idabel at McAlester in the state quarterfinals.

The Warriors once again proved the old football adage that it all starts up front.

“That was our best performance of the season,” Beller said praising the stellar play of Caleb Bruce, at center, guards Jordan Vanya and Tanner Winlock and tackles Baylor Haynes and Wyatt McCauley.

“We just man handled them up front on both sides of the ball,” Beller said.

And then there was the sparkling play of linebacker Keller Howard who led the team with 10 tackles. Spaulding finished with nine tackles including two for losses and had one quarterback sack.

Milner registered seven tackles including one for a loss and a sack. Easton Berglan and Ben Vaughn both had six tackles in the contest that was over in the first half.

Idabel’s Warriors made three first downs in their first couple of possessions but only made four more the rest of the game against the first team defenders.

“We dominated the interior,” Beller confirmed. “And then we asked our outside linebacker Ben Vaughn to help stop the run but at the same time cover the flat for passing. It was a tough task but he was able to do it very effectively throughout the game.”

Cole Scott scored the first of his three rushing touchdowns in the opening quarter. He found the end zone twice in the second period on bursts of 64 and 26 yards. The senior running back finished with 244 yards on 21 carries.

Junior quarterback Major Cantrell was 7-11 passing for 163 yards. He had touchdown tosses of 79 yards to Nate Roberts and 44 yards to Cage Morris. Hudson Howard logged an eight yard scoring run and Dawson Thomas toted the pigskin to pay dirt from 16 yards out to close out the Warriors’ scoring.

Idabel were as advertised as athletic and fast but the line play proved to be too much for the McCurtain County Warriors to handle.

“This time of year it is usually the team that controls the front line wins,” Beller continued.

And Washington won the turnover battle not committing any while Vaughn recovered an Idabel fumble.

The defensive secondary up held it’s duties not allowing any long plays which had fueled Idabel all season long.

The semifinals will be this Friday night at Putnam City pitting the Warriors against the Jones Longhorns for a third playoff year in a row. The two teams squared off September 9 when Washington posted a 33-14 victory at Jones. The two schools met in the second round in 2020 and the same round in 2021, both Washington victories.

The Longhorns will be very multiple out of a variety of player groupings in their spread offense.

“They have progressed into more of a power run game and quarterback run team. He is their catalyst. He’s very athletic making direct quarterback runs. He’s played slot receiver and wide receiver in the past but moved into the quarterback position and has done a great job,” Beller said.

“The Longhorns will base out of a 3-4 on defense and will sometimes slide into a four man front. They used that a lot against us earlier this year. They are very sound on defense.”

Beller said the key boils down to controlling the big plays and their quarterback. And on offense we need to control the front line. We hit our stride at Comanche and then in all three games in the playoffs playing extremely well,” he said. “With all our injuries it’s been hard to keep continuity.”