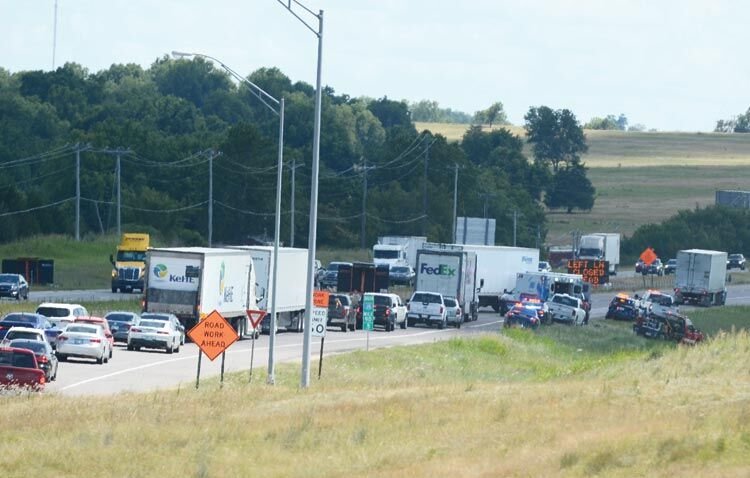 A Texas man was critically injured in a terrible two vehicle accident on Interstate 35 last Friday afternoon. He was air lifted to OU Medical Center with head, trunk internal and external injuries.

A grinding two vehicle injury accident on Interstate 35 last Friday at mile marker 91 seriously injured a Heath, Texas man and closed the southbound lanes of the interstate for over two hours.

Investigating Oklahoma Highway Patrol Trooper Bryan Landers said a 2014 Freightliner driven by Anthony Hill, 36, of Burleson TX ran into the back of a 1995 Ford Truck driven by Leighton Ashford.

The force of the collision broke the driver’s seat and ejected Ashford out the back windshield of his truck into the bed, Landers reported.

Ashford was transported by Survival Flight to OU Medical Center in Oklahoma City where he was admitted in critical condition with head, trunk internal and external injuries.

A 12-year-old passenger in the Ashford vehicle was transported to Purcell Municipal Hospital where he was treated and released.

Landers said both vehicles were southbound on I-35 coming into a construction zone. He said traffic had started to slow down and the freightliner failed to slow quickly enough.

Hill was not injured in the accident that occurred at 3:18 p.m. last Friday. The southbound lanes of the interstate were closed for two hours and eight minutes.

The trooper’s report said seat belts were in use in both vehicles.