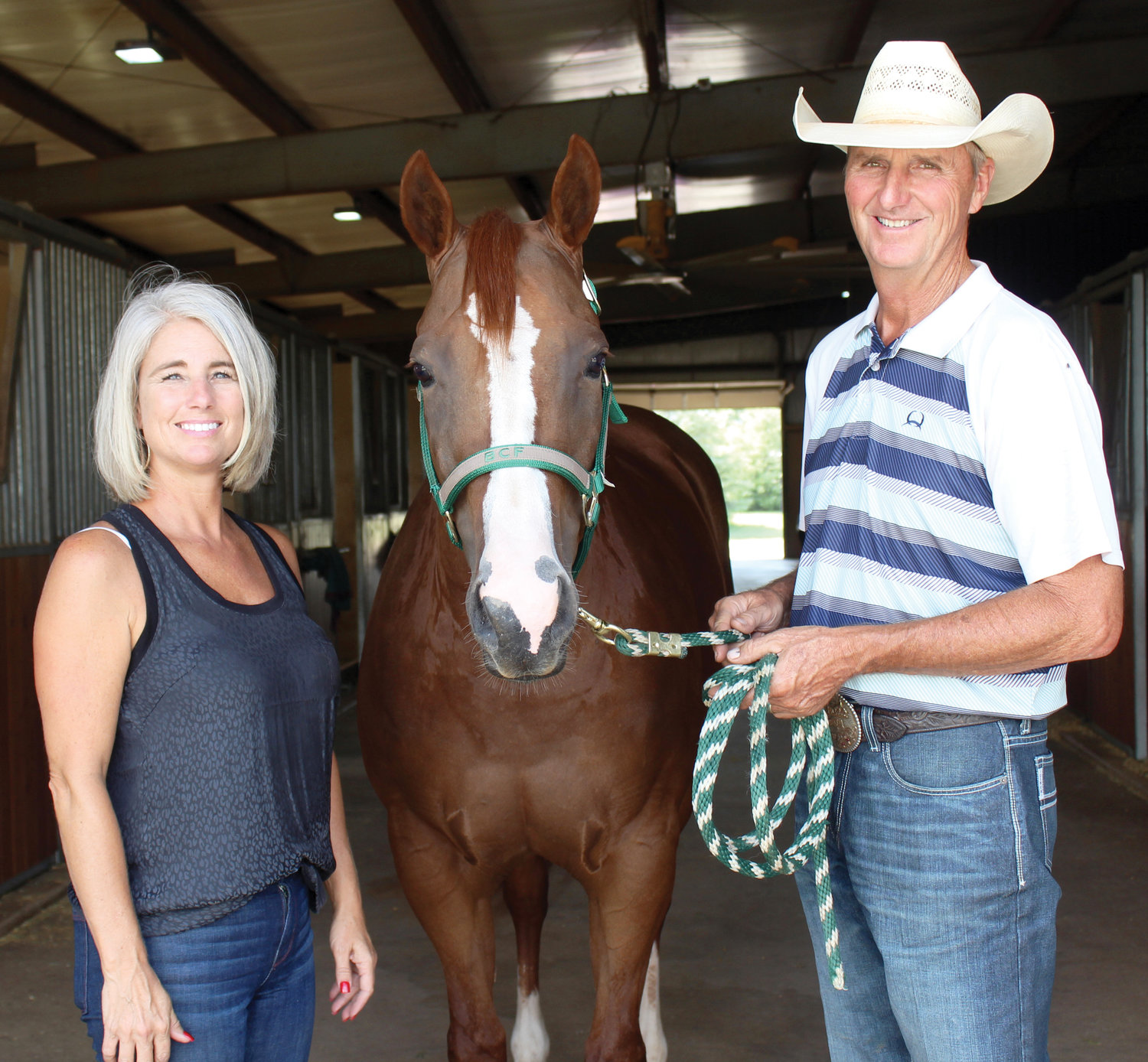 Becky and Gil Galyean are pictured with Knockin’ It Out, one of the western pleasure stars in their show barn southeast of Purcell. The Galyeans train and show the 6-year-old mare for owners Richard and Betty Jo Carr of Bremen, Ind.
Jeanne Grimes
Posted Thursday, September 22, 2022 9:00 am
Jeannie Grimes

The prairie southwest of Purcell rolls gently to the horizon and beyond.

It is a welcoming place for horses, people and dogs.

This is where plans are hatched, champions are made and dreams really do come true.

This is home base for Gil and Becky Galyean, ranked among the world’s finest American Quarter Horse western pleasure trainers, to ply their highly specialized - and profitable – trade.

The Galyeans met on the show circuit.

Becky is from Gardner, Kans., a bedroom community to Kansas City. Gil hails from Gravette in northwest Arkansas.

Becky competed in all-around Quarter Horse events. She took a hiatus from showing while earning a degree in nursing, but started back up with western pleasure horses after college.

The couple met in the late 1990s and began dating.

Gil left Arkansas and persuaded Becky to resign her nursing position in a surgical practice and join him.

“We looked at properties in north Texas and Oklahoma,” Gil recalled.

Eventually, they put down roots in McClain County, drawn by the history of the Quarter Horse breed around Purcell.

“When you’re young and starting to show and you hear these names – Jerry Wells, A.B. Green, Frank Merrill - these famous people living in Purcell,” Gil said.

Their move to the “Quarter Horse Capital of the World” was at the request of the prestigious Paws Up at Oklahoma Stud operation.

Paws Up was created and owned by Nadine Lipson.

Much of the physical plant that is Oklahoma Stud today is her handiwork.

“They wanted us to come and train out of that facility,” Gil said.

It was a golden opportunity and the couple took it in January 1998.

They would marry the following August.

When she sold it, the Galyeans liked Purcell so much they decided to stay in the area.

They first established a ranch near Wayne and later moved Gil Galyean Quarter Horses to its  present location.

The Galyeans have two sons – Garrett graduated from Purcell High School in 2019 and Brody will graduate in 2023.

Both have suited up for the Dragons as quarterbacks.

In addition to her training responsibilities, Becky is a willing Mama Dragon known to fly home from a show to catch a football game.

Galyean Quarter Horses keeps 30 to 40 client-owned horses in training year-round, as well as 15 they own.

Their clients are located from coast to coast across the United States, as well as Canada.

Things slowed down during the COVID pandemic, but have rebounded with bigger shows back on the schedule.

While they specialize in western pleasure, Gil and Becky also compete in other events like western riding and cutting.

Then there’s the challenge of “doing it at a high level” that is probably what draws them to it.

Becky calls it “sort of a form of dressage.”

“Getting their backs up, elevate, slow lope,” she explained.

Those traits are sought after  – and specifically bred for – today.

“Breeding is more specialized than 30 years ago,” Gil said. “The western pleasure horses here are out of sires and mares that have had success in the show ring.”

Though not a breeding ranch per se, Becky said they flush and harvest eggs from five to 10 show mares a year.

The eggs are fertilized in vitro and the embryos are then implanted in surrogate mares that carry the  foals to term.

The procedure allows the donor mares to remain in competition.

Starting in December or January, the training picks up for coming 2-year-old.

They are acclimated to being handled and are started under saddle.

If things go smoothly, a 2-year-old might be ready for a show in six to seven months.

For most, however, they are 3-year-olds before they are shown.

“We always let the horses tell us,” Becky said.

“We try to teach leads and to carry themselves in a collected manner,” Gil said.

Horses in training are handled every day and are ridden, turned out in the round pen or exercised on the walker.

Becky shows only those horses she and Gil own. That enables her to maintain her non-pro status.

It’s obvious there are no days off.

“There’s always an animal to care for,” Becky said. “There’s not a day we don’t manage this operation. We are responsible for a lot of people’s horses.”

And those horses aren’t cheap.

“We feel we deal in the upper end of the breed,” Gil explained.

He estimated 99 percent of their clients want to show and compete themselves.

After all, it’s their horse.

“But they also like Gil to show their horses,” Becky said.

Not every horse is suited for the highest level of western pleasure.

She said the ranch breaks 25 horses a year.

“We’re lucky if three or four are able to compete at our level,” she added. “The others may move into different events. It takes a very special horse to win a major event.

For Becky, the office work is as demanding as the hours spent horseback.

“Office work takes up a lot of time,” she conceded.

There’s the billing, show entries, compiling a financial record for every horse in training.

Last week, the Galyeans were preparing to take 13 horses to next month’s Quarter Horse Congress in Columbus, Ohio.

On the road to a big show like the Congress, the Galyeans travel in a convoy.

There are at least two rigs and sometimes three “every time we go,” Becky said.

One year she figured out they were away from home 125 nights.

Horses were a natural career choice for them.

Gil’s father was a trainer and he has a brother and nephews who also train.

“Horses are a large part of my family’s life,” he said. “Becky’s as well. We’re lucky to have had horses in our lives.”

“It’s hard work but it’s rewarding. And we love horses.”