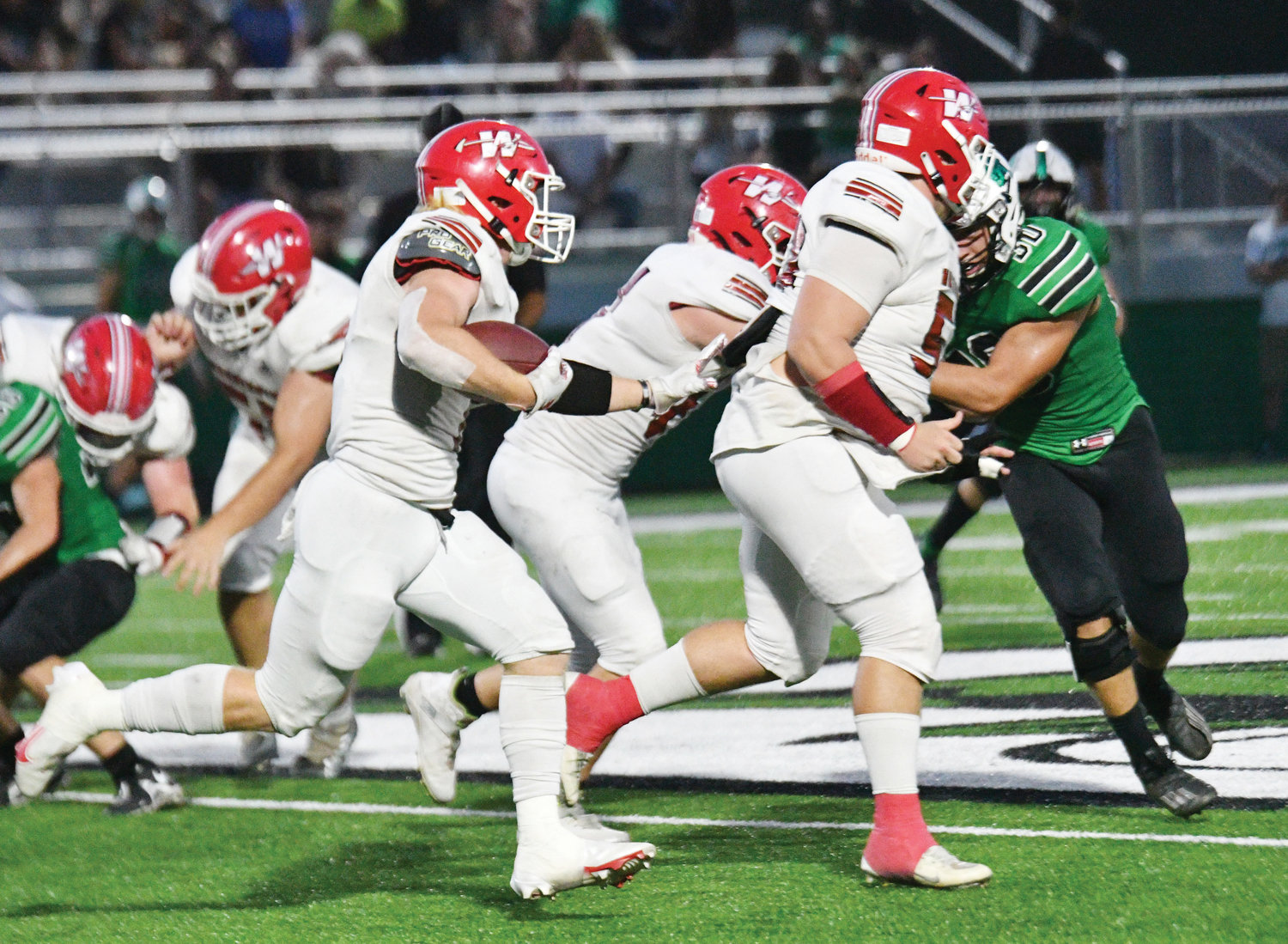 Washington senior Cole Scott (7) gets help from his senior buddy, Caleb Bruce (53), in the form of a lead blocker during the Warriors’ 33-14 win over Jones.
Ron Ladlee
Posted Thursday, September 15, 2022 9:00 am
John D. Montgomery

Despite playing uninspired football on both sides of the ball for the first half last Friday night at Jones, Washington’s No. 1 ranked Warriors turned a one point deficit at halftime into a 33-14 victory.

Led by junior linebacker Case Taylor’s 11 tackles, the Warrior defense pitched a shutout in the second half and the offense ramped up.

One of Taylor’s tackles was behind the line of scrimmage. Ben Vaughn had two tackles for a loss and finished with eight stops.

Jaxon Hendrix also had eight tackles in the victory over the Longhorns. Cole Beller and Marlon Moore both picked off interceptions in the contest. Beller also added five tackles and Moore finished with a pair stops.

“In the second half we showed a lot more physicality and started making plays,” Beller said. “We didn’t get to the quarterback but did make him hurry a couple of throws and we got the interceptions. Those really changed the game.

However, as the second half unfolded the Warriors started moving the football.

“We still struggled running the ball but were efficient enough running to move the sticks,” Beller said.

Junior quarterback Major Cantrell delivered both in the air and on the ground.

Cantrell, who was 11 of 18 for 144 yards, tossed a pair of touchdowns. He found Cooper Alexander on a 24 yard scoring strike and hit Nate Roberts later in the third period on a 35 yard touchdown pass.

Cole Scott scooted in from two yards out also in the third stanza.

Cantrell closed out the scoring in dramatic fashion scoring on a 99-yard cross country gallop in the fourth quarter.

The Warriors were backed up to their own end zone, facing third down.

“He executed the play to perfection,” the coach said. “It was a read option and we figured since we were on our own goal line they would be diving at our running back. So we gambled not giving it to the running back.

“We had run it earlier and they didn’t give up the edge,” Beller continued. “This time he pulled it. They took the dive play and he got to the edge and had great down field blocking by our wide receivers and running backs.”

It didn’t take the Warriors long to put up their first touchdown of the evening with Mason Singletary returning the opening kick off 85 yards to the house.

The Warriors are happy to have their bye week this Friday with the team pretty well battered.

“We have eight guys who will see limited or no contact this week and we have two or three more who will miss games the next week or two,” Beller said.

Head Coach Brad Beller nominated Major Cantrell as the Offensive Player of the Week. Cantrell rushed four times for 145 yards and a score and was 11 of 18 passing for 144 yards and two touchdowns.

The Defensive Player of the Week nomination went to Case Taylor, who registered 11 tackles, including one for a loss.

Hayden Milner got the nod as the Defensive Lineman of the Week. He made four tackles including one for a seven yard loss.

There was no nomination for Offensive Lineman of the Week.