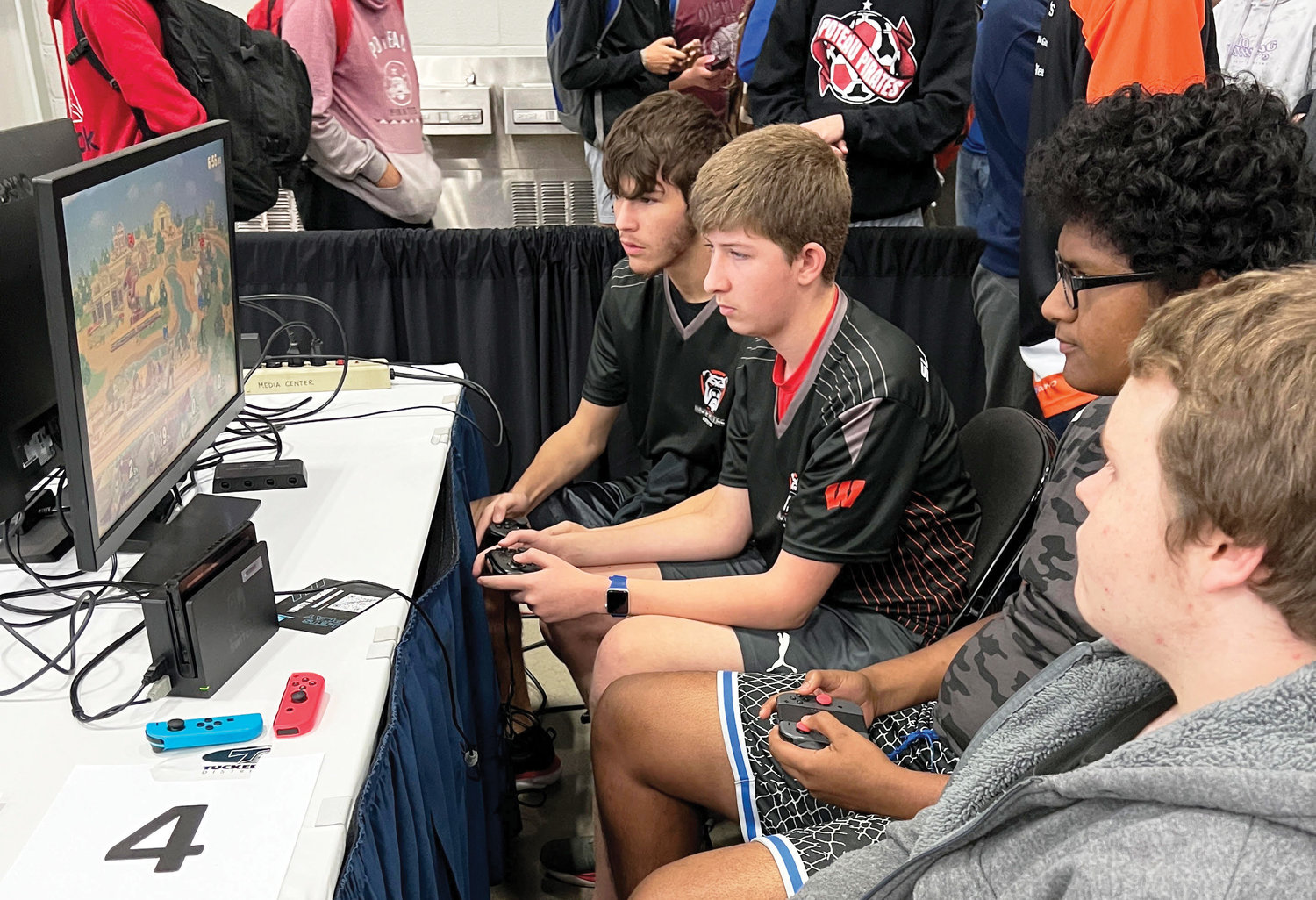 Two Wayne players in black are focused on the computer screen during a November 2 esports tournament in Tulsa.
Posted Thursday, November 17, 2022 9:00 am
Jeannie Grimes

There’s no field or court with hundreds of cheering fans.

But make no mistake. In esports, the competition is intense and wins are hard fought.

She points out that while playing video games competitively isn’t everyone’s idea of a sport, esports is “an actual competitive sport” in the eyes of the Oklahoma Secondary School Activities Association.

League of Legends is played 5-on-5. Gamers fight to reach their opponent’s camp and take the nexus.

“It’s like capture the flag,” Matthews said. “There’s a lot of strategy and it’s harder.”

Senior Corey Wattenbarger is the top laner in LOL. Loosely translated, he is the “damage guy.”

Wattenbarger has been a gamer four or five years. He first played LOL in middle school as a seventh grader.

Wayne’s LOL team is ranked 8th out of 11 statewide.

Super Smash Brothers is played 1-on-1. Matthews calls it a “kid-friendly fighting game.”

It’s probably the most popular game among Wayne’s team of gamers.

There are two Smash teams at Wayne. At the end of the fall 8-week season, the Black team was ranked 15th out of 102 teams in the state. The Orange team finished 35th out of 102.

There will be another 8-week season in the spring.

OSSAA sets up weekly contests across the state and a Class A school like Wayne may find itself playing against a 6A school.

Tanner Turner, a sophomore, has been a gamer for six years. Lukas Pack has been playing games “since I was a kid.”

Trinity Sites, a sophomore, started with video games about 10 years ago.

Sites and Turner specialize in Smash Brothers while Lukas’ expertise is Mario Kart.

Students can letter in esports and are included in the school’s athletic banquet.

That inclusion has been known to raise a few eyebrows among both students and adults.

But esporters are quick to point out they compete and win or lose.

“Why can’t this be a sport?” Lukas asked.

At the start of the school year, there are tryouts and tournaments. The best ranked players are named captains.

Matthews said esports interest is growing among the students.

A year ago, esports was new to Wayne. On a good day, there would be 8 or 9 gamers.

“He came in here and beat every single one of us,” Lukas said.

Sharp’s son is an esports gamer on the Mario Kart team.

The Oklahoma esports League governs some 6,000 high school students competing in esports across the state.

Matthews said there are esports gamers who turn pro. Some earn millions.

In fact esports spread from the professional ranks to college campuses to high schools.

Even in Oklahoma where football is king, high school esports boasts the most NIL (name, image and likeness) players, second only to football.

Wattenbarger is a drag racer who competes on the national level. After high school, he plans to go pro as a drag racer.

Lukas looks forward to college and a career as a computer programmer.

“If esports doesn’t work out, I may be a graphic designer,” Tanner said.

“I’ve always been a gamer,” she said.

So successful is esports at Wayne High School that Matthews is looking at introducing it at the middle school in the next two to three years.

For now, Matthews said, “We have some freshmen we are having to train.”