First century in the books 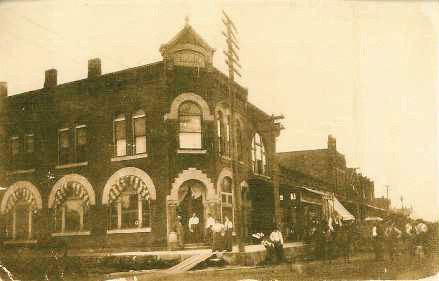 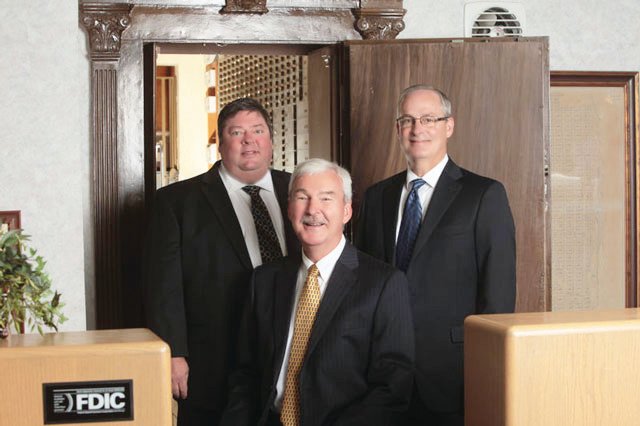 Steve Sherman, left, is the current president. Charlie Sherman, center, is board chairman and Donald Sherman II is the bank’s chief executive officer. 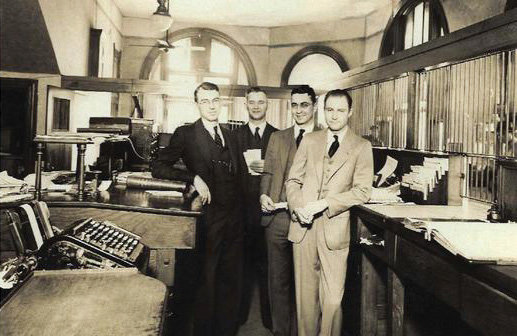 Earl Sherman, left, and his brother Neil, second from right, both joined the staff at McClain County National Bank in the 1930s. Both men would go on to serve as president and chairman of the board. Pictured with them are V.V. Haney, between the brothers, and Almer Ellison. 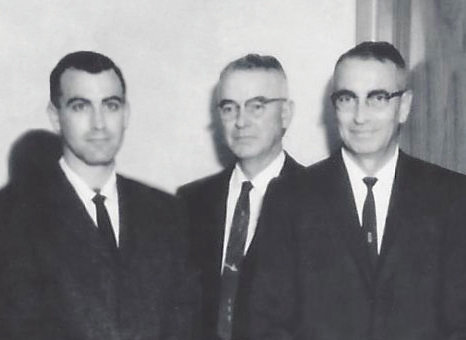 The Sherman family presence added a generation in the 1950s when Don Sherman, left, posed with Earl Sherman, center, and Neil Sherman.
Previous Next
Posted Thursday, March 3, 2022 9:00 am
The Purcell Register

McClain Bank will pull out all the stops on Tuesday when the  financial institution celebrates a century of business.

The historic landmark will be marked by street bashes at the main bank in Purcell, as well as branch locations in Norman and Noble.

Festivities at those locations will be from 11 a.m. to 2 p.m.

Food trucks will be on site and there will be prizes and giveaways.

The celebrations, bank officials say, are for everyone in the communities.

A history of the bank can be found on the bank’s webpage.

Main Street in Purcell was the site of the newly chartered McClain County National Bank.

Three men – John H. Perry, president; E.L. Sheets, vice president; and John H. Wells, cashier – were the only employees when the bank opened its doors on March 8, 1922. The new bank was formed with $30,000 in capital.

All the stock was owned by citizens in Purcell and the surrounding area.

Flash forward 100 years, and the bank has assets of more than $275 million and 55 employees are considered part of the bank family. If you doubt that, look no further than the longevity of those employees.

But that is getting ahead of the story.

In 1927, the bank purchased Chickasaw National Bank of Purcell.

Then in 1935 at the height of the Great Depression, Earl Sherman began working at the bank.

It was the start of a multi-generational  family legacy that has continued to the present.

Earl persuaded his brother, Neil, a Lexington teacher, to come work with him in 1936.

Also in 1936, the bank purchased First State Bank of Wayne. It added to its acquisitions in 1941 with the purchase of Byars State Bank.

By 1955, control of the bank was vested in the Wells and Sherman families.

Then in 1980, the Sherman family acquired complete control of McClain County National Bank.

When the FDIC closed First National Bank of Purcell and First State Bank of Lexington in 1990, McClain County National Bank purchased both from FDIC.

In 2001, the bank changed its name to McClain Bank in preparation of its presence in Norman and Cleveland County.

Neil followed his brother as president, serving as president until 1988. He died in 1990.

New generations of Shermans picked up the banking reins.

Steve is Neil’s grandson and Earl’s nephew. Born in Purcell, he was raised in Arkansas City, Kan., where his father, Jim, was transferred by the railroad. Steve graduated from Kansas State with a finance degree.

He moved back to Purcell and joined the bank in 1983. He is the current president.

Donald is Don’s son. He worked at the bank throughout high school and later earned an accounting degree.

He worked as a bank examiner and also worked for Price Waterhouse and Liberty National Bank before rejoining the family business as controller in 1992. He is presently chief executive officer.

Through the decades there have been good times and not-so-good times, Donald Sherman said.

“We’re thankful. We’ve been blessed by God and never had to close,” he said.

The Sherman family influence has been felt for 87 of the past 100 years and it’s not simply the longevity of employees as the loyalty of its customers.

It’s no accident that McClain bank counts generations of customers as one key strength.

“We have served several generations of the same families,” Sherman said. “It’s been an honor.”

McClain Bank probably isn’t the only century-old bank in Oklahoma. Still it weathered the Great Depression and the bank closures of the 1980s and 1990s.

One hundred years have brought changes too numerous to count.

The future is bright with promise, too.

“We have some really great employees we’ve groomed for leadership,”
Sherman said.