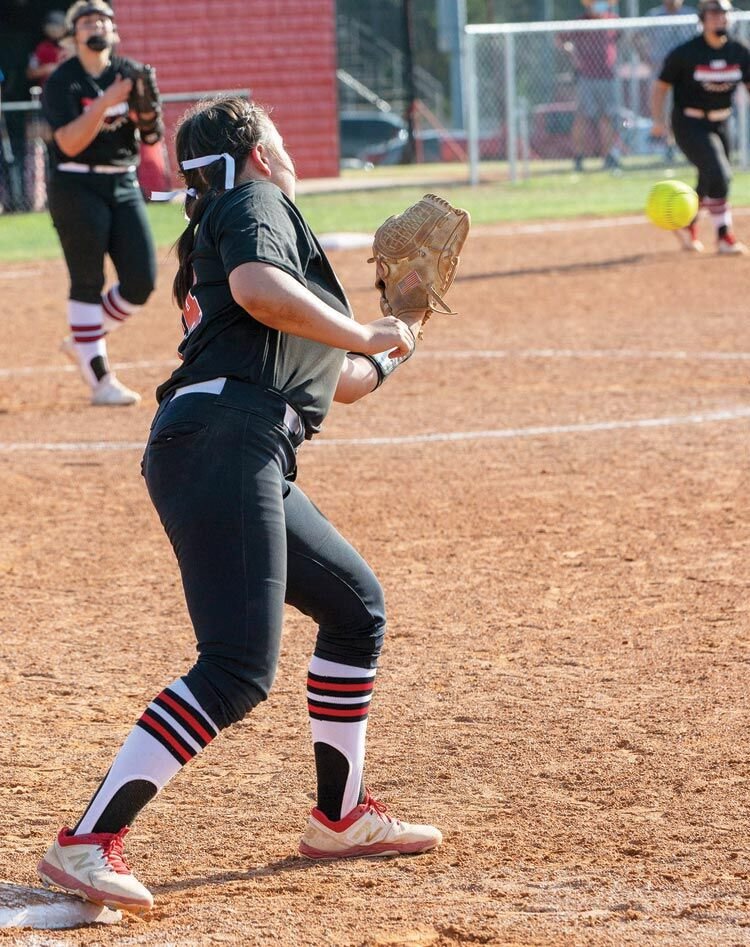 Missy Nimsey catches a ball at first base. Purcell is coming off a big 18-4 win against Bishop McGuinness and play at Tecumseh today (Thursday) at 5 p.m.

After Monday’s beat down of McGuinness, Purcell remained undefeated in District play at 3-0.

The Dragons punished the Irish 18-4.

Purcell went 1-2 in last weekend’s Murray County Bash edging Davis 3-2 before losing 4-0 against Washington and 5-2 at the hands of Cache.

“We knew going in it was going to be a tough tournament,” head coach Sarah Jones said. “We needed to see better pitching and we did.”

Jones said her club hit well against Davis but just can’t seem to string hits together.

Purcell and Davis were forced into using the International Tie Breaker and the Dragons prevailed.

“Our defense in the bottom of the inning was spectacular to win the game,” the coach said.

Maggie Place did a job on Purcell in the circle for Washington limiting the Dragons to one hit by Fleming.

“We flat out didn’t hit the ball,” Jones said. “She is a great pitcher and is different than we have seen. We couldn’t adjust at the plate.

On the flip side, Washington only had three hits off Fleming.

Jones said a pair of walks and an error led to Washington’s first two runs.

“We did some positive things as well. Our mentality was good and we never let the game get the best of us. We stayed even keel.

“Brook pitched two really good games that day,” the coach continued. “Our defense is staying solid. We have an error every once in a while which is going to happen. I couldn’t be more pleased with our defense.”

“Adjusting at the plate and doing it quickly is a struggle for us right now,” Jones said. “We need to continue positive talk and some out ready to compete every game. Cache was a game you can learn from and be glad it wasn’t a district game. Just flush it and forget it.”

Purcell is now 5-3 and 3-0 in district play with district games at home with Bethel Tuesday and at Tecumseh  today (Thursday).

Purcell is at Harrah next Monday and home to host AmPo Tuesday.