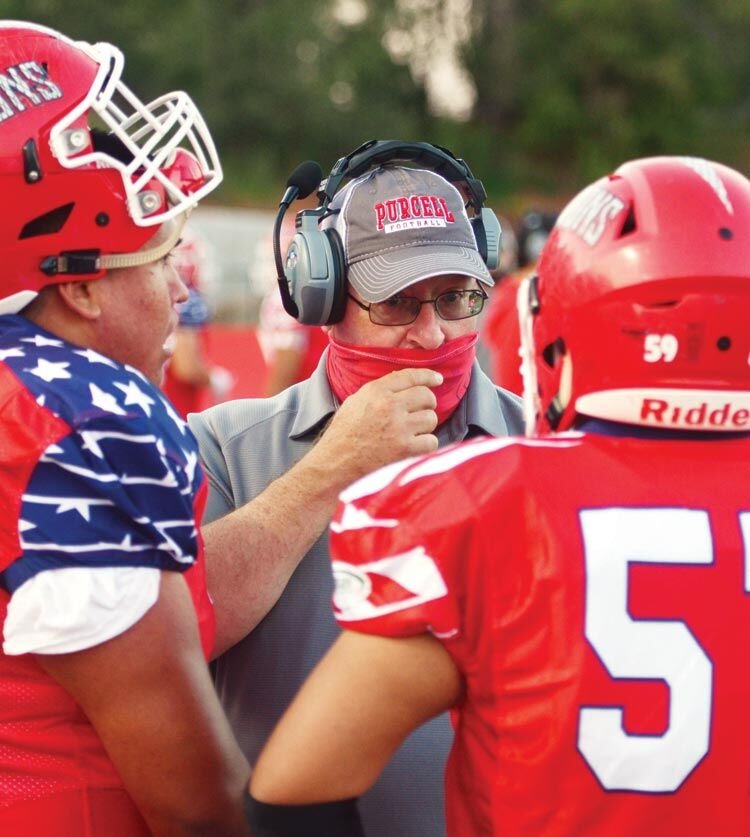 Purcell coach Kurt Gray talks to Jaysen Shea (72) and Tavian Engert (57) during their game against Washington. 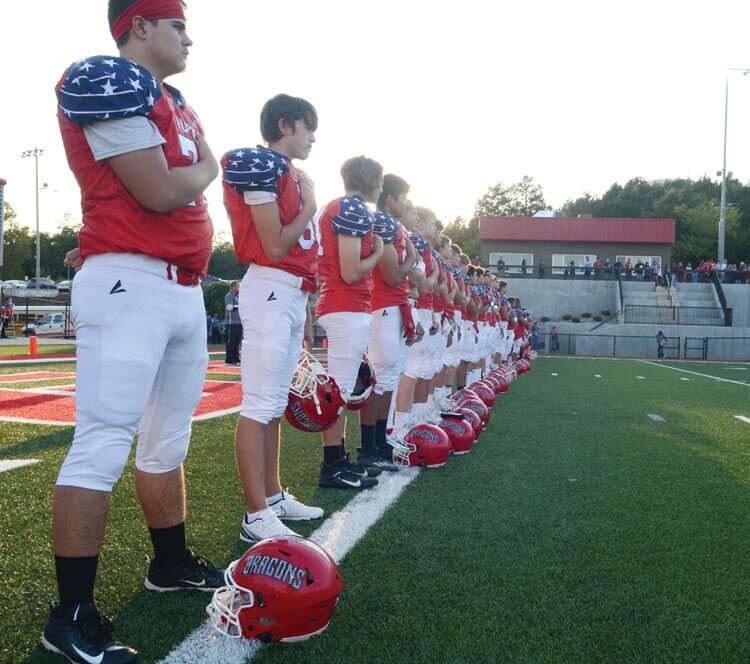 The Purcell Dragons stand for the “Star Bangled Banner” Friday night during the Warriors for Freedom football game between Purcell and Washington. 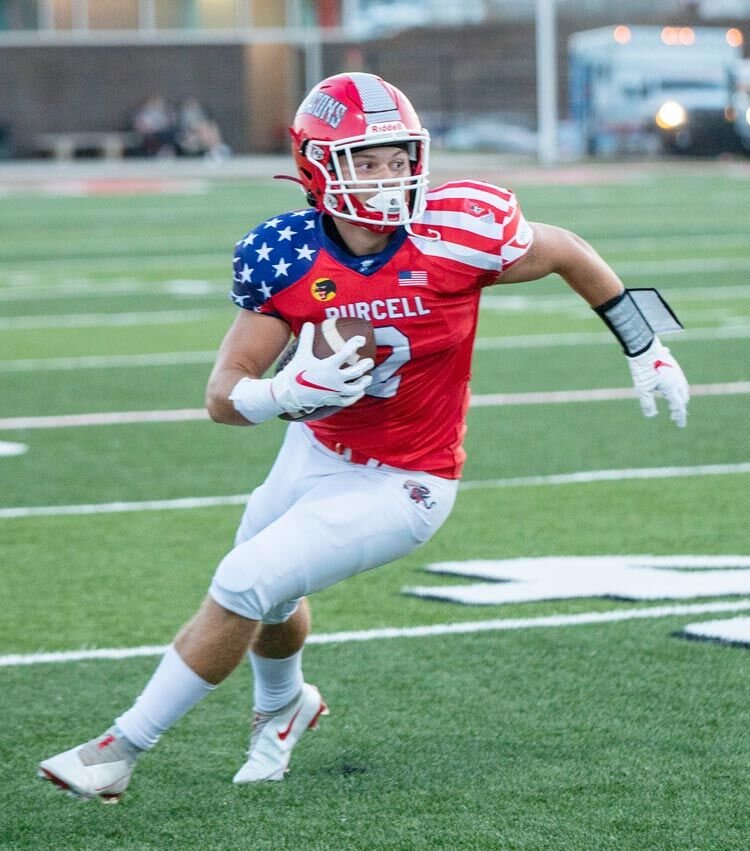 Zicorrie Davis gets up field with the football Friday night. Davis and the Dragons were defeated 40-27 by Washington. 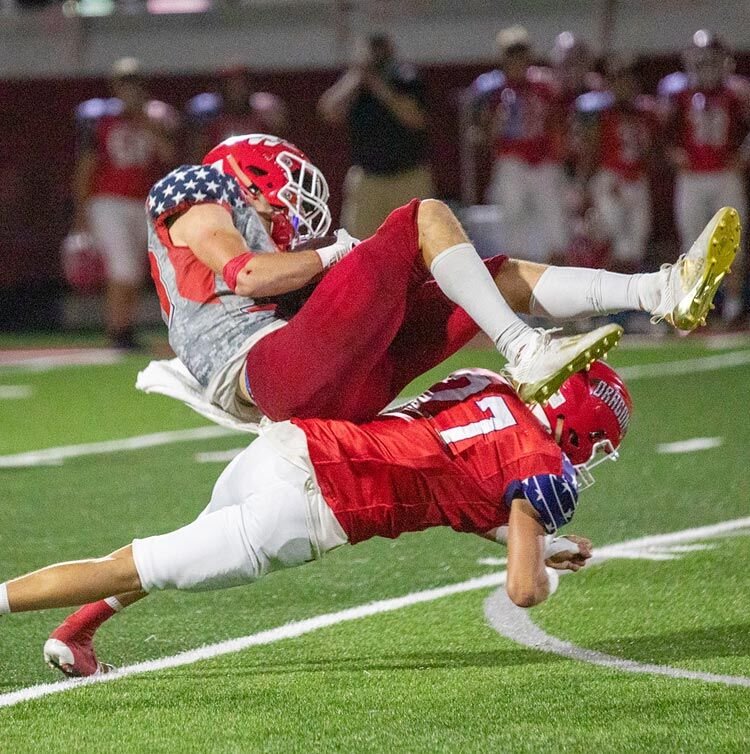 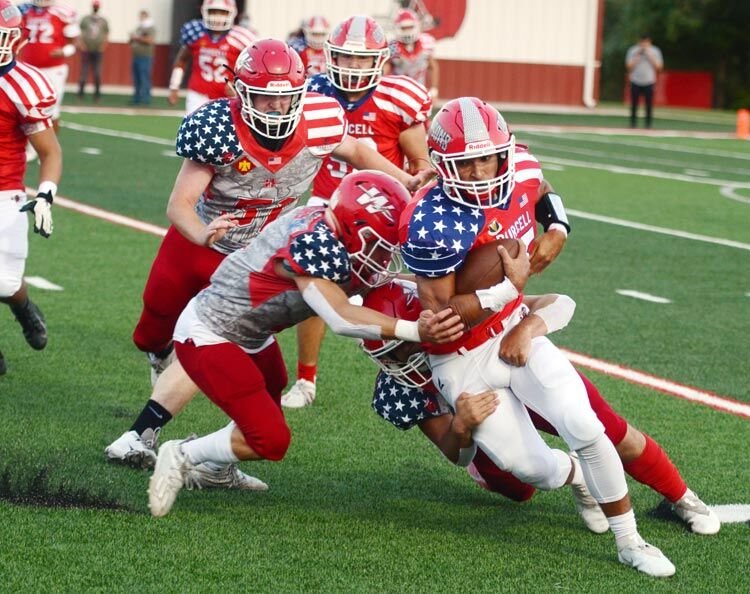 Sam Wofford fights for yards against the Washington defense on Friday. 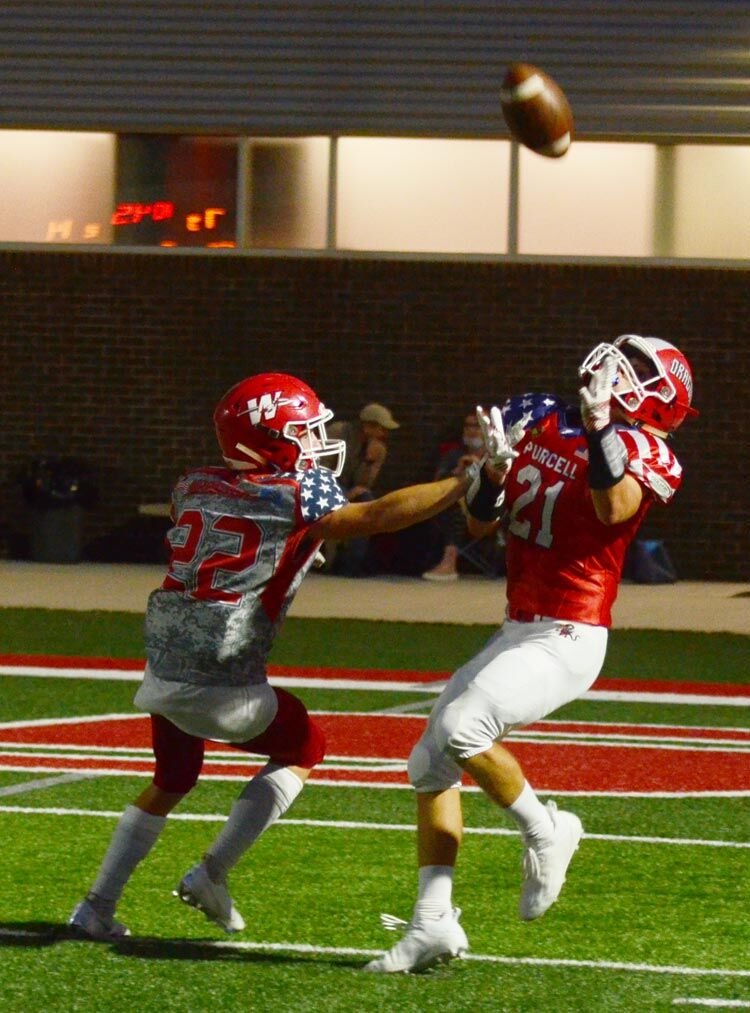 Titus Mason makes a tough catch along the boundary to get the Dragons into the Red Zone Friday night. 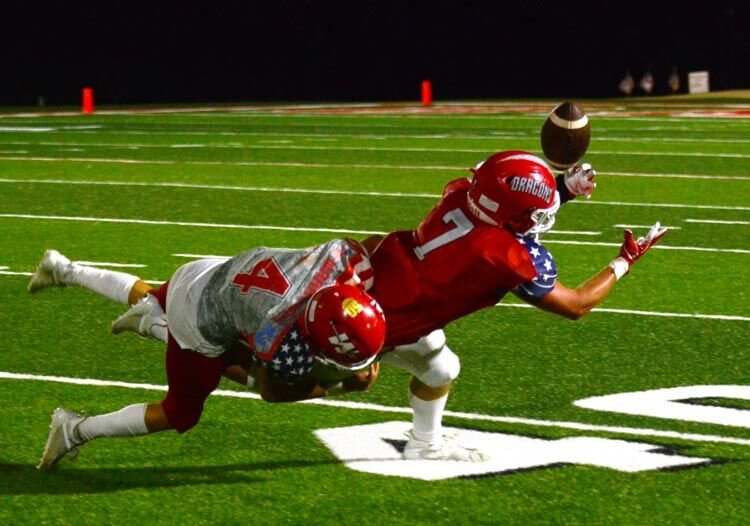 Creed Smith hauled in a pass from Kody Kroth Friday night, but not before putting on a juggling act on the way to the ground. 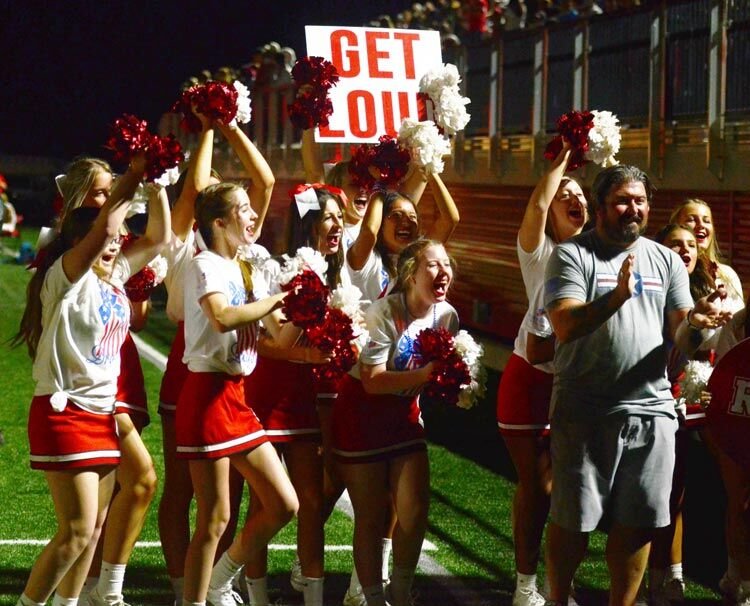 The Purcell cheerleaders kept the Dragon Spirit high during the Warriors for Freedom game between Purcell and Washington Friday night. 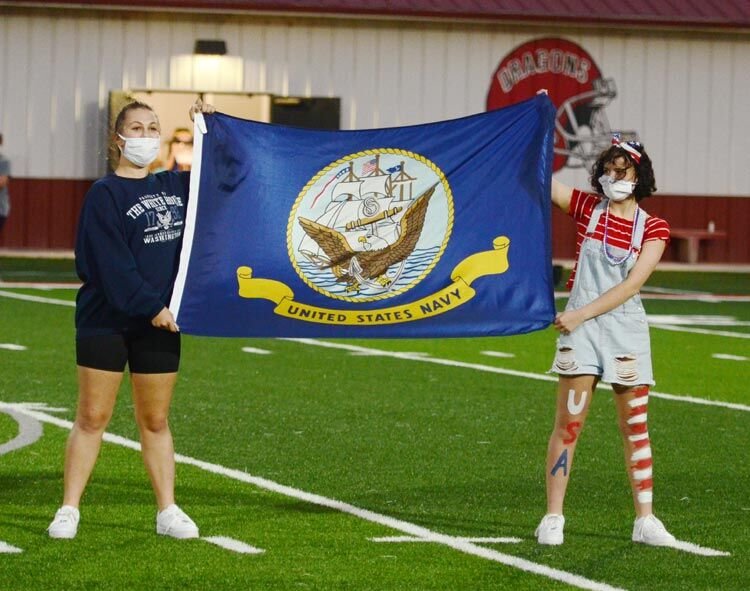 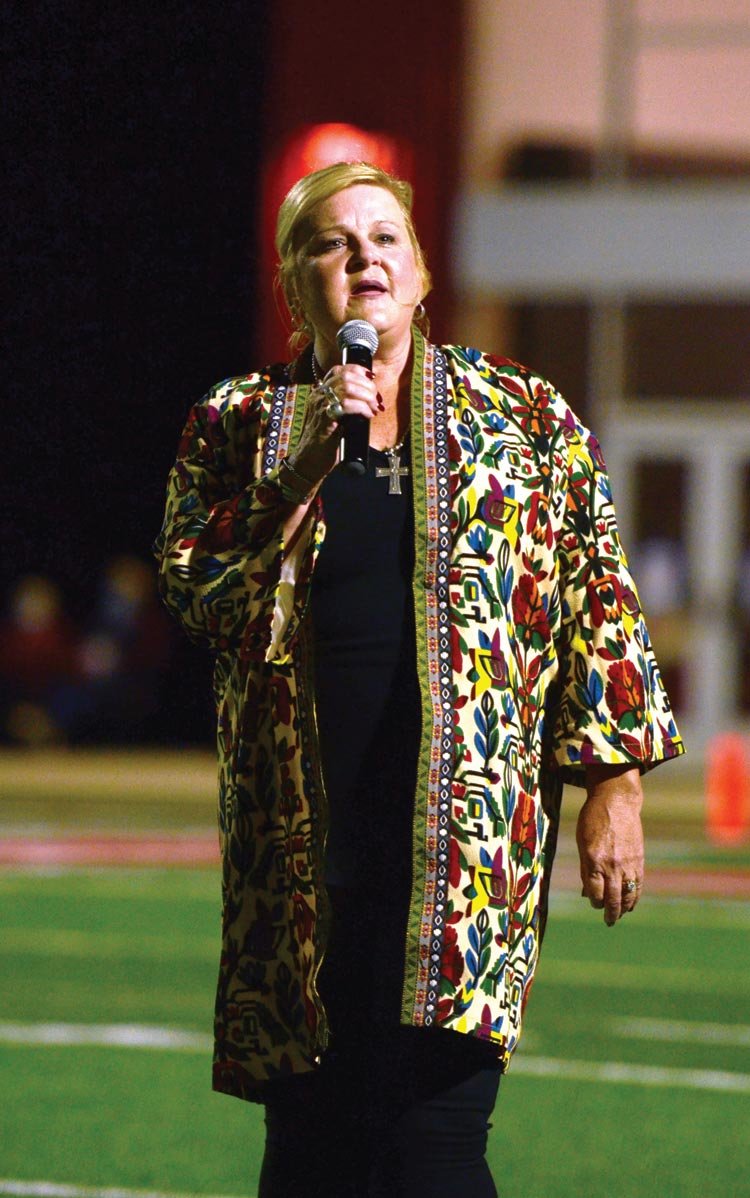 Theresa Cox sings “God Bless America” Friday night as part of the Warriors for Freedom game between Purcell and Washington.

Purcell took No. 3 Washington to within seven points into the fourth quarter but eventually lost to the Warriors at Conger Field last Friday, 40-27.

Twice the Dragons drove to inside the Warrior 10-yard line both times coming up with no points.

One drive ended in a fumble and the other in a botched field goal attempt.

Browning got the Purcell scoring started grabbing a 42 yard pass off the arm of quarterback Kody Kroth.

Ryker Fink scored on a three yard burst and Titus Mason found the end zone on the receiving end of a 30 yard strike by Kroth.

That duo hooked up again for the final Dragon score of the night a 38 yard pass and catch to pay dirt.

“I think we all played well for the most part,” Scott said. “We had our chances. They are a good team. They don’t make mistakes and you can’t make mistakes when you play them. That’s a credit to their coaching staff.”

“It was one of those deals where we’ve got to get better and be able to finish and take care of the ball. We couldn’t even kick a field goal.”

Scott was quick to point out stellar defensive play from several of his Dragons.

“Jaysen Shea played well,” he said. “So did Mateo Ramirez, Sam Wofford and Creed Smith,” Scott said. “Our two corners Mojo Browning and Titus Mason shut down their receivers for the most part. I think they had two catches each.”

Up next for the Dragons is a road trip to CHA for a 7 p.m. kickoff Friday.

The Royals are 2-2 on the season and will operate out of a one-back spread on offense and a 3-3 stack on defense.

“They throw it a lot,” Scott said of the Royals. “And defensively they’ll probably use a 3-4 against us.”

Scott said the key it coming out ready to play from the opening whistle.

“We’re not out of this,” Scott said defiantly. “If we run the table here we could host a first round playoff game. We’ve just got to play well.”

Browning hauled in six pass receptions for 196 yards and one touchdown.

Nominated as the Offensive Lineman of the Week was Johnny Marquez. He graded out at 90 percent last Friday night.

Scott nominated Creed Smith as the Defensive Player of the Week. Smith made 15 tackles against the Warriors last Friday.

Getting the nod as Defensive Lineman of the Week was Mateo Ramirez, who had 10 tackles from his defensive end position.