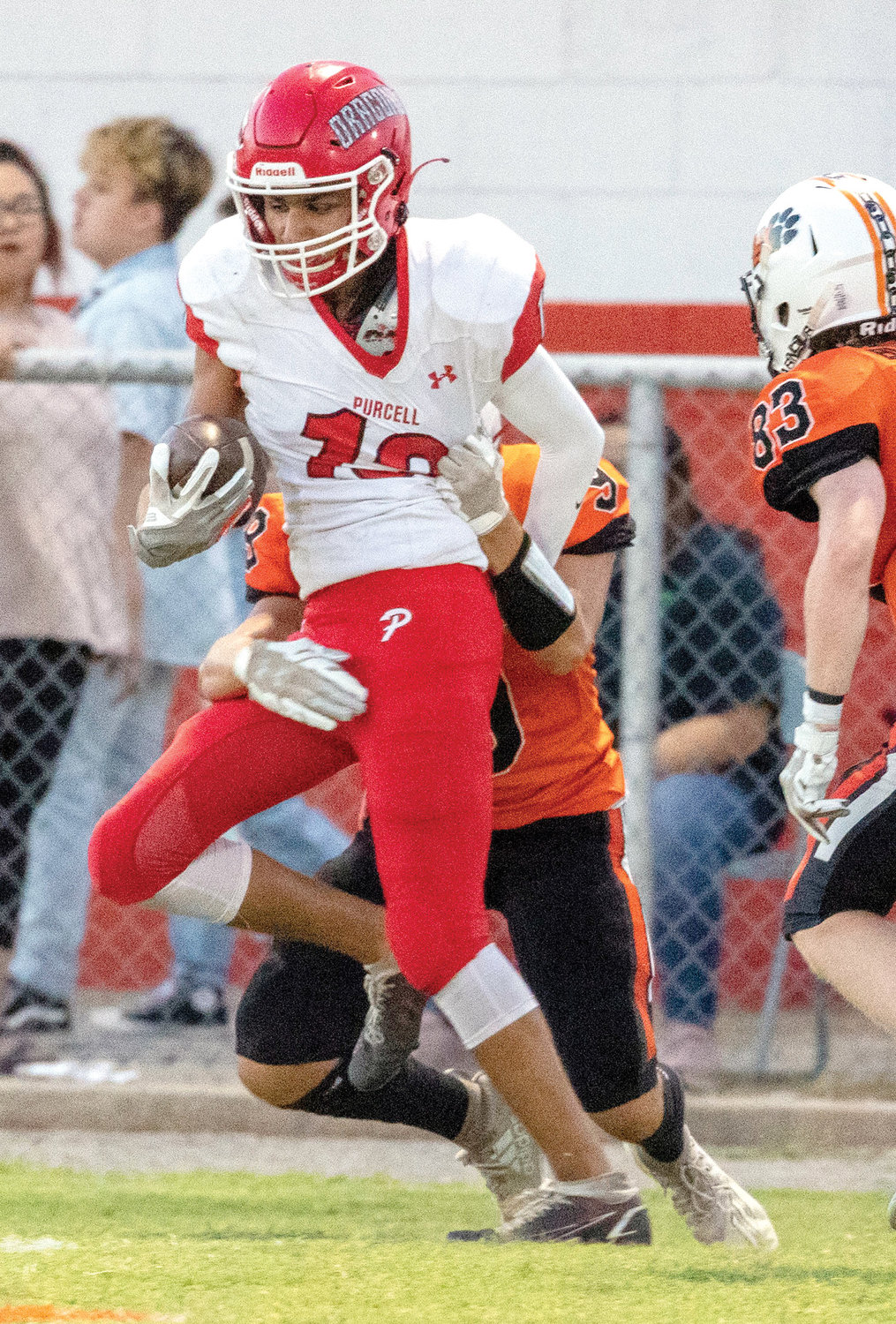 Purcell senior Jose Ochoa slips from the grasp of a Lexington defender during the Dragons’ 51-6 win over the Bulldogs. Ochoa had a touchdown in the game.
Greg Gaston - double g images 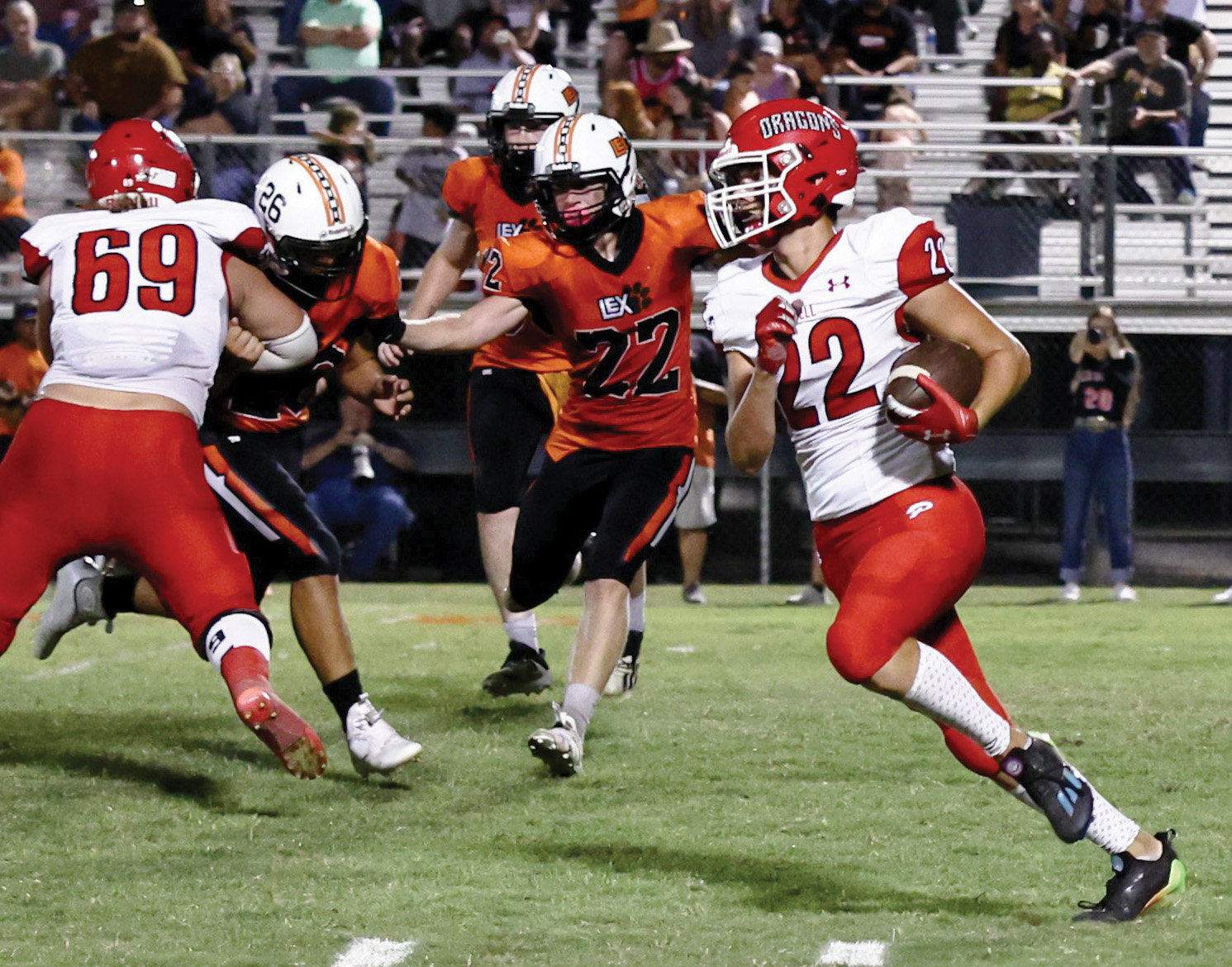 Purcell racked up 341 yards rushing and 302 passing in a 51-6 victory at Lexington last Friday night.

Sophomore Boston Knowles lit up the Bulldogs for 202 yards on the ground finding the end zone on runs of eight and 17 yards in the opening quarter. He scored on a 26 yard scamper in the third quarter when Purcell pulled away with another 23 points to add to their 21-7 halftime margin.

Later in the third stanza, Knowles scored his fourth touchdown of the night snagging a 60-yard pass off the arm of Galyean.

Galyean tossed a 35-yard strike to junior Jett Tyler for the third touchdown in the first half.

Quarterback Brody Galyean was an efficient 12-16 with three touchdowns and one interception. His longest touchdown pass completion was 66 yards to fellow senior Jose Ochoa.

Sophomore Kash Guthmueller broke free for a 77 yard touchdown jaunt in the fourth period to close out the Purcell scoring.

Anytime an offense bundles up 643 total yards the big eaters up front have done their job.

He was talking about the play of Tavian Engert, Rowan Ardery, Carter Goldston, Jace Clary and Brendan Bacon.

Turnovers and penalties marred what was a dominating performance.

Purcell lost three fumbles and threw an interception and dropped a punt.

“Once he settled down Galyean did a good job,” Scott said. “The running backs ran well and the receivers caught the ball well.”

Five different receivers caught balls, including four out of the offensive backfield. Knowles and Lincoln Eubank led the receiving corps with three catches each while Ochoa, Tyler and Paysen Purcell stabbed two each.

Junior Ryker Fink led the stingy Purcell defense with 14 tackles and had a safety. As a team, Purcell held Lexington to 156 total yards, 59 on the ground.

Guthmueller finished with nine tackles while Payson Purcell and Adam Edelman each made eight stops.

“The defense played well,” Scott said. They got after ‘em and ran to the ball well. There are still some things to work on and get better.

“Week to week we’re getting better defensively. We’re in district play now and we still have got to clean up turnovers and we’re still getting quite a few penalties.

“We’ve go to take care of that or it will hurt us down the road. We’ve just got to play cleaner,” the coach said.

Up next for the Dragons is a 7 p.m. kick off to the 2022 homecoming tilt with Crooked Oak.

The Ruf-Nex are coming off their first victory of the season, a 14-7 upset of Wayne last Friday night.

The Ruf-Nex Wing T offense is under the leadership of outstanding quarterback Daevion Hill, who is 6-3 and 185 pounds.

“We’ve got to go out and play a clean game and take care of business.

“We’ve got to contain their quarterback and not let him scramble around and get to the sideline.”

“Overall, they are better than they have been in the past,” Scott reports.

The Queen coronation begins at 6:30 p.m. at Conger Field.

Purcell Head Coach Tracy Scott nominated Brody Holder as the Defensive Lineman of the Week. He made four tackles against Lexington.

Ryker Fink got the nod as the defensive Player of the Week for his 14 tackle performance in the victory over Lexington. “He played really well,” Scott said.

The Offensive Player of the Week nominee is Brody Galyean, who was 12-16 passing for 302 yards and three touchdowns. He also rushed the pigskin eight times for 45 yards.

The Offensive Lineman of the Week nomination went to Jace Clary, who graded out at 97 percent against Lexington.