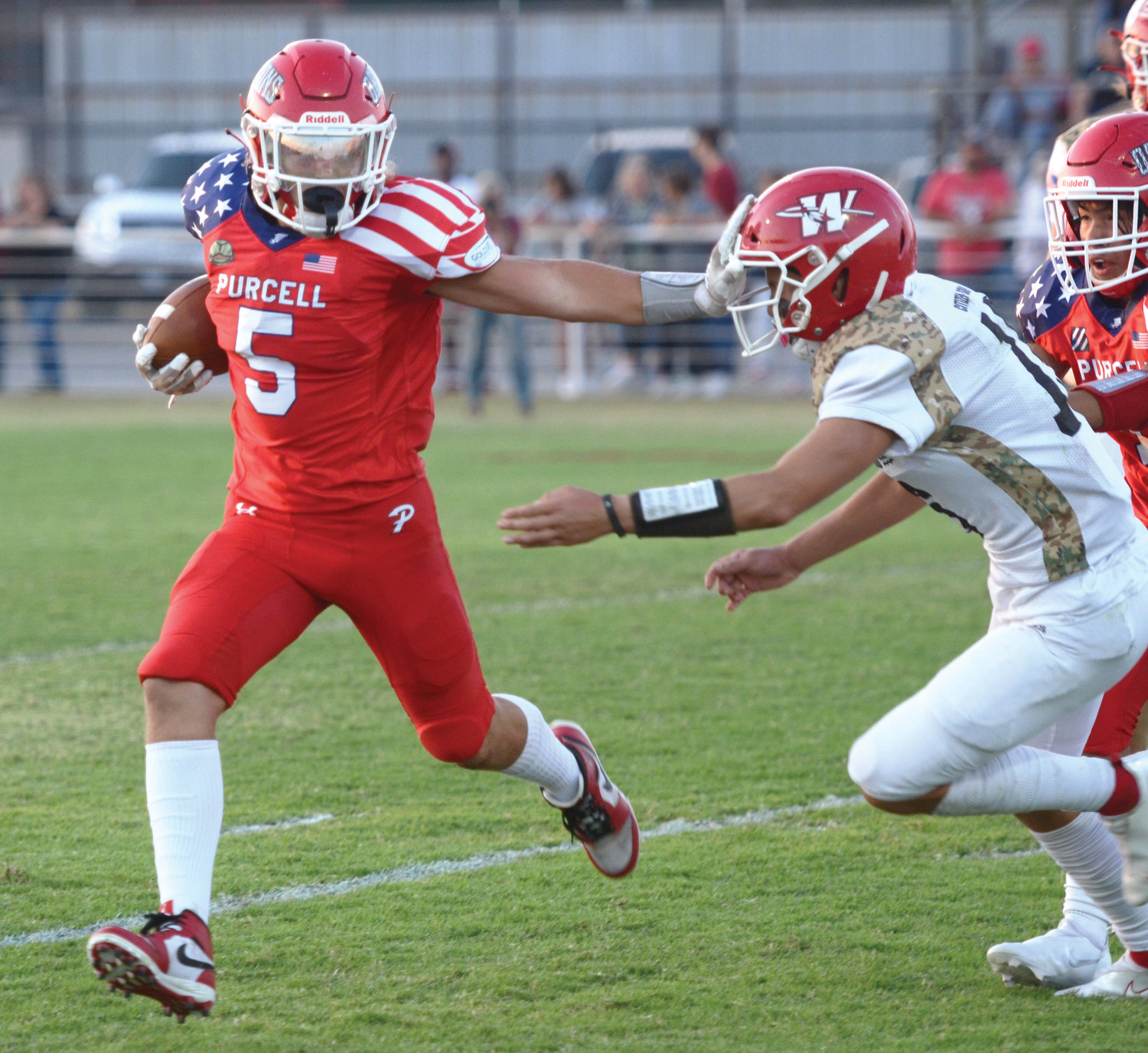 Purcell sophomore Ryker Fink throws a stiff arm on a Washington defender Friday night. Fink found the end zone with a one yard plunge in the fourth quarter of the game. He finished with 52 yards rushing. Purcell was defeated 42-13.
John Denny Montgomery 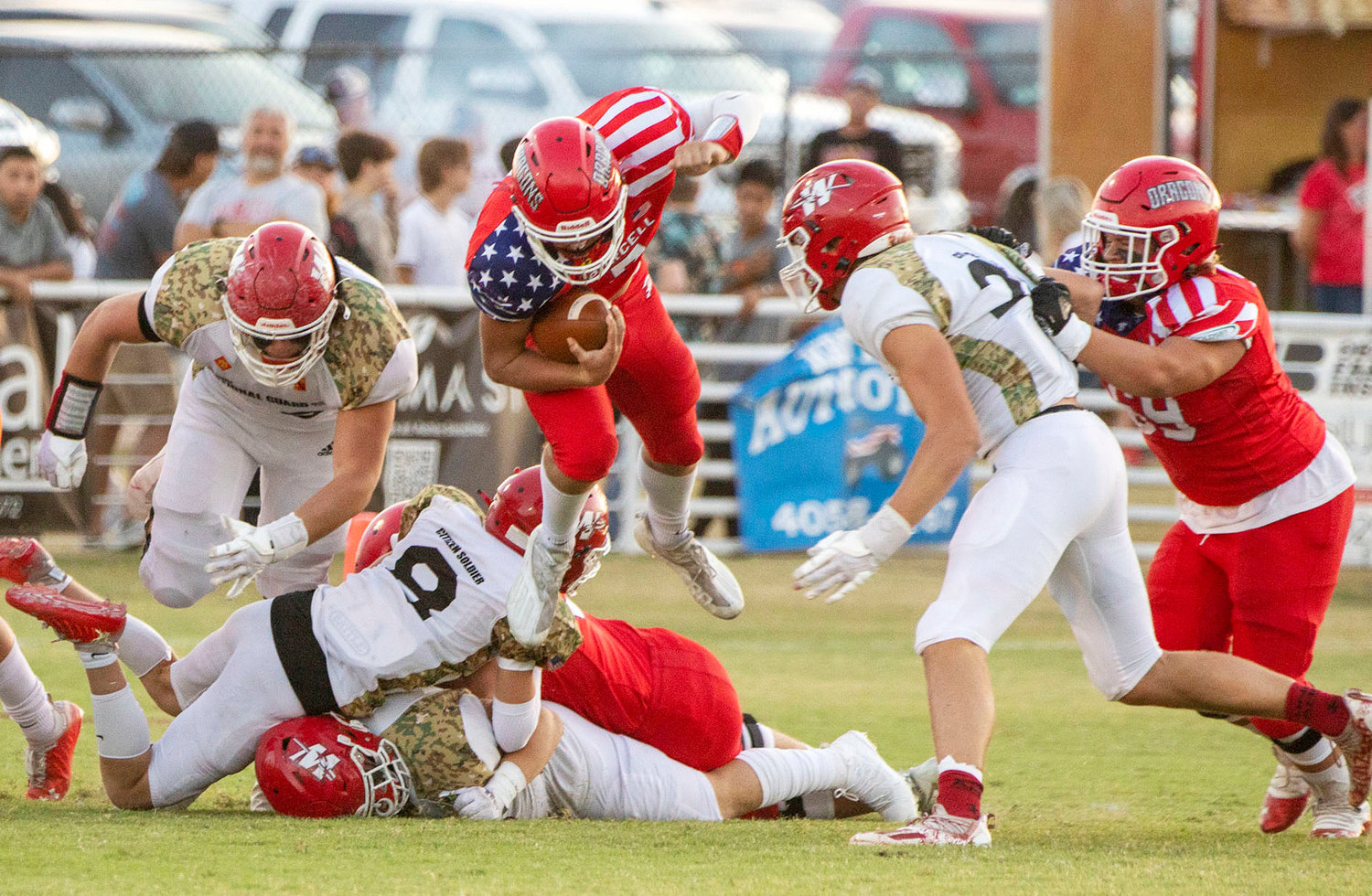 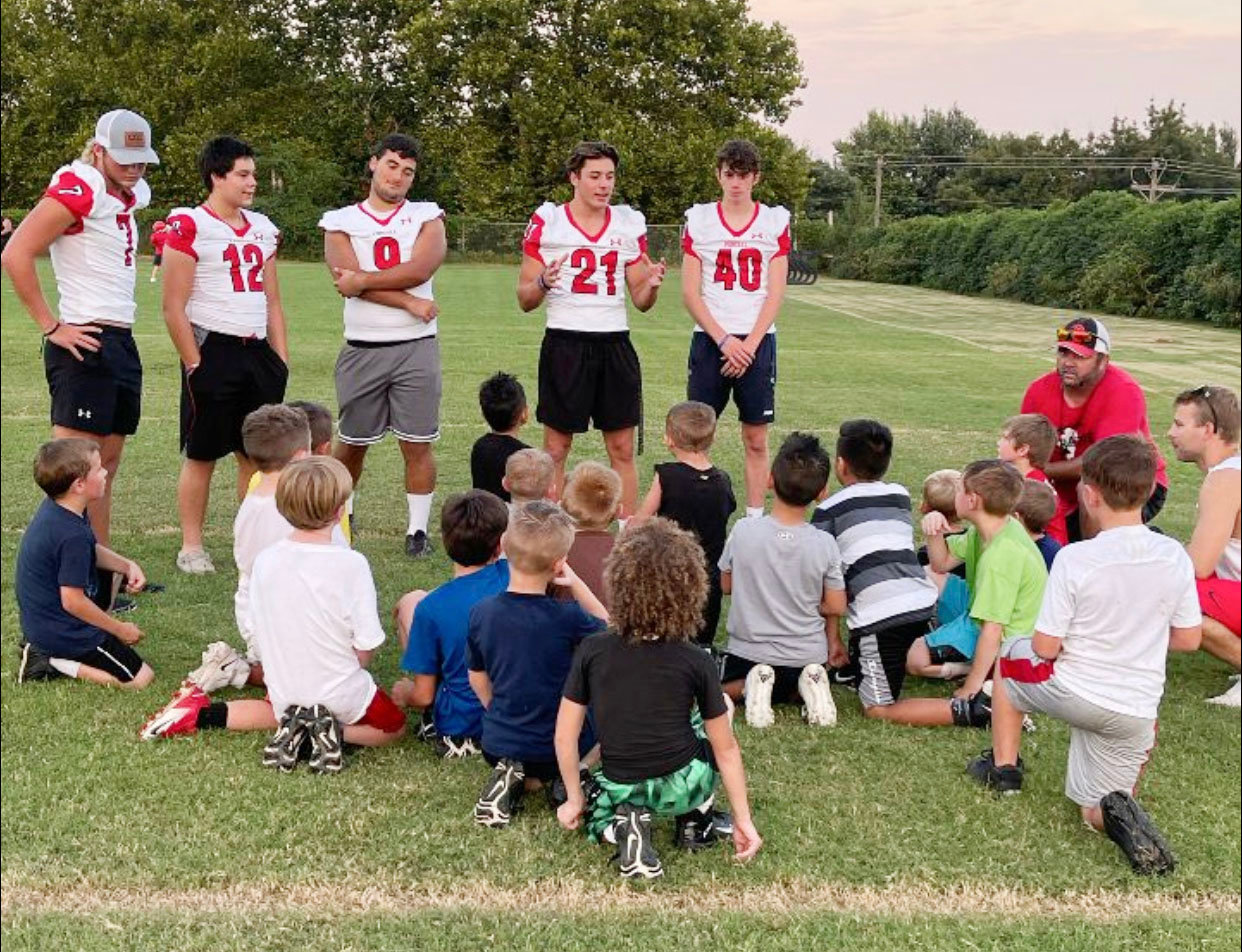 The Purcell 7U football team recently listened to a pep talk from Purcell varsity football players Creed Smith (7), Zicorrie Davis (12), Brodrick Smith (9), Titus Mason (21) and Xander Springael (40). The 7U team is 3-1 this season and are ranked No. 1 in the league. Their next game is October 2 at home against Marlow.
Previous Next
Posted Thursday, September 30, 2021 9:00 am
John D. Montgomery

Christian Heritage Academy’s Crusaders will be in Purcell Friday night for the 2021 homecoming contest with the Dragons. Kickoff is slated for 7 p.m. with the Queen Coronation set for 6:30 p.m. weather permitting.

Purcell will be out to avenge last year’s 34-28 loss to the Crusaders.

One key for the Dragons will be keeping CHA’s quarterback bottled up.

“He throws decent but scrambles,” head coach Tracy Scott reports. “We will have to keep him in the pocket. They have tall receivers like Washington but they don’t run like Washington’s do.”

The Crusaders operate out of a spread formation on offense and run the 3-3 stack on defense.

“They will throw in some double tight end looks and try to run but they want to be a passing team,” Scott said. “It’s a game we need to win.

“We gotta take care of business. I’m proud of their effort. I like this football team. We have a chance to win every game we play from here on out. A good chance. We have to continue to give effort and I think we will.

“They were ready to play against Washington and got after it.”

Outside of giving up the big pass plays Purcell Head Coach Tracy Scott thought his team played pretty well against Washington, who eventually pinned a 42-13 loss on the Dragons.

The Dragons limited the Warriors to 126 yards on the ground.

“We pretty much did a good job on the rushing game,” he said. “They just big-played us.”

“They’re (Washington) are really good,” Scott continued. “They give you match up problems with their two big tall receivers. Well, actually they have three.”

“Both of our outside linebackers played well,” Scott said. “Ochoa had seven tackles and batted down two passes. At corner, Austin Burton played well. He had a tough draw (guarding Kobe Scott) but he had eight tackles and broke up a pass. He got after it and competed.

Smith led the team with 11 tackles. Right on his heels was Davis with 10 stops. Joining Burton with eight tackles was Brody Holder while Ochoa, Creed Smith and Kash Guthmueller all registered seven stops.

On offense Scott said Smith ran the ball well from his quarterback position and his three running backs played well.

Smith finished the game with 131 yards rushing and a one-yard touchdown in the first quarter. Ryker Fink also found the end zone with a one yard plunge in the fourth quarter. He finished with 52 yards rushing while Payson Purcell added another 18 yards on the ground.

As a team, Purcell rushed for 201 yards for 297 yards of total offense.

“We saw good things from Payson Purcell, Ryker Fink and Creed. He is doing a good job for us.”

Smith also passed for another 96 yards.

Purcell Head Coach Tracy Scott nominated Brodrick Smith as the Defensive Player of the Week. He made 11 tackles against Washington last Friday night.

In the Defensive Line, Brody Holder was the nominee with eight tackles.

Getting the nod as the Offensive Lineman of the Week was Carter Goldston, who graded out at 85 percent.

There was no nominee for Offensive Player of the Week.