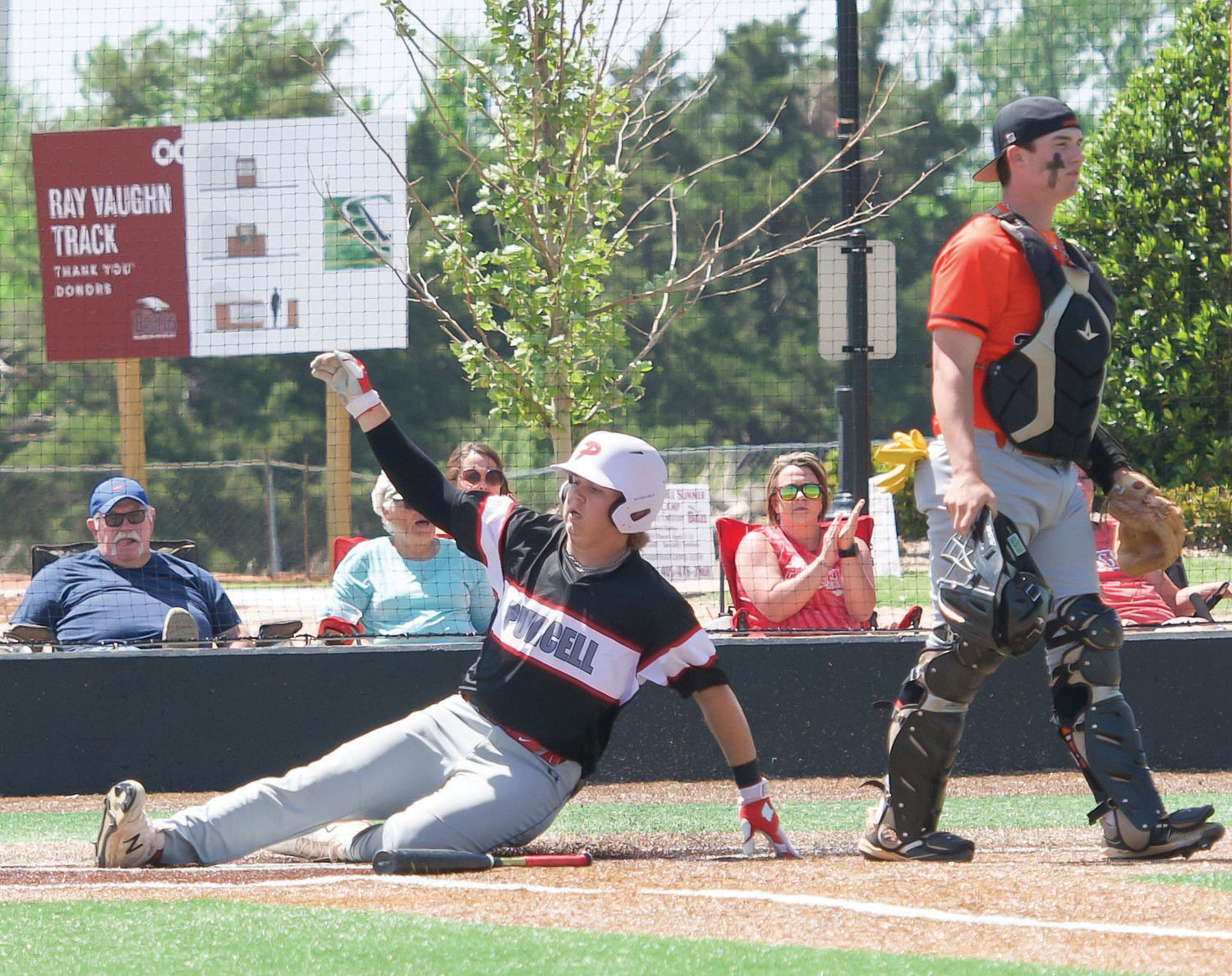 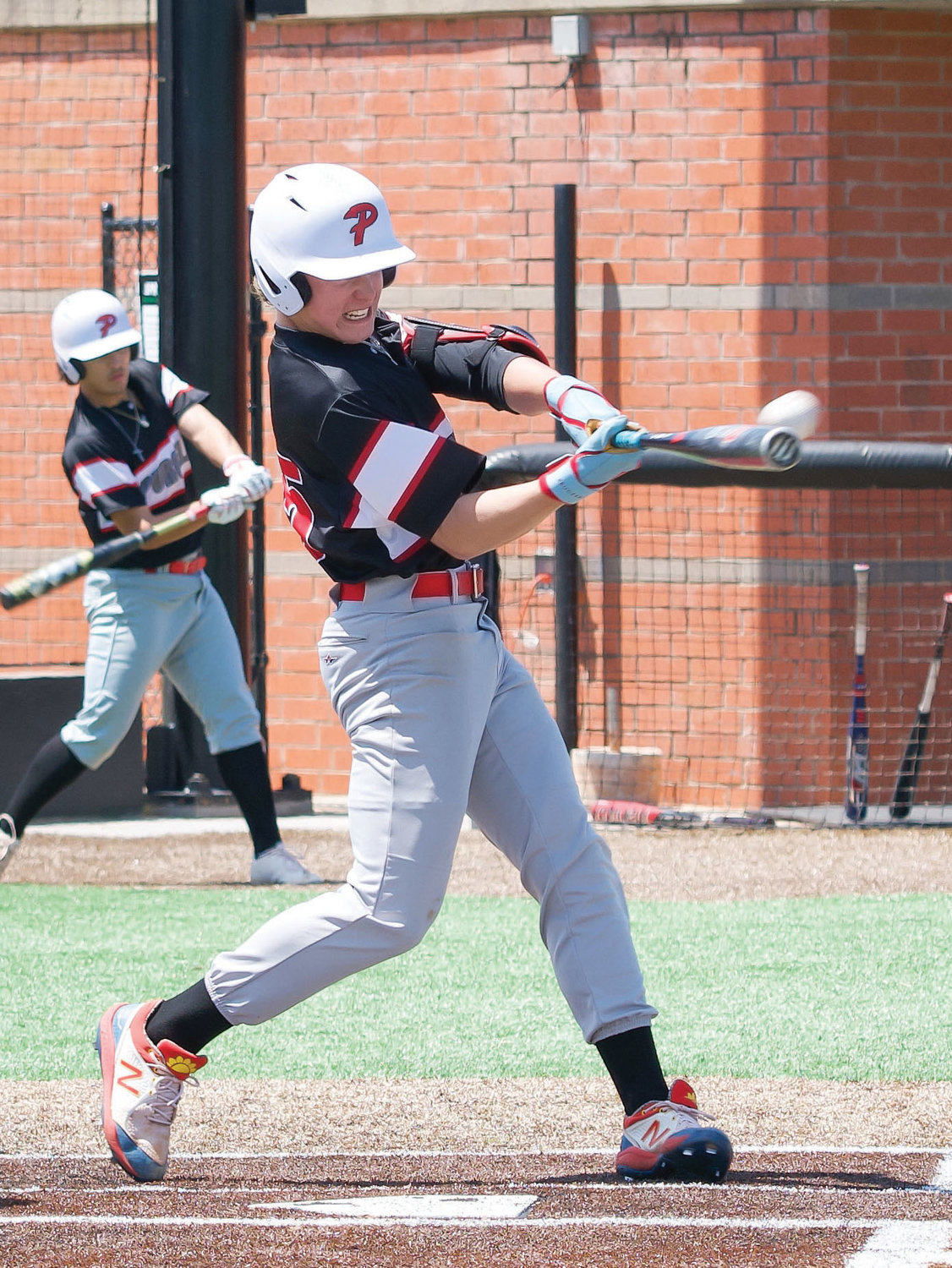 Purcell freshman Boston Knowles barrels up a ball during the Regional baseball tournament. The Dragons were put out of the tournament on Monday by OCS under auspicious circumstances.
Kristy Schrader
Previous Next
Posted Thursday, May 12, 2022 9:00 am
John D. Montgomery

Purcell’s bid to make the State Baseball Tournament came up short when Oklahoma Christian Saints knocked them out in the Regional finals Monday 10-0.

Head Coach Cole Sharp said the Dragons just couldn’t get their bats going in that game.

“Their pitcher did a good job of keeping us off balance,” Sharp said.

Purcell edged the Saints Saturday in the bottom of the seventh on a walk-off single by Smith to win 4-3 forcing the if necessary game.

Purcell was ready to play the game last Saturday per the posted OSSAA Regional tournament rules but for some reason the game was delayed until Monday.

In addition to Smith’s thrilling hit in the seventh, Sharp also got hits from Willis, Hayden Harp, Idlett, Bloodworth and Knowles.

“Tucker did a fantastic job and let his defense play behind him. They hit him but we played some great defense.

“We had two double plays and we got a big double play in the top of the seventh to end the inning and set us up for the win,” Sharp said.

“Creed got the big walk-off single to score Nate from second. That was a fun game to coach with a high emotional atmosphere.

“Our kids were really excited. That was a big win for our program,” the coach said.

Earlier in the day Purcell run-ruled Lindsay 12-2 scoring 10 runs in the bottom of the fourth including a three-run dinger by Smith.

Idlett was 3-4 with three RBIs, Bloodworth was 2-3 with an RBI. Willis and Parker Page both had an RBI.

Willis pocketed the victory on the mound with relief in the seventh by Logan Roberts.

“Nate did a tremendous job controlling their hitters, keeping them off balance,” Sharp said. “Creed and Boston both had home runs. Zach Idlett had a big game as well. Overall, that was one of our best hitting games of the year and it paid off for us to advance to the Regional finals.”

Page was the winning pitcher in the first victory over Lindsay. He scattered nine hits and struck out three.

“Parker did a great job all game in commanding the strike zone,” Sharp said. “I like the focus he had on the mound.

“We hit the ball pretty well. You are always glad to get that first victory in Regionals.”

Willis had a triple in a 2-3 performance while Idlett, Harp, Knowles and Bloodworth all had hits.

“I was proud of the way our guys came out and played throughout the playoffs,” Sharp said. “We couldn’t be more proud of a group of young men who came together and stuck with the process earlier in the year.

“We played some great baseball late in the season winning 13 of our last 17 against some great teams throughout the season and were just one game away from State,” Sharp said.

“This group of seniors set the foundation here for the younger guys and the years to come to keep this thing rolling,” the coach continued.

“It will be hard to replace these guys but we also had a lot of young guys step up. The future is bright for us,” Sharp concluded.