Will host Comanche on Thursday night due to forecast 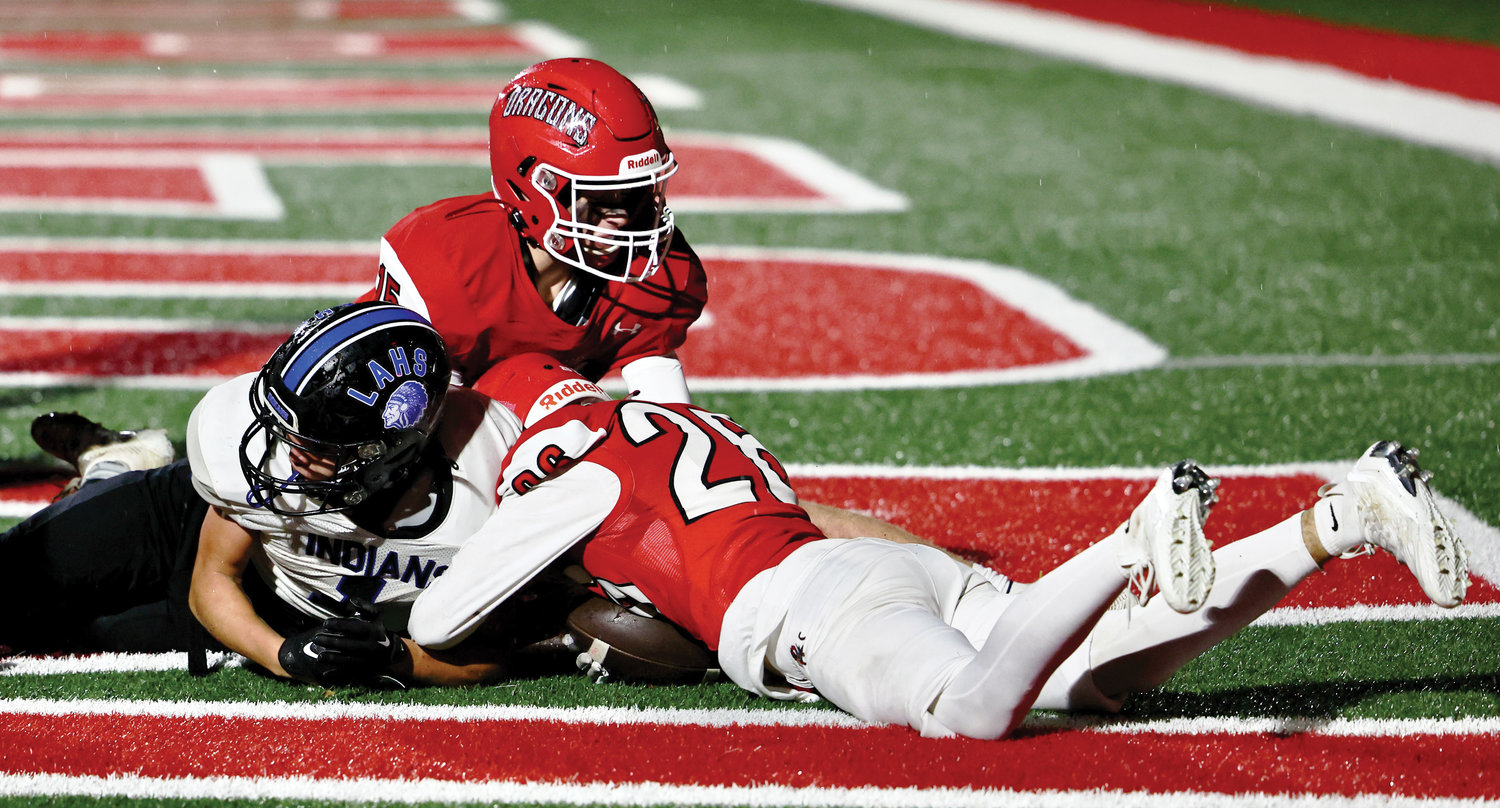 Purcell junior Jett Tyler (26) holds onto the ball in the endzone for a Dragon touchdown Friday night during their 48-6 win over Little Axe.
Janet Moore 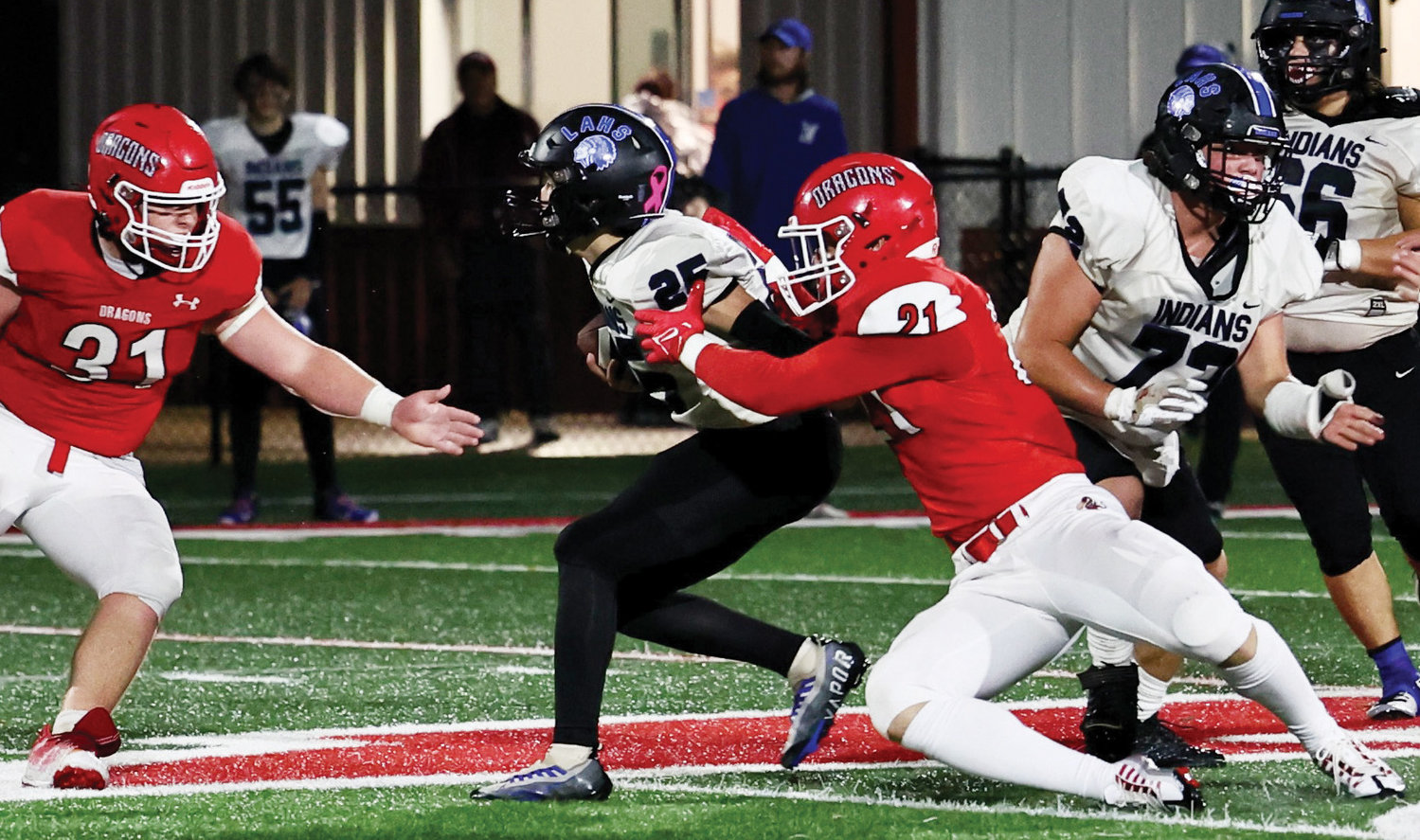 Purcell senior Hayden Ice (21) wraps up a Little Axe ball carrier while Brody Holder (31) moves in to help finish off the play. The Dragons defeated the Indians 48-6.
Janet Moore

Knowles electrified the crowd and lit up the scoreboard returning the opening kick off 82 yards to the house.

The salty sophomore finished with 201 all-purpose yards and scored twice, once to start the contest and then to begin the fourth quarter.

Junior Ryker Fink wore a cape on the other side of the ball flying around Conger Field to finish with 18 tackles on the night. He also broke up a pass play by the Indians and scored a touchdown on a one yard run.

Brody Holder wasn’t far behind turning in 13 tackles while Kash Guthmueller was in double digits with 11 stops.

Jett Tyler found the end zone on a 13 yard scamper in the first quarter while Brody Galyean got the job done both with his arm, throwing an eight yard touchdown pass to Jose Ochoa in the third period and rushed for a four yard touchdown.

Payson Purcell closed out the Dragon scoring in the fourth quarter on a 54 yard cross country jaunt.

Knowles led the rushing chart carrying the mail 15 times for 105 yards and had three catches for 14 yards.

Ochoa led the receiver corps with four grabs for 59 yards.

“We came out and got after them right off the bat,” head coach Tracy Scott said. “But I give Little Axe credit. They were scrappy and played hard.

“Their quarterback was pretty slippery. We’ll have to do a better job of tackling especially against Comanche,” the coach said.

“Fink and Holder both played well on defense,” Scott said. “Ochoa had a good night and Devan Martin played well.”

To go with his 166 yards passing, Galyean rushed for 32 yards.

Due to the weather forecast for Friday, Purcell and Comanche have moved their game to Thursday night at 7 p.m. to stay ahead of the storm.

The Indians are mainly a one back offensive team.

“They run some two back but don’t have a tight end. They throw the ball quite a bit,” Scott confirmed.

“Defensively they will be in a four man front and play a lot of man-to-man. They will bring some blitzes.”

Scott said the Dragons will try to establish the run early in the game.

“We’ll have to come out and get after it. Their quarterback throws the ball well but is not a big threat to run. We’ll have to pressure him and try to force some turnovers,” the coach said.

Purcell Head Coach Tracy Scott nominated Ryker Fink as the Defensive Player of the Week. Fink was all over the field last week making 18 tackles and breaking up a pass.

Getting the nomination as the Defensive Lineman of the Week was Brody Holder, who finished with 13 tackles.

Brendan Bacon graded out at 87 percent last week and was the Offensive Lineman of the Week nominee.

Nominated as the Offensive Player of the Week was Boston Knowles, who finished with 201 all-purpose yards and scored a pair of touchdowns.