Warrior defenders save the day in 13-10 win over CCS 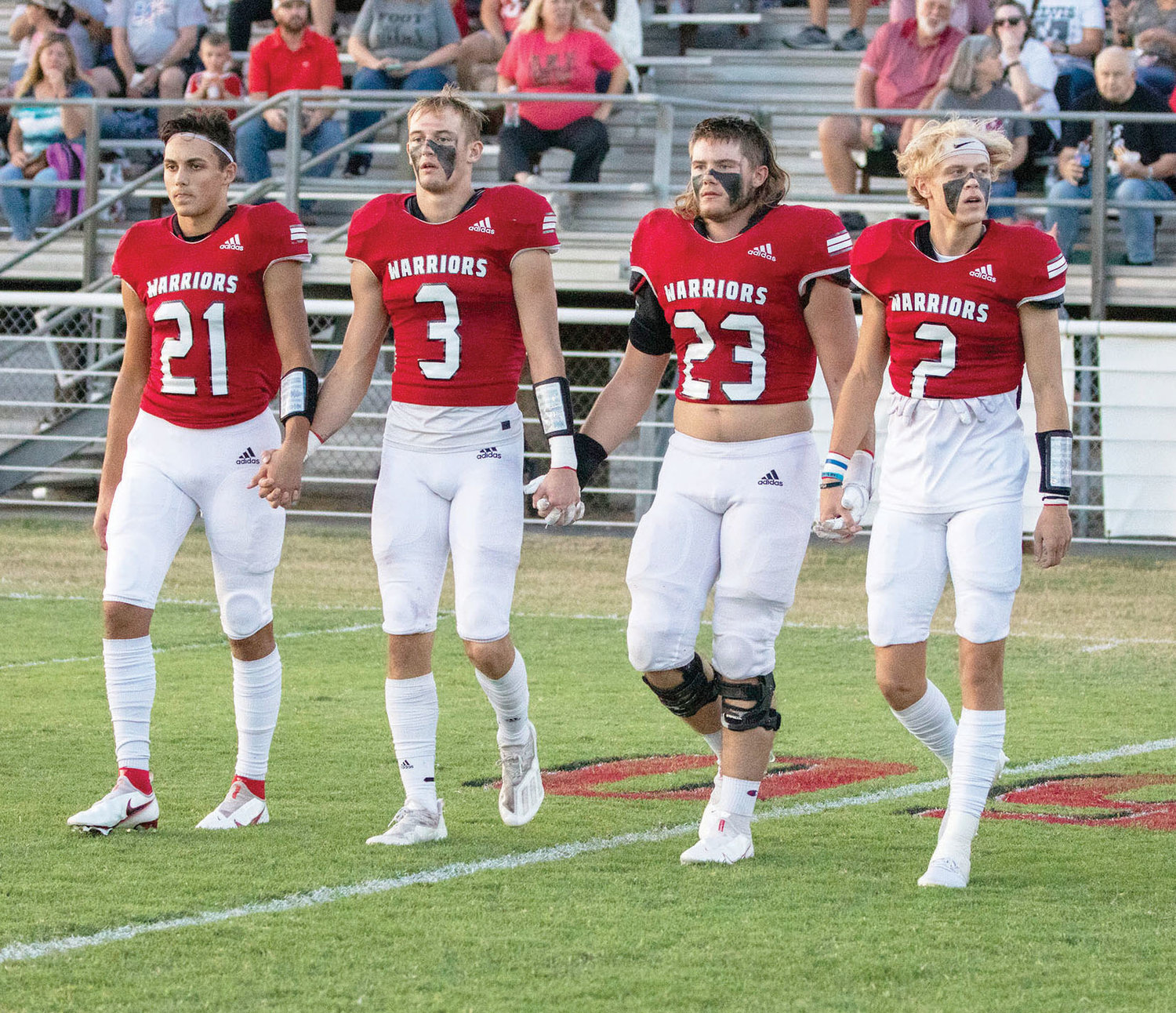 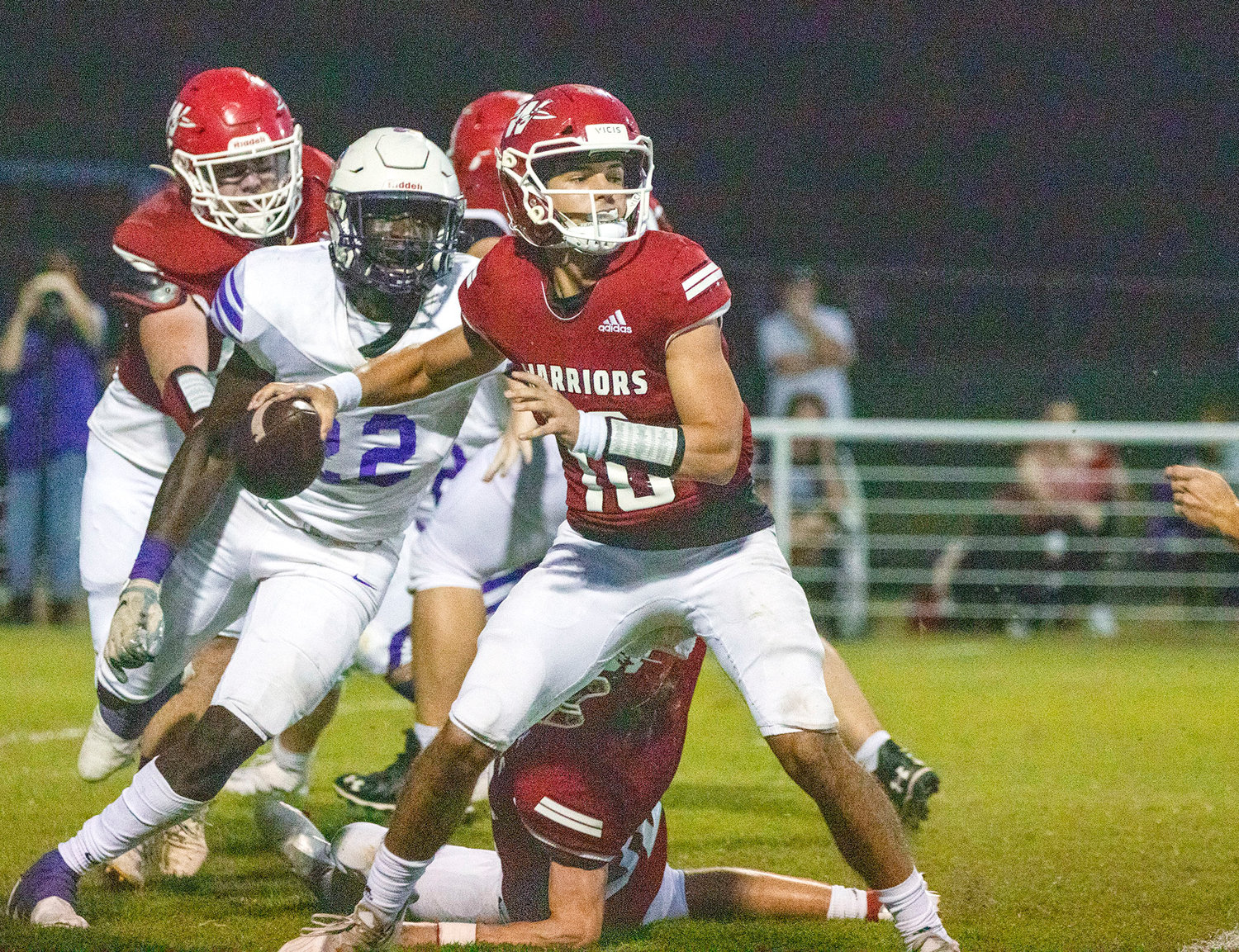 We proved we can win with defense in a big game.”
Brad Beller, Washington head football coach
John D. Montgomery

Over the course of the 2021 football season Washington’s offense has churned out points game after game.

But last Friday night it was the Washington defense that won the game in a tight 13-10 victory over Community Christian School at Reed Field.

The Royals picked off an errant Washington pass in the first quarter, securing a short field. But the defense did its job and held CCS to a field goal, which proved to be the difference in the contest.

Quarterback Major Cantrell found Luke Hendrix open for a 56 yard touchdown pass in the opening quarter. Cole Scott scored from three yards out in the second period and the PAT was good.

“And 82 of those yards came on their touchdown play,” head coach Brad Beller said. “Outside of  that one play, our defense played really, really well.”

Washington registered 17 tackles for loss in the game.

“We proved we can win with defense in a big game,” Beller said.

Linebacker Layne Spaulding once again led the tackling chart with 15 stops. Ben Vaughn had 10 tackles, Case Taylor eight stops and a pair of quarterback sacks while Milner made seven tackles including three for losses. Four of Bruce’s five tackles were behind the line of scrimmage.

Beller said his linebacking corps did a good job on their blitzes and stunts making eight sacks on the night.

“We just made too many mistakes offensively that kept the game close,” Beller continued.

Washington had holding penalties, blocks in the back, bad snaps, fumbles and an interception.

“We  had just about everything,” Beller said. “It was a group effort of playing bad. It was our worst offensive outing in the last five years.”

“Give CCS credit. They played fast and we didn’t play as fast as we usually do.”

Despite the offensive woes, Scott rushed the ball 27 times for 124 yards and the six point run.

“He got a lot of those yards after contact sometimes in our backfield. I was pleased with his execution,” the coach said.

The No. 2 ranked and undefeated  Warriors travel to Lexington tonight (Thursday) for a 7 p.m. date with the 3-3 Bulldogs.

Beller said Lexington will operate out of a spread formation on offense and show multiple formations on the defensive side of the ball.

“They use some 4-3 and some 3-4,” Beller said. “They are very multiple with their fronts on defense. We have to get back on track and control the game in the offensive line whether it is in pass protection or rushing the football.

“We’ve got to continue to eliminate the big plays. Last week we cut it to one. We need to cut it to zero,” the coach said. “We can’t have missed tackles or miscues to allow big plays.”

Washington Head Coach Brad Beller nominated Ben Vaughn as the Defensive player of the Week. Vaughn made 10 tackles against CCS, two for losses and registered one quarterback sack.

Nominated as the Defensive Lineman of the Week was Hayden Milner. He made seven tackles, including three for losses and had one sack.

Beller nominated Cole Scott as the Offensive Player of the Week for his 134 yards rushing including a touchdown, on 27 carries.

There was no nomination for Offensive Lineman of the Week.