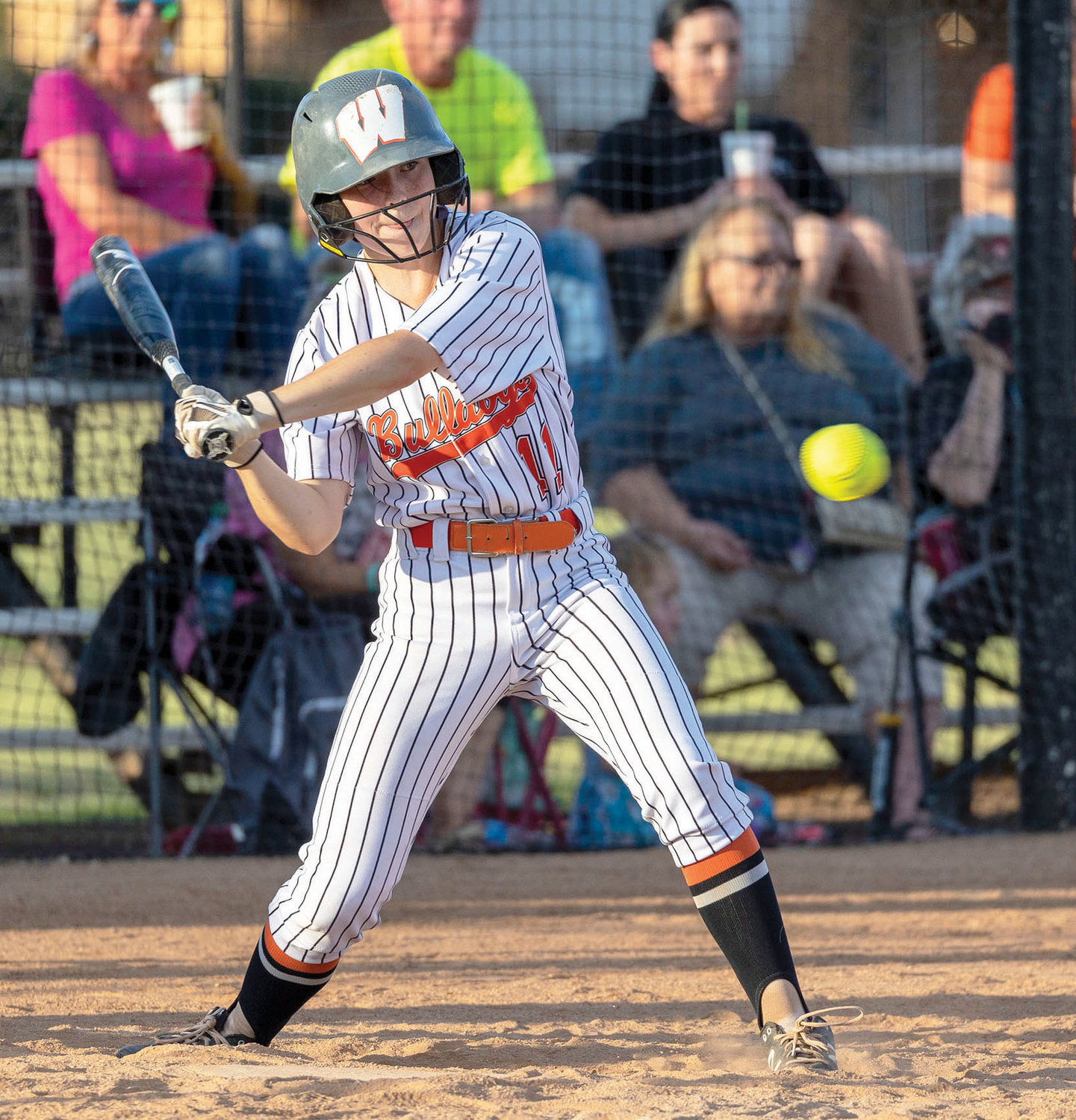 Wayne freshman Karsen Adams watches a pitch during the Bulldogs’ 1-0 over No. 17 ranked Roff (Class B). Adams was credited by her coach for a disciplined at-bat in the game to get on base, and later score the lone run. Wayne opens the playoffs today (Thursday) at Vanoss.
Greg Gaston - double g images
Posted Thursday, September 22, 2022 9:00 am
Emily Montgomery

Today Wayne is in Vanoss for District play. Games start at noon when the Lady Bulldogs play Velma. They play again at 4 p.m. against host Vanoss.

The District winner will move on in the postseason.

Monday night Wayne won a defensive battle with Roff, 1-0 (Class B #17). Despite being outhit by the Lady Tigers, 7-2, the Lady Bulldogs got another win.

“That was a great defensive game. I’m proud of the girls for their defense. In the past that is what has hurt us, but they didn’t panic when things got tough,” head coach Nikki Herrin said.

The Lady Bulldogs pushed one run across the plate in the first inning thanks to a walk by Karsen Adams and a single by Faith Brazell.

“Karsen got a walk and I’m proud of her for being disciplined at the plate. If she hadn’t walked, we could not have gotten the run.”

In past games the Lady Bulldogs have had an inning where things seem to fall apart defensively, but, according to the coach, that didn’t happen in this game.

“They had the bases loaded with no outs and the girls held their composure and did not let things get out of control. We got out of that inning and ended up winning the game.”

Brazell was on the rubber for Wayne the whole game. She threw a complete game shut out, striking out seven.

“A goal for us has been to use all of our pitches in a game and Faith did that against Roff. She threw a great game.”

Last week Wayne added three more wins with a 5-1 victory in Rush Springs on Tuesday, a 4-3 win against Fletcher in a make-up game on Thursday and an 11-2 run rule over Springer on Friday.

The game with Springer went five innings and the Lady Bulldogs had eight hits, led by Addison Keeler’s two.

“We didn’t play our best, but it was enough to pull out the win,” Herrin said.

Thursday’s game with Fletcher was another game that Herrin was proud of her team.

They had the lead through the entire game, but allowed Fletcher to score two late runs .

Brazell was in the circle for the win, fanning 12 batters. And Keeler led the team at the plate, going 2-3 with an RBI.

Last Tuesday’s win over Rush Springs was a good conference win, according to Herrin.

“Rush Springs is a good team and it was a good conference win.

“Faith threw a good game and again used all of her pitches. Her change up was most effective at keeping them off balance.”

Wayne had 10 hits and Jordynn Debaets and Brazell led the team with two apiece.

Tuesday night Wayne was in Ninnekah for their final regular season game.

“The girls are playing well right now and we’ve talked about how they are more than capable of winning.

“I’m proud of the progress they’ve made and we are ending the season on a roll,” Herrin said.

With the win against Roff on Monday, Wayne’s record moved to 12-8.