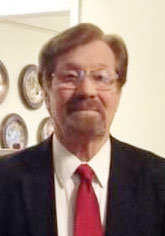 Funeral services for Dean Warren, 80, of Purcell were held Friday, September 3, 2021 at Landmark Church in Purcell. Interment was at the Fairview Maguire Cemetery in Noble. Services were under the direction of the Wilson-Little Funeral Home in Purcell.

The family eventually returned to Noble, Oklahoma, where he met and married Jaynan Ingle. To this union, two children, Chris and Kim, were born, eventually settling in the Owasso area and later Noble.

At the time, Dean was working as a machinist for American Airlines, before opting for early retirement in 1982. Dean loved classic cars, and tinkering on automobiles. He built, bought and sold and even traded classics and muscle cars, and he loved anything and everything to do with corvettes.

His true passion was music, and Dean was a gifted musician and singer. Dean played simply for the love of music and spent many years as the front man for Dean Warren and The Country Four. He loved riding horses, and saddled up for many parades and land runs. Dean once rode a horse from Norman, Okla., to New Mexico, making friends and memories, all the way.

He married Sherry Taliaferro on January 19, 2008, and they made their home in Purcell. Dean was a family man first; he loved fiercely and was always on the lookout for his next adventure. He will be dearly missed!

He was preceded in death by his parents, Omer and Lovie Warren and brother, Johnnie Warren.