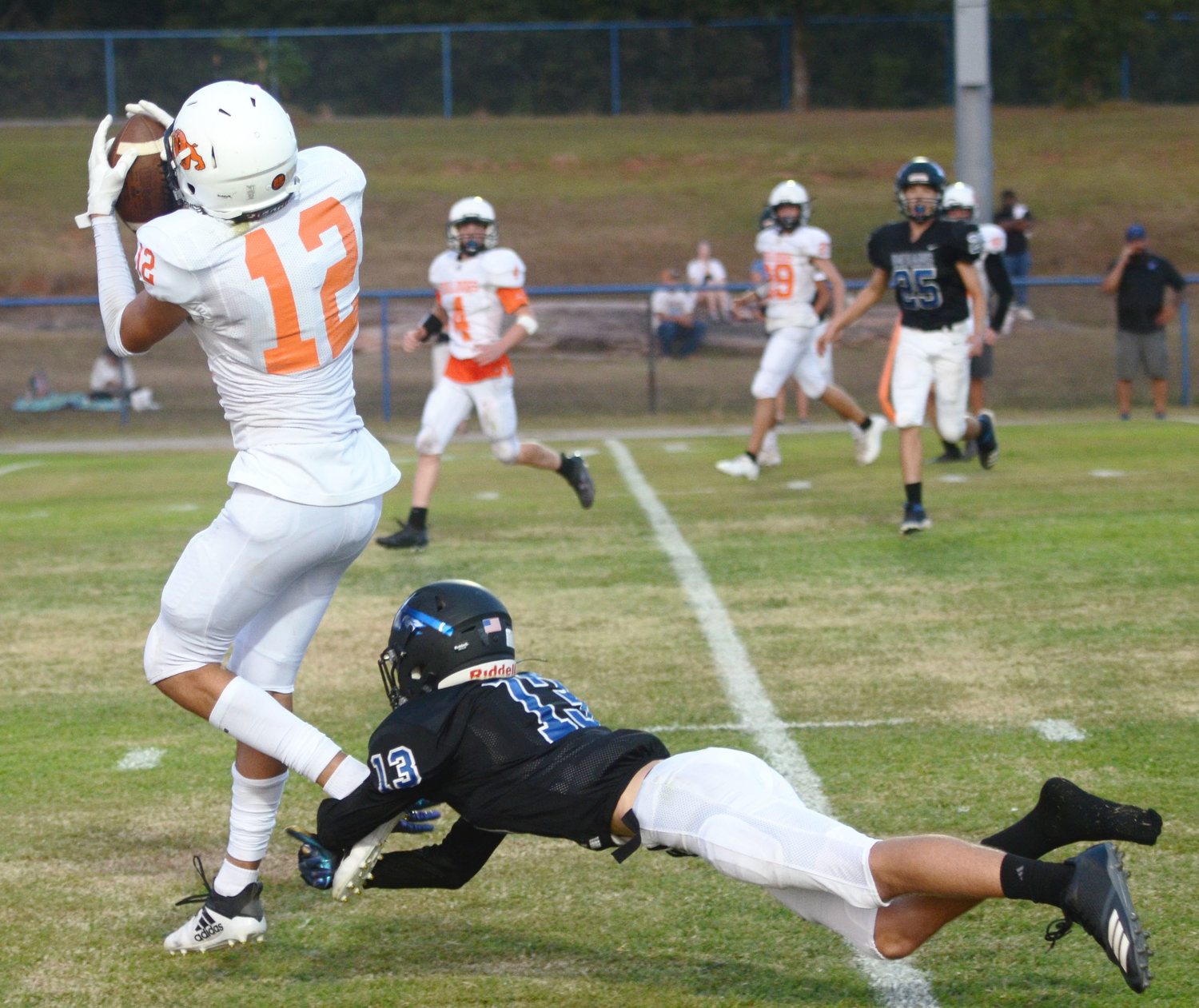 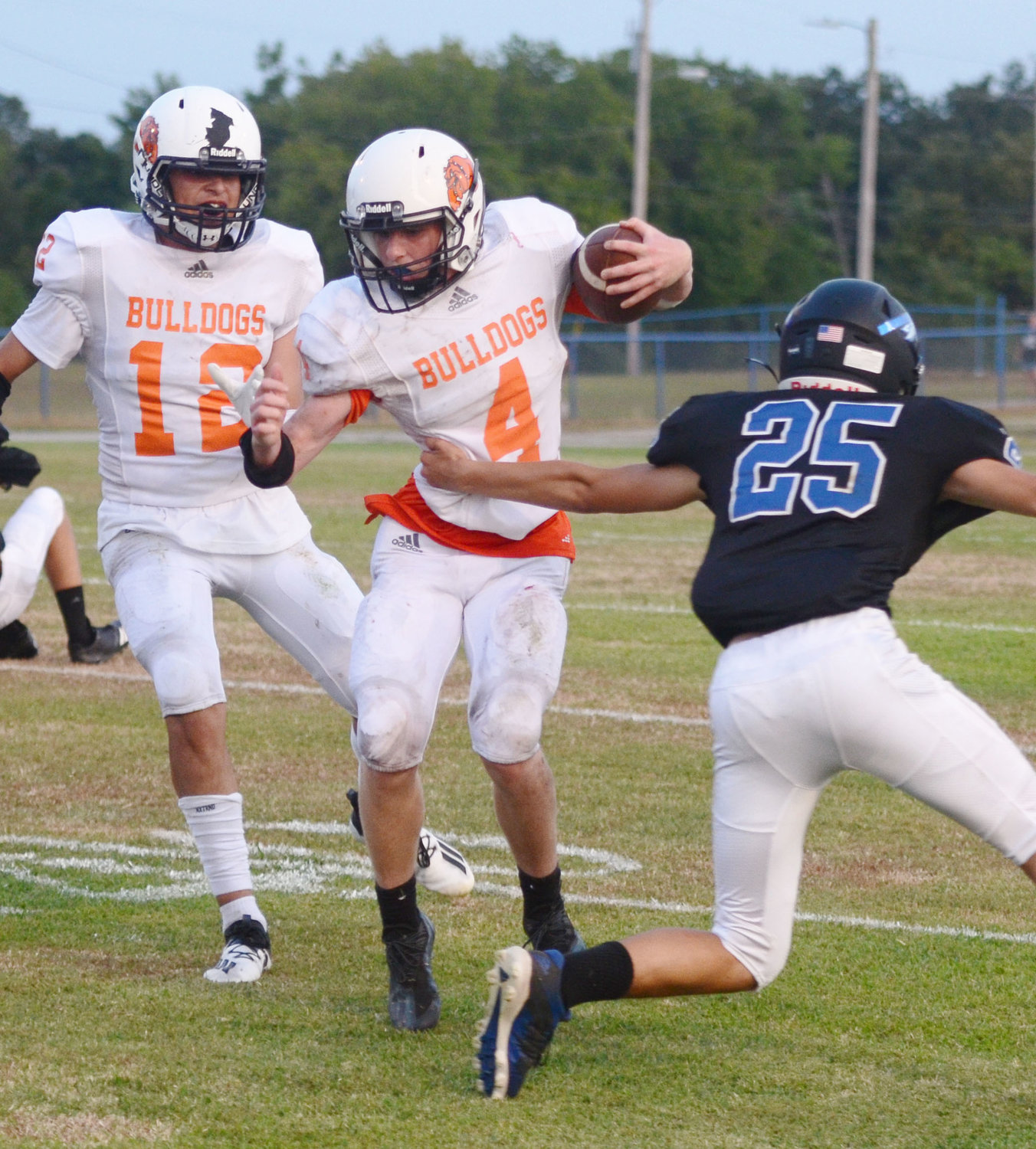 When Lexington fell behind 14-0 in the first quarter last Thursday night at Little Axe head coach Keith Bolles liked what he saw.

“You always worry about the first game because of the heat,” Bolles said. “You wonder if they are mentally prepared.

“But there was no quit in our kids,” the coach continued. “When we fell 14-0 they had that look in their eyes and clawed their way back into it. You can’t ask for any more than that.”

Heath Winterton did just about everything humanly possible for the Bulldogs in the victory.

He played running back and quarterback in the wildcat on offense and linebacker on defense, where he registered six tackles.

“He played really well,” Bolles said. “He threw the ball well and ran it well. He was a multipurpose player for us.”

Winterton carried the mail 20 times for the Bulldogs against Little Axe for 87 yards and three touchdowns. He was 2-5 passing for 15 yards.

“And Ean Caywood played well at quarterback for us,” the coach said.

Bolles said Israel Trejo had two big catches for touchdowns in the game. Trejo finished the night with five snags for 118 yards and the two scores.

“Unfortunately, we had two long pass plays for touchdowns that got called back,” the coach said.

Bolles had words of praise for freshman Wyatt McBride and senior Conor Wesson for their line play performances on both offense and defense.

Jimmy Northrup, Chase Johnson and Trejo all had interceptions in the game.

Trejo’s saved a touchdown when he stepped in front of an errant Indian aerial on the Lexington three yard line.

Coach Jared Garrett said freshman Dalton Brewer stepped up for the Bulldogs at outside linebacker and that Chandler Soto had a top-shelf performance.

Soto led the team with eight tackles while Brewer was in on a pair of stops.

Bolles pointed to a key play Wesson made at defensive end.

“He made a great play on a reverse in a crucial situation,” Bolles said. “He stayed home and forced the Indians into a 12-14 yard loss, forcing them to punt.”

Wesson was credited with five tackles on the night.

“We had some young kids that stepped up and did some things we’re pretty proud of,” Bolles said. “They showed us they are ready to play varsity football,” the coach said of McBride and Brewer.

With the undefeated Wayne Bulldogs coming to town Friday for a 7:30 p.m. date with the Dawgs Lexington has been working on their game.

“We took this week to try to make corrections from the Little Axe game,” Bolles told The Purcell Register.

Nominated as the Offensive Lineman of the Week was Wyatt McBride, who graded out at 80 percent against Little Axe.

Chase Johnson got the nod as the Defensive Player of the Week. He made six tackles and had an interception in the victory over the Indians.

Conor Wesson was nominated as the Defensive Lineman of the Week. He made nine tackles.