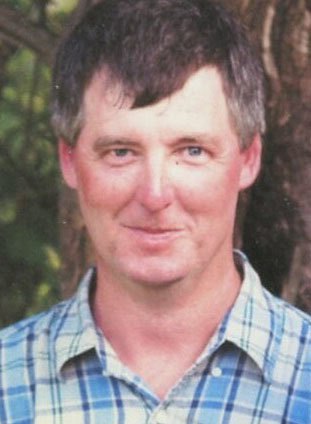 Darrell James Gregg died March 29, 2022, in Oklahoma City, Oklahoma at the age of 49 years 27 days. Funeral services were held Monday, April 4, 2022 at Wadley’s Funeral Chapel. Interment followed at the Wanette Cemetery in Wanette, Oklahoma, entrusted to the care of Wadley’s Funeral Service. Online condolences may be made, and services were livestreamed at www.wadleysfuneralservice.com.

Darrell was born March 2, 1973 in Ada, Oklahoma, to Larry and Bonnie Jo (Newberry) Gregg. He graduated from Turner High School in Burneyville, Oklahoma, in 1991.

Darrell had a few careers in his lifetime, such as being a driver for the railroad, delivering the train staff to and from the trains. He was a custodian at Wanette Public Schools, a coach for Special Olympics, a volunteer firefighter for the Wanette Fire Department, and a Mason.

Darrell also worked for the town of Wanette, for the Braum’s ranch, and most recently for the City of Ada in the Public Works department.

Darrell loved his family and spending time with them every chance he could. He enjoyed fishing, hunting, camping and swimming. Darrell was an outdoorsman and loved animals, raising cows, turkeys, chickens and the occasional goat.

Darrell married Bonnie Jean Compton on September 15, 2007 at the United Methodist Church in Wanette and they made their home in Ada, Oklahoma.

Darrell was preceded in death by his mother, Bonnie Jo Purdy; his daughter, Tori Compton; and his grandparents, Bertha Rogers, J.V. Gregg and Joe and Bonnie Newberry.

Survivors include his wife, Bonnie; his daughter, Rebecca Compton and her fiancé, Billy Hinkle; his daughter, Emily Gregg; his son, Jacob Gregg; his grandsons, Hank  and Carson; his father, Larry Gregg and wife, Cheryl; his sister, Donna Gregg; his brother-in-law, Albert Wertman; his nephews, Chris Gregg and Matthew Gregg; his nieces, Ashley McMillan, Shaylie Wertman and Madison Wertman;  his aunts and uncles, Bobby and Sandy Idlett, Jerry and Linda Gregg and Bill and Pat Eastwood; his cousins, Tommy Gregg, Jeanne and Eric Rowlett and their son, Nate, Pam and David Greenley and their son, John, and Jared and Amy Gregg and their daughter, Brooklyn; and numerous other relatives and friends.