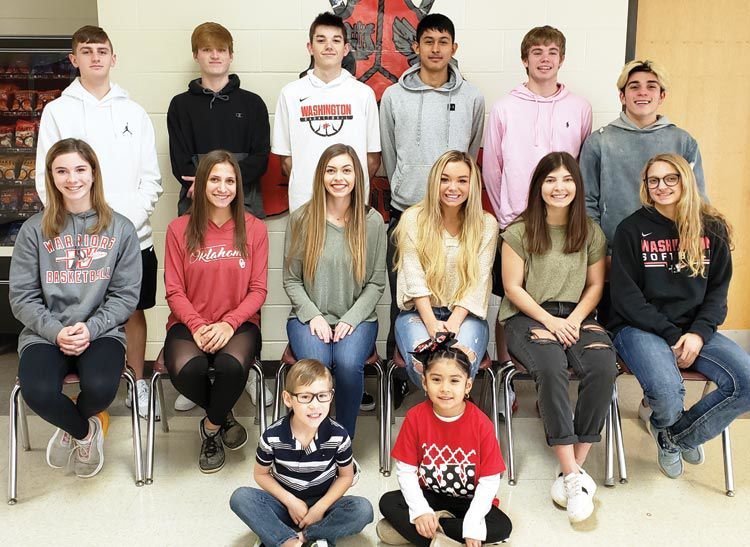 Basketball homecoming will be played Friday at Washington High School with the coronation of a queen and king at center court.

The Warriors will play the Pauls Valley Panthers.

Colten Ross, the lone senior in the court, will claim the king’s crown.

His attendants will be juniors Aden Hyde, Jaxon Sanchez and Graham Schovanec; Hector Quinonez, a sophomore, and freshman Hayden Hicks.

Andrews, 18, is student body and National Honor Society president. She is a Fellowship of Christian Athletes officer who participates in cross country and cheer. She is a three-time state champion in cheer, three-time state qualifier in cross country and one-time Game Day State Cheerleading runner-up. She is the daughter of James and Kimber Andrews.

Hayes is in Student Council, NHS, FCA and Fish Club. She is a cheerleader and participates in competitive cheer and cross country. She is a three-time state champion in cheer and was State Runner-up in cheerleading and Game Day competitions. She is the daughter of Doug and Marti Hayes.

Taylor is senior class president and is a member of Student Council, FCA and NHS. She is a cheerleader and a three-time State Champion in cheerleading. She is the daughter of Phillip and Penny Taylor.

Scheffe plays basketball and competes in cross country. She is a member of NHS, FCA, Fish Club and Science Club. She is the daughter of Justin and Teresa Scheffe.

Richardson is a member of NHS. She competes in cross country and track and also plays basketball and fast-and slow-pitch softball. She is the daughter of Angela and Eddie Vaughn and Stacey and Adam Richardson.

Lucas is on the superintedent’s honor roll. She plays basketball, fast- and slow-pitch softball and competes in track. She played on the fast-pitch State Champion Runner-up team. She is the daughter of Brad and Shelby Lucas.

Ross is a member of FCA and NHS. He has played basketball and competed in track for four years. He is the son of Jeff and Lisa Ross.

Sanchez is a member of FCA and plays basketball and football. He was a member of the State Champion Runner-up football team. He is the son of Rayson and Ashley Sanchez.

Schovanec plays football and basketball. He is the son of Wendi and Phillip Scholanec.

Quinonez plays basketball and travel ball, as well as rides horses. He is the son of Flor Morales and Frenando Romero.

Hicks is a member of FCA. He plays basketball and competes in track. He is the son of Chad and Laurie Hicks.

Rounding out the court will be the crown bearer and flower girl.

Crown bearer will be 6-year-old Liam Scheffe. He is the son of Justin and Teresa Scheffe.

Esmeralda Ocampo, 5, will be the flower girl. She is the daughter of Nancy and Jesus Ocampo.