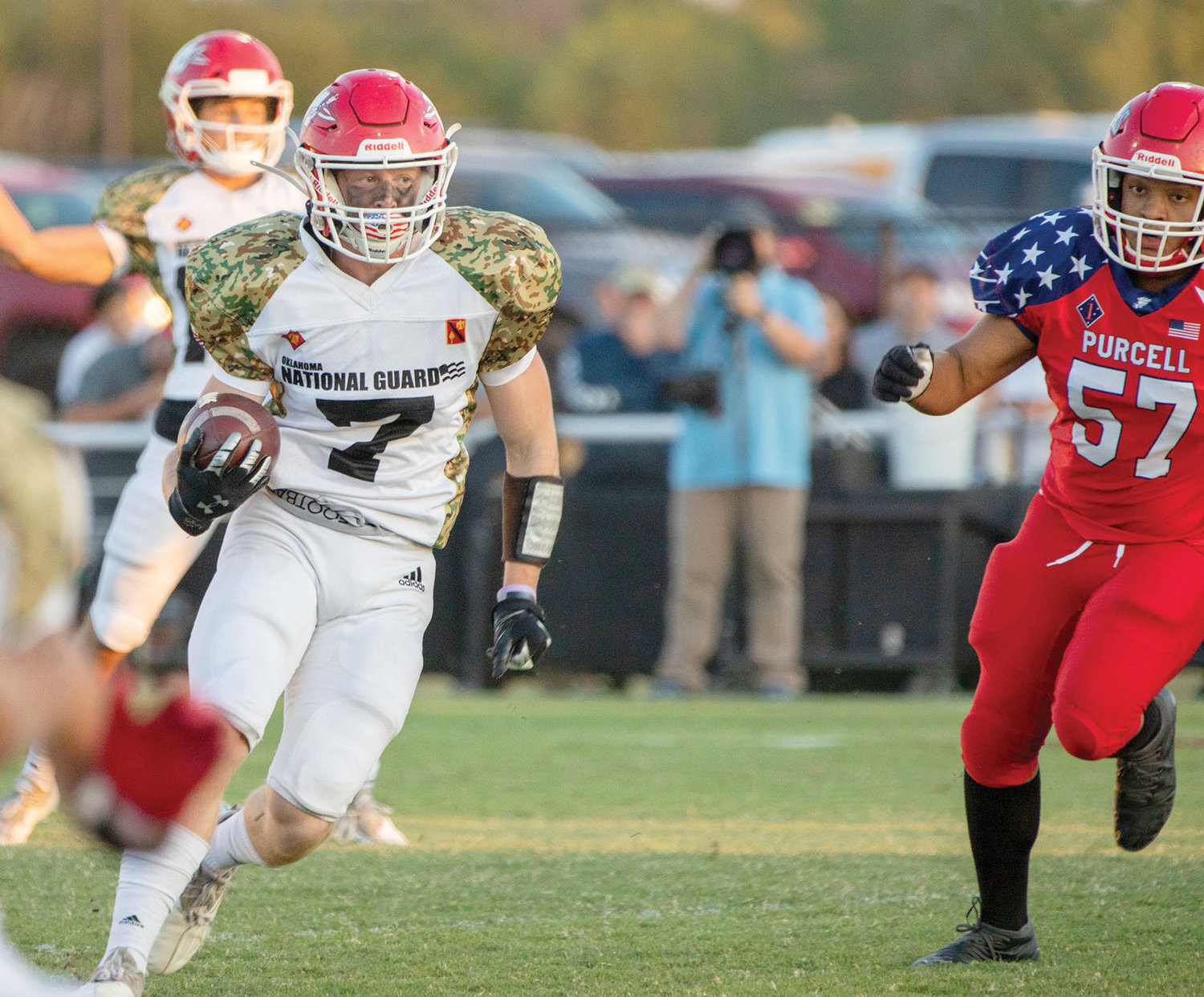 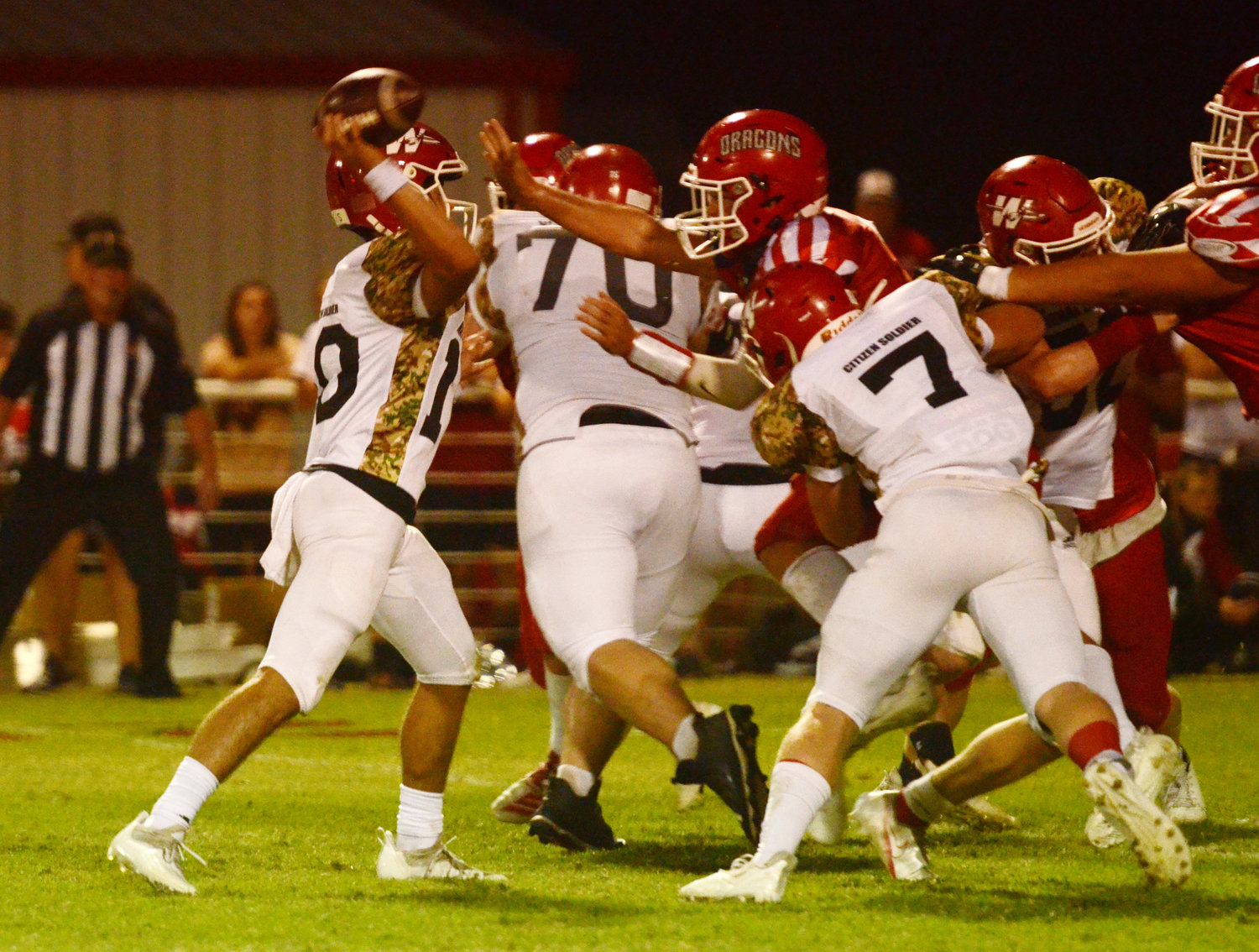 Sophomore Major Cantrell played more like a general last Friday night when Washington knocked off Purcell, 42-13, in the opening district game of the season.

The Washington quarterback completed 10 of 16 passes for 312 yards and five touchdowns leading the Warriors to the victory circle.

Cantrell hit Kobe Scott on a 48 yard scoring strike in the first quarter and found him again in the third period on a 31 yard scoring play.

Cantrell hooked up with Luke Hendrix for a cross country 80-yard touchdown in the second quarter and flipped a three yarder to Lane Steel before halftime when they led 28-7.

The only Warrior touchdown on the ground came via sophomore Kade Norman.

“His 24-yard run was one of the best runs of the year,” head coach Brad Beller said. “He’s a utility guy. He plays everywhere from running back to slot receiver and three different positions on defense. He’s only a sophomore and has a bright future ahead of him.”

“If you look at our passing game, even though we only threw it 16 times, I thought we were effective,” Beller said. “Major Cantrell continues to grow in maturity and experience. He’s starting to play really good football and efficient football at the right time.”

Cantrell spread the wealth with all four of the receivers that found the end zone also making multiple catches as the game went along.

“They were making plays all night,” the coach said. “I was really proud of those four receivers and what they were able to do.”

Linebacker Layne Spaulding led spearheaded the defense with 11 tackles. Rope Scott had five stops from his defensive lineman position and recovered a fumble.

“Defensively we were a bend but don’t break type of team. We didn’t play overly physical but we made plays when we had to,” Beller said.

The coach singled out the play of both linebackers, Spaulding and Keller Howard.

“They did an awesome job of getting over blockers on the edge and plugging the middle,” Beller said. “And once our two safeties, Jaxon Hendrix and Reese Stephens, settled in they helped us with the run game.

Up next for the No. 2 ranked Warriors is a date at Bethel to square off with the 4-0 Bethel Wildcats.

Kickoff is set for 7 p.m. for the Friday night affair.

The Wildcats operate out of the spread on offense and utilize a 4-3 alignment on defense.

Beller reports the key to success against the Wildcats is stopping their running attack.

“They have two really good running backs and are by far the biggest and most athletic linemen we’ve seen so far,” Beller said.

“They are all 240 pounds plus but they are a very athletic 240 plus. They have size and speed.

“We’ll have to be patient on offense and take what the defense gives us and take care of the football,” he concluded.

Beller nominated Layne Spaulding as the Defensive Player of the Week for his 11 tackle performance against Purcell last Friday night at Reed Field.

Getting the nod as the Defensive Lineman of the Week was Rope Scott. Scott registered five tackles and recovered a fumble.

Nominated as the Offensive Lineman of the Week was Tanner Winlock, who graded out at 89.9 percent last Friday.