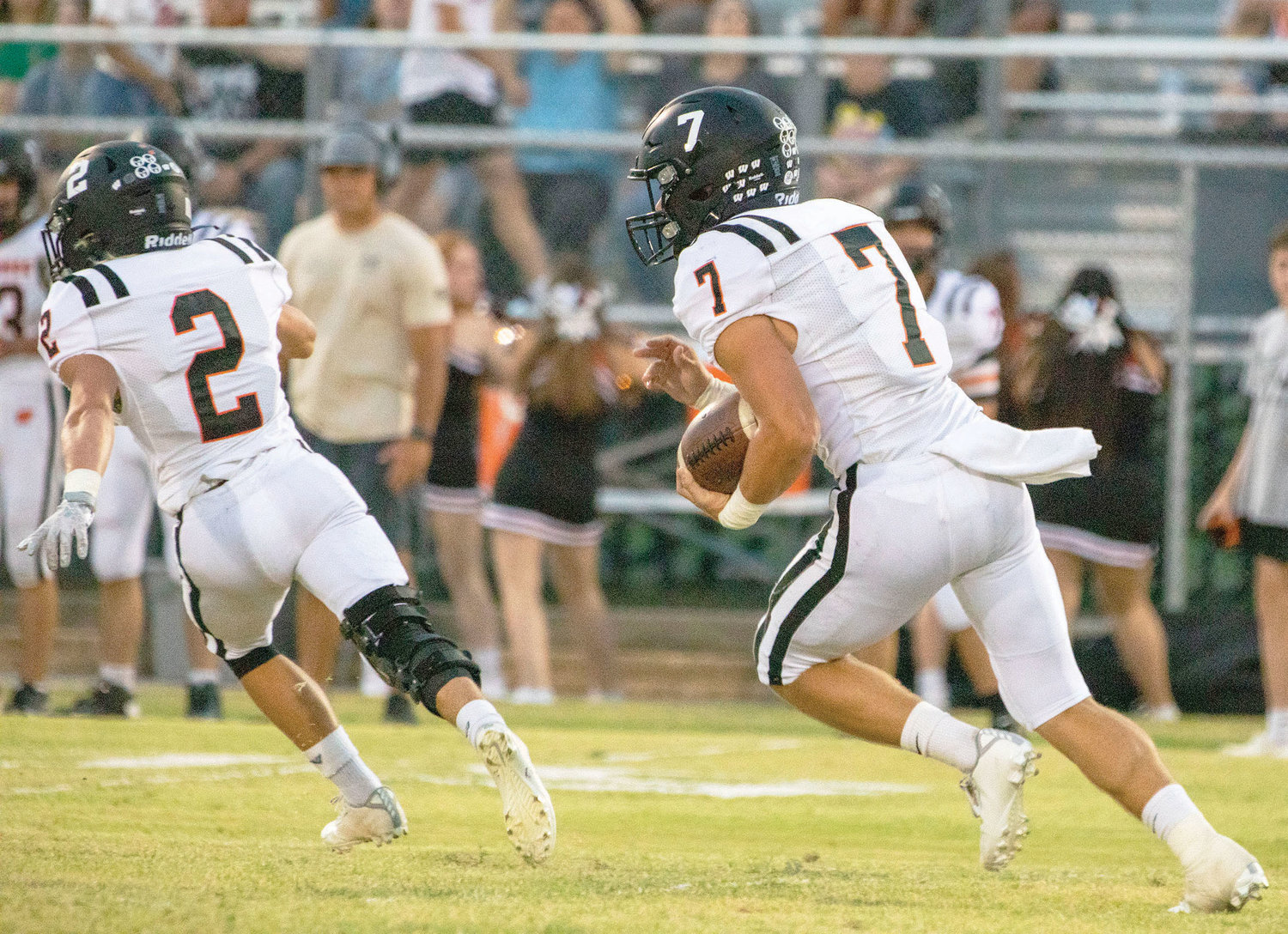 Wayne senior Ethan Mullins (7) runs with the ball behind the blocking of Wayne junior Rhett Kennedy. The Bulldogs travel to Tonkawa Friday for a 7:30 game against the Buccaneers to open the State playoffs.
Greg Gaston - double g images 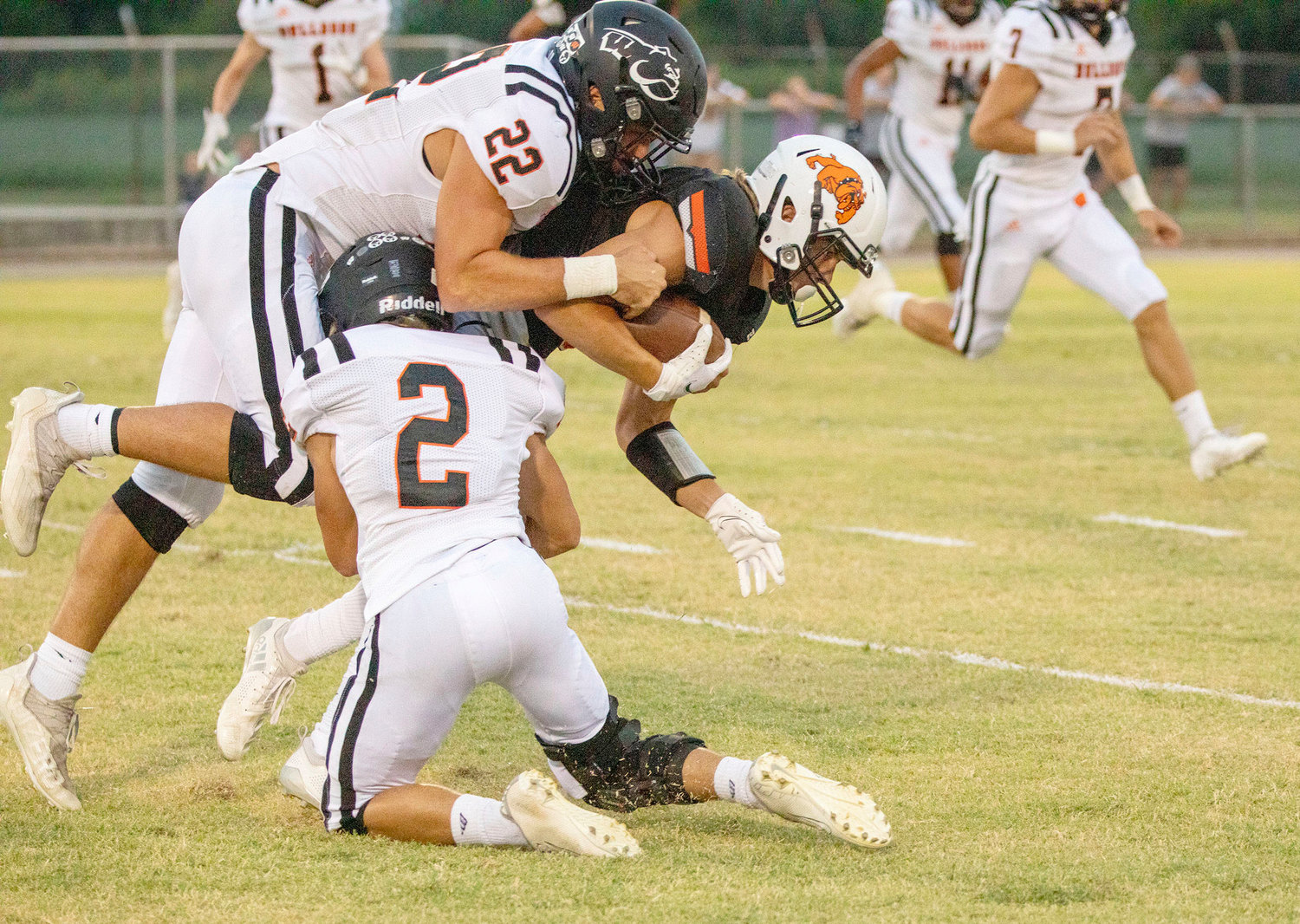 Wayne senior Brannon Lewelling (22) and junior Rhett Kennedy (2) team up to take down a Lexington ball carrier earlier this season. The Bulldogs travel to Tonkawa Friday for a 7:30 game against the Buccaneers to open the State playoffs.
Greg Gaston - double g images
Previous Next
Posted Wednesday, November 10, 2021 9:00 am
John Denny Montgomery

Wayne opens the State playoff Friday night with a date with the Tonkawa Buccaneers.

The Buccaneers finished second in their district behind Class A’s No. 1, Cashion (8-1).

Running back Cam Jackson has the attention of the Wayne coaching staff.

“If the running back isn’t the best we’ve seen he’s close to it,” Sharp said. “He’s a short, power back with good moves. We’ll have to rally to the football and not get out of position.”

Offensively, Tonkawa lines up in multiple formations and will play with the quarterback both under center and out of the shotgun.

“They may be in the I-formation or in trips open,” Sharp said.

The Buccaneers are also multiple on defense and have shown both three and four-man fronts.

“Their linebackers run down hill and the linemen are physical,” Sharp said. “They are extremely well coached. (Mike Kirtley) has been there a while and you can tell they know what to do. This game will be one of those games of who doesn’t make the big mistakes.”

Wayne laid a 38-10 whipping on Stratford last Friday in the final regular-season game of the year.

Wayne got off to an auspicious start with a sloppy, scoreless first quarter.

“We started out really sluggish and were fighting our Achilles heal - holding penalties,” Sharp said. “We were penalized more Friday than we have been all season. We can’t have all those mistakes we made this Friday or we’ll be done.”

Once the Wayne offense found its footing it was full steam ahead in the second quarter.

Led rushing dynamo Ethan Mullins’ four second-quarter touchdowns, the Bulldogs quickly slammed the door on any hopes Stratford had of an upset.

“We started to pull away in the second quarter and got rolling to finish it up,” Sharp said.

As a team Wayne rushed for 380 yards.

Mullins added a 50-yard touchdown run in the third quarter to finish the night with 321 yards rushing on 22 carries. He scored five touchdowns on the ground and added 72 yards through the air.

Mullins has rushed for over 2,500 yards this season and has 38 touchdowns to his credit.

Big Brannon Lewelling had 19 yards on the ground in the win.

Kaleb Madden had two carries for 23 yards and one catch, which went for 70 yards.

Stratford scored a touchdown in the third quarter and in an odd sequence of events, possessed the ball for the entire fourth quarter.

Their final score came on a 21-yard field goal with 15 seconds remaining in the game.

Sharp was proud of his defense’s effort to keep the score to a field goal with a gritty goal line stand at the one yard line and forcing a 15-yard loss.

The Wayne run defense was not in the giving mood and Stratford had to settle for minus two yards on the ground.

They found a little success through the air, putting up 166 yards, but weren’t able to put many points on the board.

“We were sloppy at times and weren’t communicating,” Sharp said. “We had a few mental mistakes but for the most part we were playing off guys and making tackles. We were not giving up big plays.”

Lewelling led the team in tackling with 15 stops and a sack.

Mullins registered six tackles, a sack and picked off a pass.

“The D line played really well and did a good job stuffing the run,” Sharp said. “I wish we could have gotten to the quarterback a few more times.”

Now it’s on to Tonkawa where the senior class has experience in playing.

“We went up to Tonkawa in the second round of the Playoffs when they were freshmen,” Sharp said. “Some of them got a lot of playing time in that game.”

The nomination for Defensive Lineman of the Week was Kevin Bynum.

The Offensive Lineman of the Week nomination went to Andy Lee. Lee graded out at 86%.