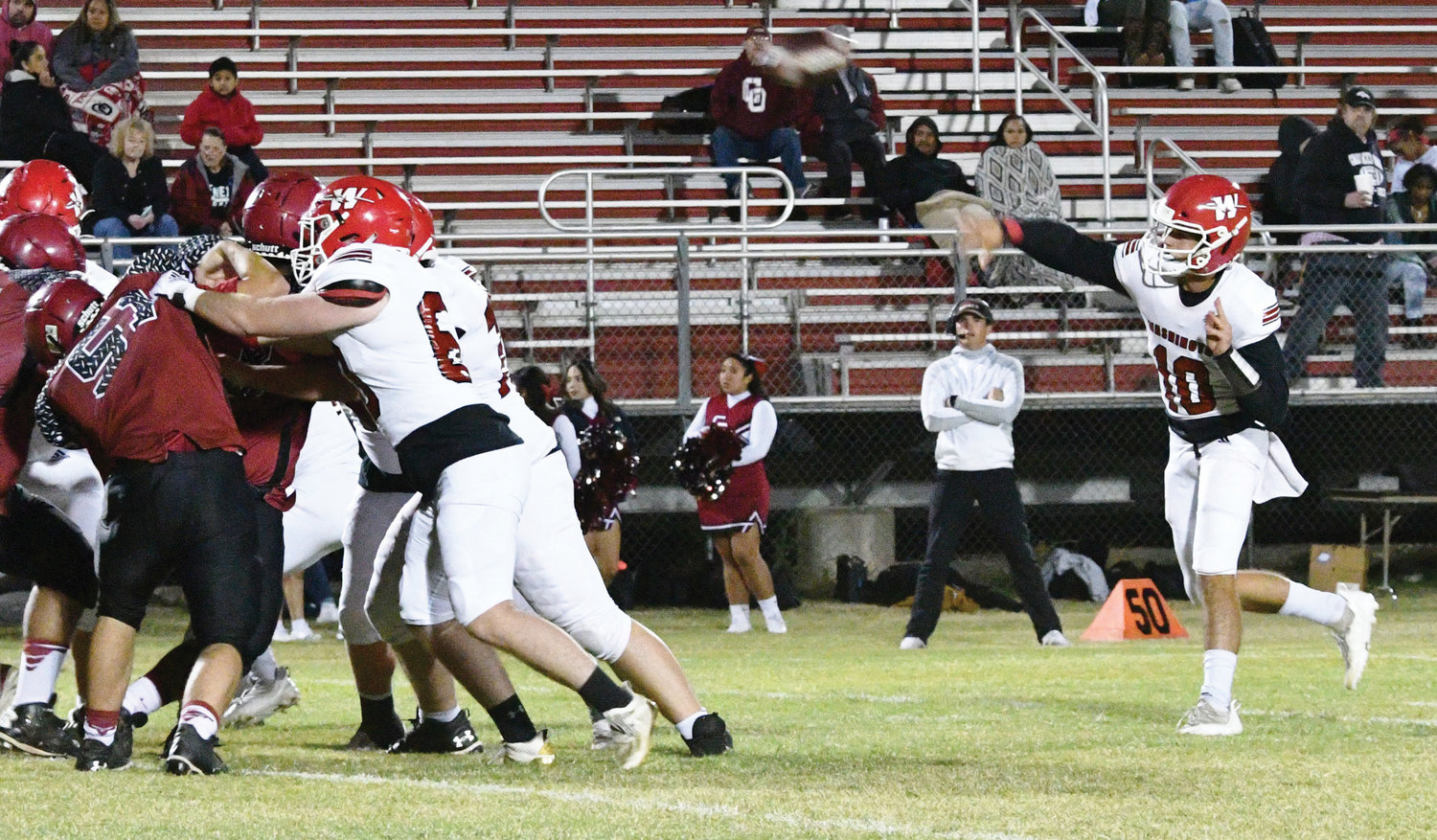 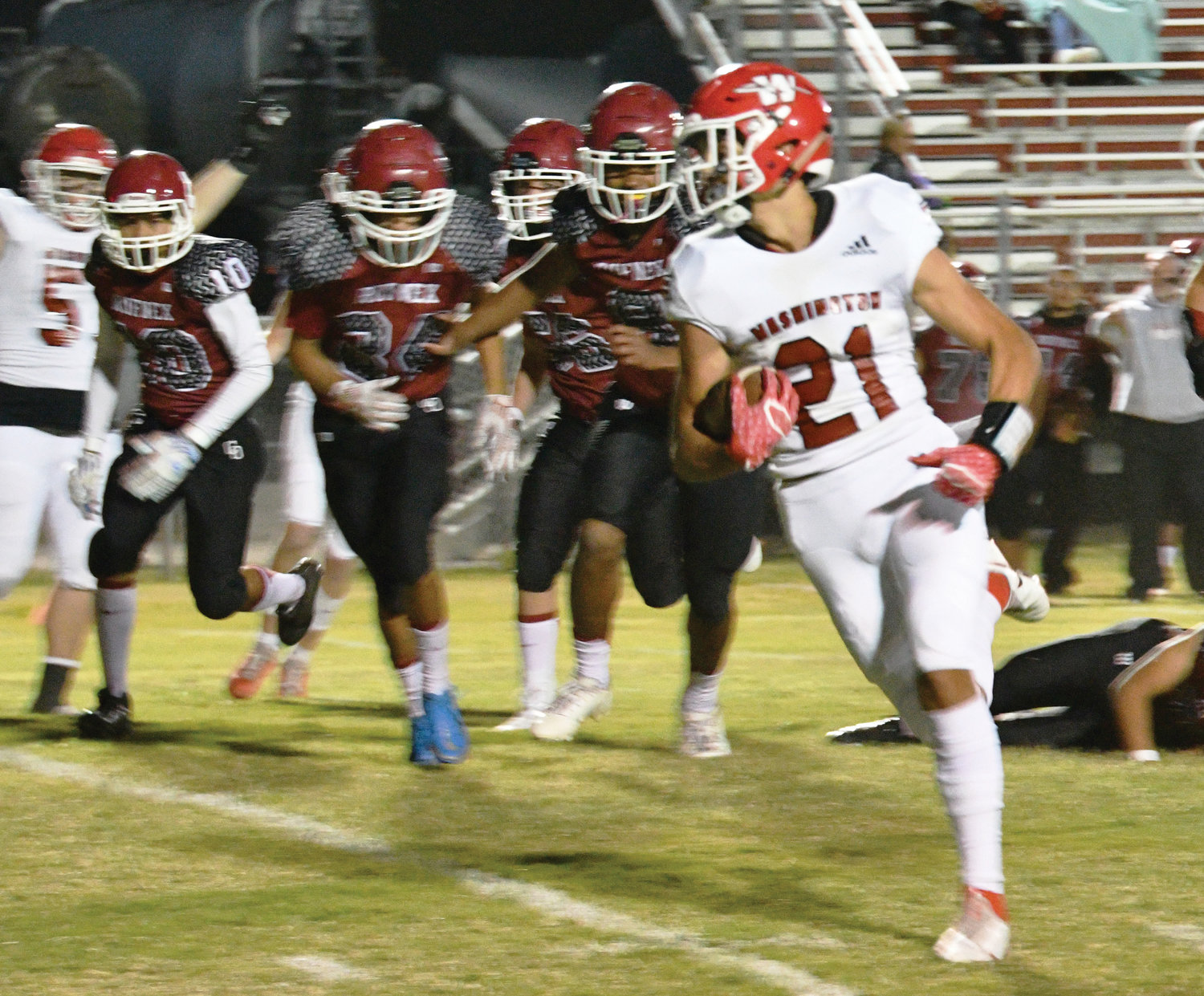 Washington hung half a hundred on Crooked Oak in the first half last Friday night on their way to a 63-0.

With Washington playing everyone Beller said it was gratifying that his team could play at that level from the first, second and third teams.

Washington ran a grand total of 27 plays and scored seven times. The other two touchdowns came on a Lane Steele 53-yard punt return in the opening quarter and a Baylor Haynes fumble recovery in the end zone in the third period.

Major Cantrell was efficient in the passing game going 5-6 for 103 yards and touchdown strikes to Luke Hendrix for four yards and Ben Vaughn on a 35 yarder. Both passing touchdowns came in the opening quarter.

Cole Scott scored on runs of three and 12 yards. Brayden Arthur tallied from 27 yards out while Kade Norman bolted in from four yards out and Hudson Howard closed out the scoring with a 20 burst.

The Warriors combine their talents on defense to limit the Ruf Nex to 50 yards of offense. Nine rushing and 41 passing.

“It was another team effort,” Beller said. “We had eight guys score touchdowns. It was exciting when you have that many people involved in the game.

“I was very proud of Major Cantrell for his passing efficiency. He was 5-6 for 103 yards and two touchdowns. He did a great job of putting the ball in the position for them to catch it not only on the deep balls but throwing to open spaces where guys could go for it.”

All four of the running backs in the contest found the end zone.

“It was a big night not only for them but for our first, second and third team lines to see the job they are doing,” Beller said. “I could name all of them but it would be like 20 names,” he said with a chuckle.

“We tried to rotate as many guys as we could since our JV played the night before in Hobart for their homecoming. Hollis couldn’t come so he (Beller’s former teammate Colt Allison) called and asked if we could send a JV team to play.”

After a tie game at halftime, 13-13, Washington scored three times in the second half to post a 34-13 victory so the JV players actually played back-to-back nights.

The final regular season game for the No. 1 ranked Warriors is Friday night at CHA in Norman. Kickoff is set for 7 p.m.

The Royals run a spread offense but will occasionally bring in a tight end or two and try to run the football.

“They have two good quarterbacks, a right hander and a left hander. They have a wide receiver who they get the ball to on short, quick route and even some intermediate routes. He’s pretty quick,” Beller reports.

On defense the Royals employ a 3-3 stack and bring pressure from at least six positions every play.

“They try to create as much havoc in the backfield as they can,” Beller said.

The Royals are 3-6 on the season while Washington rolls into Norman at 9-0.

Washington Head Coach Brad Beller nominated Major Cantrell as the Offensive Player of the Week. Cantrell was 5-6 passing for 103 yards and two touchdowns.

The Offensive Lineman of the Week nomination went to Easton Berglan who graded out at 90 percent against Crooked Oak.

Beller nominated Hayden Milner as the Defensive Lineman of the Week. He had three tackles and a quarterback sack.

Layne Spaulding got the nod as the Defensive Player of the Week. He registered four stops against Crooked Oak.