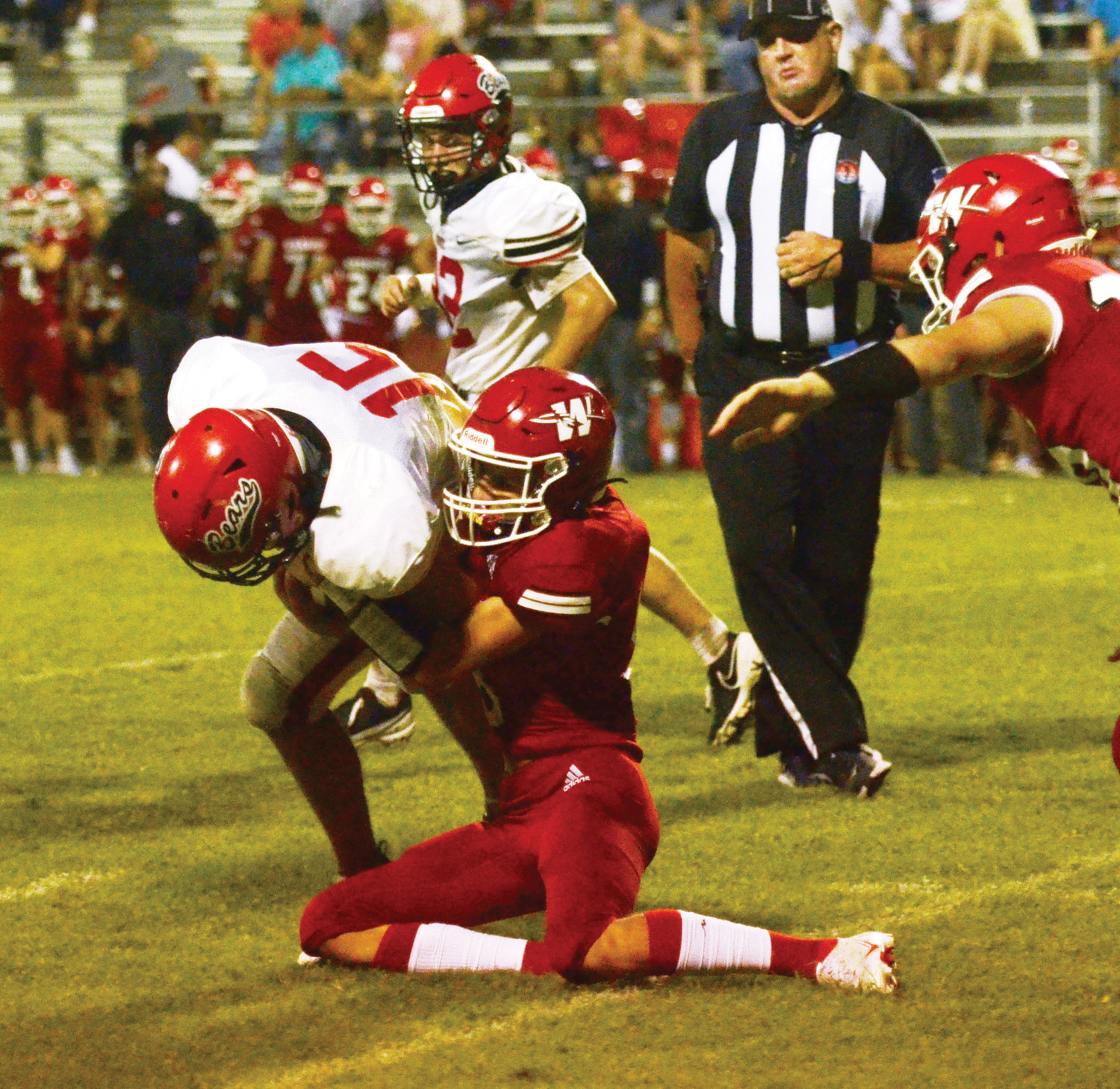 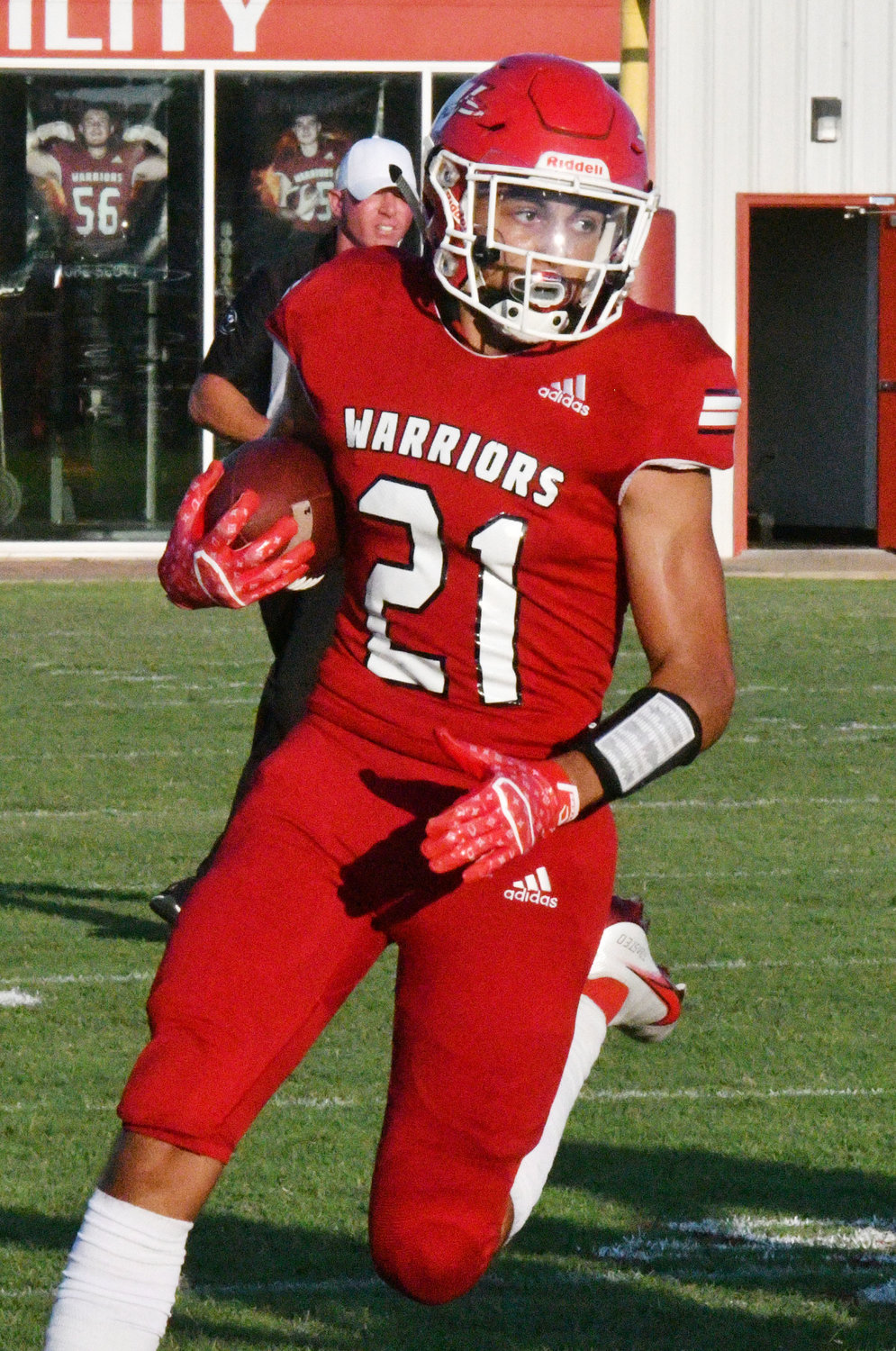 It took Washington’s defense a couple of offensive series by Pawnee last Friday night to get its footing but once it did they controlled the Black Bears’ offense while the Warriors clicked on offense.

The end result was a convincing 41-6 opening game victory for Washington that sets up a showdown Friday night when Sulphur comes to town.

Layne Spaulding had 15 tackles and Rhett Vaughn finished with 11 tackles and those two players only played in the first half.

“Jake Wells played about 2 1/2 quarters and had 10 tackles so all three of our starting linebackers finished with double digit tackles,” Beller said.

Beller said on Pawnee’s first drive his defensive line didn’t play all that well but the rotation helped Washington to start wearing them down.

Pawnee finished the night with 230 yards of offense but they make 190 of those yards in the first quarter.

“We gave up 130 yards on their first two drives but after that we did a great job of controlling their offense,” the coach said.

“We came in feeling we could throw the ball on them and Major did a great job early,” head coach Brad Beller said.

Cantrell finished the night completing 7-10 passes for 155 yards and a touchdown.

“We had a lot of passing yards called back due to penalties and we had some bad snaps that cost Major a lot of rushing yards,” the coach said.

“The best thing about our passing attack was of the seven completions they went to five different receivers. We also had 10 people rush the football,” Beller said.

Cantrell ended the night rushing three times for 41 yards but the team’s leading rusher was Cole Scott who finished with 124 yards and two touchdowns on 11 carries.

“The driving force is our offensive line,” Beller said. “We were able to keep people fresh and overall I was very, very pleased with their execution.”

“In our rotation at one point we had four sophomores playing in the offensive line and continued to execute well up inside,” Beller said.

Cantrell kick-started the Washington scoring on a 47 yard touchdown run in the first quarter followed by a 39 yard touchdown pass to Lane Steele later in the period.

Jaxon Hendrix tallied in the fourth stanza on a nine yard run. Hudson Howard closed out the Washington scoring in the final period on a 17 yard run.

Sulphur will pay a call to Reed Field Friday with kickoff set for 7 p.m.

The Bulldogs are coming off a 28-0 whitewashing at the hands of Tuttle.

“They had some opportunities in the first half but could not capitalize,” Beller said.

The Bulldogs are still a smash-mouth run oriented team but do so out of the shotgun.

“They still have a fullback inside but move him around,” the coach said. “They are very physical up front on both sides of the ball.”

“The key for us is to match their intensity and their physicality and make sure we take care of the football,” Beller said.

Washington Head Coach Brad Beller nominated Cole Scott as the Offensive Player of the week for his 124 yards rushing on 11 carries and two touchdowns.

Beller nominated Jordan Vanya as the Offensive Lineman of the Week. He graded out at 85 percent against Pawnee.

Getting the nod as the Defensive Player of the Week is Layne Spaulding, who made 15 tackles against Pawnee in only two quarters of work.

Hayden Milner was nominated as the Defensive Lineman of the Week. He had eight stops against the Black Bears.