Battle for the Bridge

Lex and Purcell tee it up at 7 p.m. at Conger Field 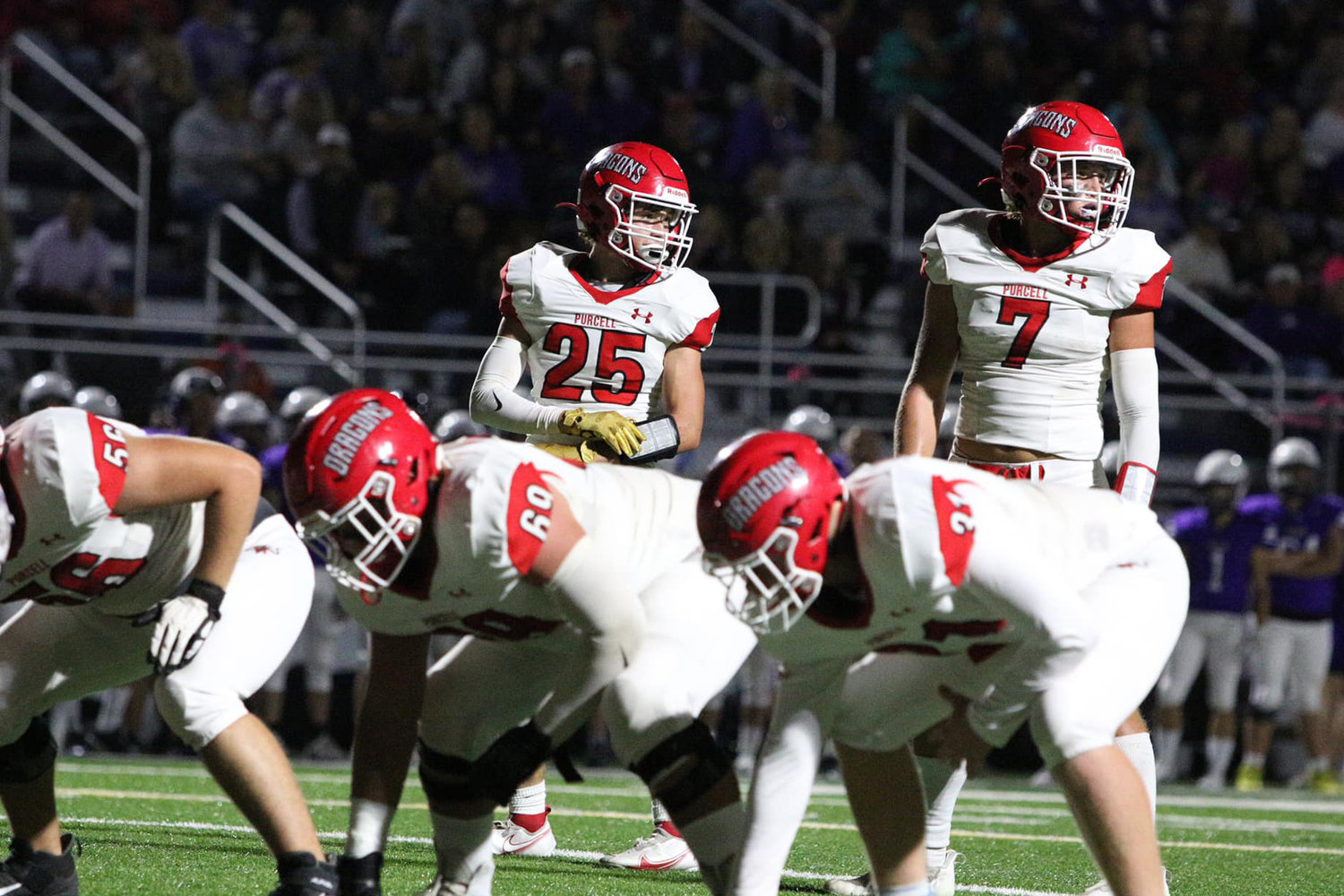 Boston Knowles (25) and Creed Smith (7) look to the sidelines behind Jace Clary (56), Brendan Bacon (69) and Brody Holder (31) during last week’s game against CCS. The Dragons lost to the Royals 38-17 and host Lexington in the Battle for the Bridge Friday night at 7 p.m.
Kim Bacon 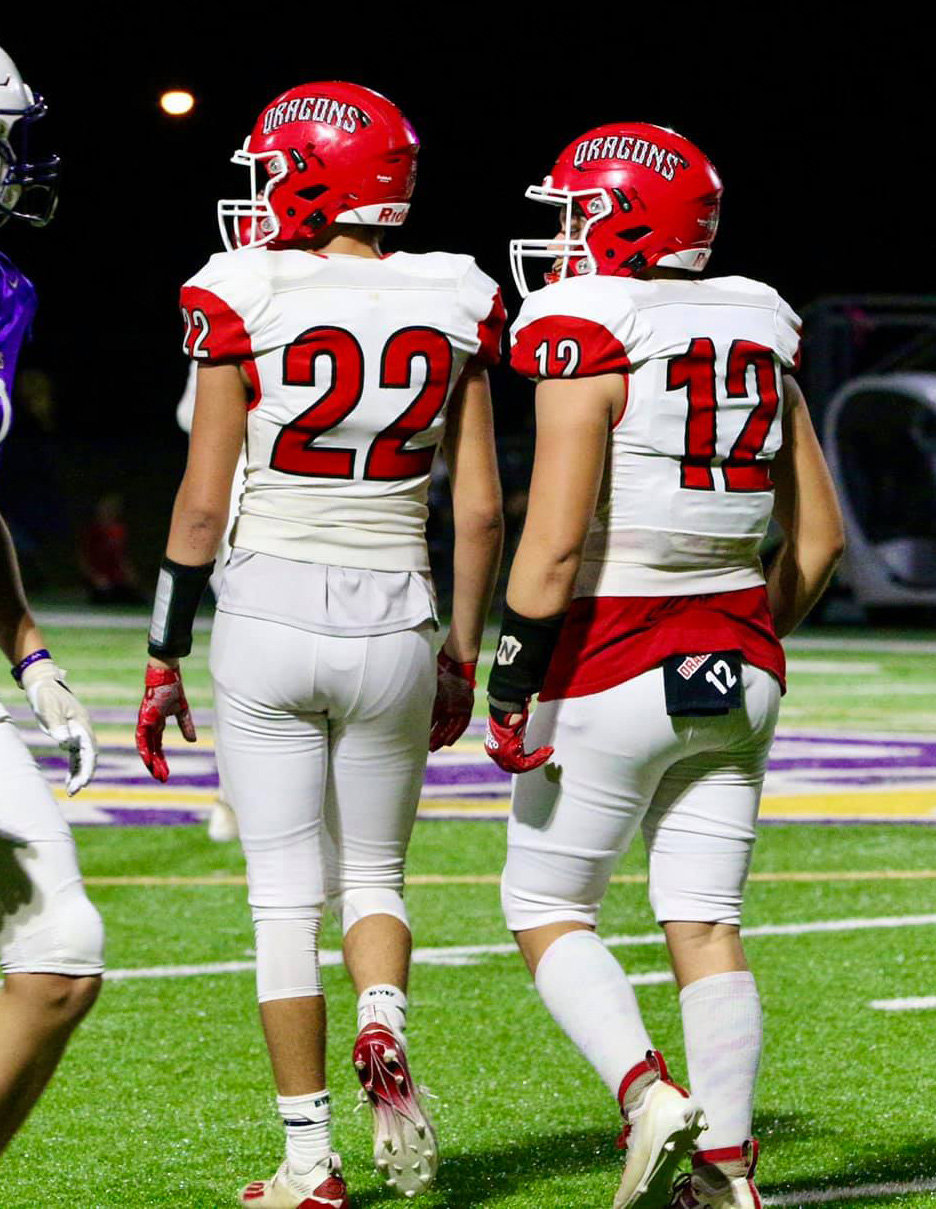 Payson Purcell (22) and Zicorrie Davis (12) survey the field during Purcell’s loss to CCS last Friday. Davis finished the game with 13 tackles and two sacks while Purcell registered 10 tackles of his own.
Kim Bacon
Previous Next
Posted Thursday, October 28, 2021 9:00 am

We expect them to come over and compete with us. They always do.”
Tracy Scott, Purcell head football coach
John D. Montgomery

Friday night is the annual Battle for the Bridge when Lexington and Purcell renew their long rivalry.

Kickoff for the contest will be 7 p.m.

Both teams are coming off losses last week looking to get back into the victory column.

Lexington brings a 3-5 mark into the game while the Dragons are 5-3.

The Bulldogs operate out of a spread formation on offense and run multiple defenses.

They utilize a 3-4 and will switch back to a 4-2 at times, according to Purcell coaches.

“The key for us is to take care of us and move the chains,” Purcell Head Coach Tracy Scott said. “We’ve got to get after them on defense. We expect them to come over and compete with us. They always do.”

Purcell had things going its way early in the third quarter in last week’s game at Community Christian School.

They had a 17-14 lead and had forced CCS to punt to begin the second half and were driving near midfield. But on a third and one, a fumbled center snap thwarted the drive and CCS took advantage.

The Dragons threw an interception on their next possession and things went south. They Royals went on to pin a 38-17 loss on Purcell.

For the night the Dragons were intercepted twice and lost the one fumble.

Scott said a blown coverage led to one CCS touchdown and then the Royals hit a back out of the backfield for another.

The coach praised the play of his linebacking corps, led by Zicorrie Davis with 13 tackles and two sacks. Creed Smith was right on his heels with 12 tackles and a quarterback hurry. Brodrick Smith had eight stops.

“And our safeties Payson Purcell and Kash Guthmueller both played well,” Scott said.

Purcell had 10 tackles, a number matched by Titus Mason. Guthmueller was in on seven tackles and broke up a pass. Jose Ochoa and Kevin Lawson both had eight stops.

Xander Springael toed a 28-yard field goal to begin the Dragon scoring. Creed connected with Mason for a seven yard touchdown also in the first quarter and Smith scored on a one yard plunge in the second period.

“In the second half they started running their zone read. Their quarterback is a big kid that’s hard to bring down,” Scott said.

“The fumbled snap changed momentum and we couldn’t get it back,” the coach said. “Our offense moved the ball in the first half. We had a touchdown pass to Titus that was called back. We turned the ball over and were in catchup mode which is not good.”

Nominated as the Defensive Lineman of the Week was Kevin Lawson, who had eight tackles against CCS.