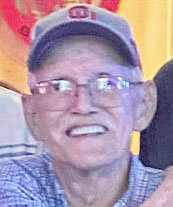 He passed away at the home of his daughter Dedra Putchaven in Norman, Oklahoma, surrounded by his family at the age of 72 years 7 months and 20 days.

He worked as a Production Manager for Uniroyal until retirement. He was a member of the Stratford First Baptist Church. He and Cathy moved to Purcell 10 years ago to be closer to family.

After the loss of his wife Cathy, Argie enjoyed dinner with his sister Charlene and husband John everyday. He made a great group of friends in Purcell and they spent time at The Belle Starr quite often.

Respected and admired by all who knew him. But his most joy was his life with Cathy and pride in his two children who he always bragged about them graduating from the University of Oklahoma and having successful careers. He also enjoyed fishing and collecting guns.

He was preceded in death by his parents, W.D. & Lessie Butler; wife, Cathy, and brother, Cleo.

He is survived by his daughter, Dedra Putchaven and husband, Greg, of Norman, Okla.; son, Chad Butler and wife, Tamra, of Argyle, Texas; five grandchildren, Logan and London Classen and Jake, Creed and Abryenne Butler; sister, Charlene Ott and husband, John, of Purcell, Oklahoma, and his best friend, Jersey Girl.

Funeral services willl be held at 2 p.m. Thursday, September 15, 2022 in DeArman/Pickard Chapel in Stratford, Okla., with the Rev. Forest Weast officiating. Interment will be in the McGee Cemetery in Stratford.